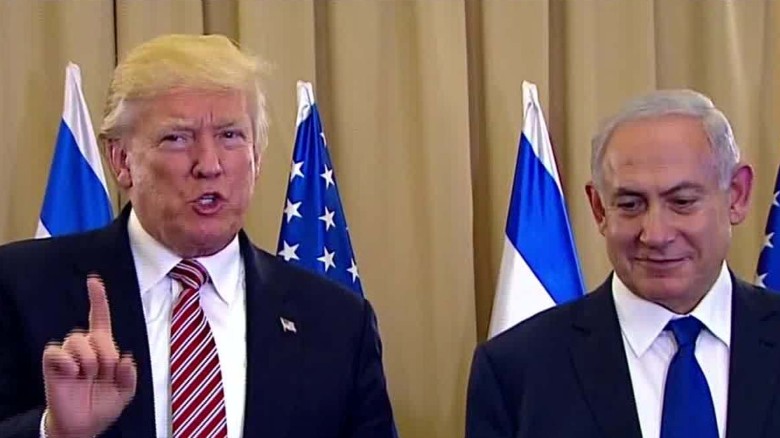 With one tweet of 35 words, Donald Trump changed almost 40 years of US policy towards Israel and Syria:

After 52 years it is time for the United States to fully recognize Israel’s Sovereignty over the Golan Heights, which is of critical strategic and security importance to the State of Israel and Regional Stability!

As with other Trump impulses, such as his sudden order in December to withdraw all US troops from Syria, no Administration official appeared to have beenconsulted. Hours earlier, Secretary of State Mike Pompeo said from Jerusalem that there was no change in the US position delines to recognize Israel’s 1981 annexation of the Heights. His appearance alongside Israeli Prime Minister Benjamin Netanyahu was delayed for almost an hour for Pompeo to assessed the suddenly-altered situation.

Of course, White House officials would scramble to gloss the Twitter announcement of their boss. One insisted that Trump had spoken with National Security Advisor John Bolton, Trump’s son-in-law and advisor Jared Kushner, and Jason Greenblatt, the special representative for Middle East negotiations.

In a curiously defensive assertion, the official said, “There’s no obvious constituency not to do this.”

Others wheeled out Trump’s vague references to “security” and “stability”. Pompeo recovered to say the declaration was “historic” and “bold”.

But make no mistake. Trump’s priority had nothing to do with a Middle East strategy. His impulse was fed by three desires: the re-election of Netanyahu on April 9, his own 2020 campaign and the need to constantly stroke his own ego.

Israel seized the Golan in the 1967 Arab-Israeli War. Fourteen years later, just before its entry into Lebanon’s civil war, the Government of Menachem Begin consolidated its hold with the declaration of sovereignty.

Few in the international community accepted. The Reagan Administration, despite its pro-Israel rhetoric, suspended a strategic cooperation agreement with Tel Aviv. The US joined every member of the UN Security Council in Resolution 497, calling the annexation “null and void and without international legal effect”.

The Golan remained in a de facto division, with a UN observer force seeking to prevent any clashes. The Assad regime’s response to the 2011 Syrian uprising, killing 100,000s and displacing more than 11 million, threatened to spill over into the area as the UN force withdrew. But the Israeli military presence deterred any regime action, and Tel Aviv secured an agreement with Russia’s Vladimir Putin to keep Iran and Hezbollah out of the area.

But Trump’s immediate concern is not with that interplay of Syrian, Israel, and external actors. As with his order to move the US Embassy to Jerusalem, his focus is on a side-by-side declaration linking his fortunes and those of Netanyahu.

The formal indictments of the Prime Minister for fraud, bribery, and breach of trust await a hearing. He may face a criminal graft investigation over the state purchase of naval vessels and submarines from German shipbuilder ThyssenKrupp, in one of the biggest cases in Israeli history. Polls have him neck-and-neck with the Blue and White Party of former general Benny Gantz and former Finance Minister Yair Lapid.

But on Thursday, Netanyahu could be exultant, “President Trump has just made history. He did it again.”

Trump will hope that exaltation boosts his own re-election prospects in a year’s time. His approval ratings are doggedly sticking at just over 40%. They haven’t collapsed despite multiple criminal investigations, the furor over anti-immigration policies, and Trump’s Government shutdown — but neither have been risen amid an economy fueled by December 2017 tax cuts.

Thus an appeal to a domestic constituency which traditionally votes Democratic — with few exceptions over the past century, Jewish voters have given more than 70% support to the Democrat candidate, including 71% for Hillary Clinton in 2016.

Trump’s calculation may be misguided. The Jewish vote is largely propelled by social issues at home, rather than Israel abroad: only 9% cited the latter as the primary cause for their vote in the last Presidential election. However, “Israel-first” could also resonate with non-Jews, and pro-Trump Jewish donors and lobbies could be significant in the contest for the US electorate.

Then there’s the far-from-insignificant place of Trump’s ego. As is often the case with his orders and proclamations, he tried to portray his unique place in US history on Thursday. Throwing in the falsehood that all of his predecessors — as opposed to none — had pushed for recognition of Israeli sovereignty over the Golan, he said, “Every President has said ‘do that’. I’m the one that gets it done.”

Despite the immediate headlines, Trump’s tweet has little significance for the Golan. The international community, including the UN, is not going to shift its position on the status of the Heights. While Netanyahu may be boosted, the Israeli presence will continue to rest on the strength of arms, the expansion of settlements, and the acceptance of actors like Russia.

But that does not mean the declaration is without effect. Trump’s “stability” is likely to make a further contribution to regional instability.

The Assad regime, having killed 100,000s of its citizens and displaced more than 11 million, will seize upon the opportunity to cover its repression and hold on power. The Syrian Foreign Ministry’s pledge to regain the Golan is bluff, as the regime’s military can’t even secure its President without the lead of Russia, Iran, and Hezbollah. But Bashar al-Assad and his inner circle will play the victim over the Heights for their narrative that the US and Israel are the supporters of “terrorism” and aggression.

Trump’s message also casts a dark shadow over the still-to-be-presented Israel-Palestine “peace plan” of his son-in-law Jared Kushner. Some will rightly note that the plan, if it exists, is already a zombie proposal. However, the Golan declaration on top of the Embassy move confirms a Trump Administration that has reduced its real objective to one Israeli sitting in the Prime Minister’s chair.

And if one wants to take Trump’s “bigly” view of his influence, one can look beyond the Middle East. Martin Indyk, a former US Ambassador to Israel, noted yesterday, “[President Vladimir] Putin will use this as a pretext to justify Russia’s annexation of Crimea.”

That, of course, may not cause Trump – who “gets it done” – the loss of a moment’s sleep, even as some of his advisors and almost everyone across the Middle East are worried sick.