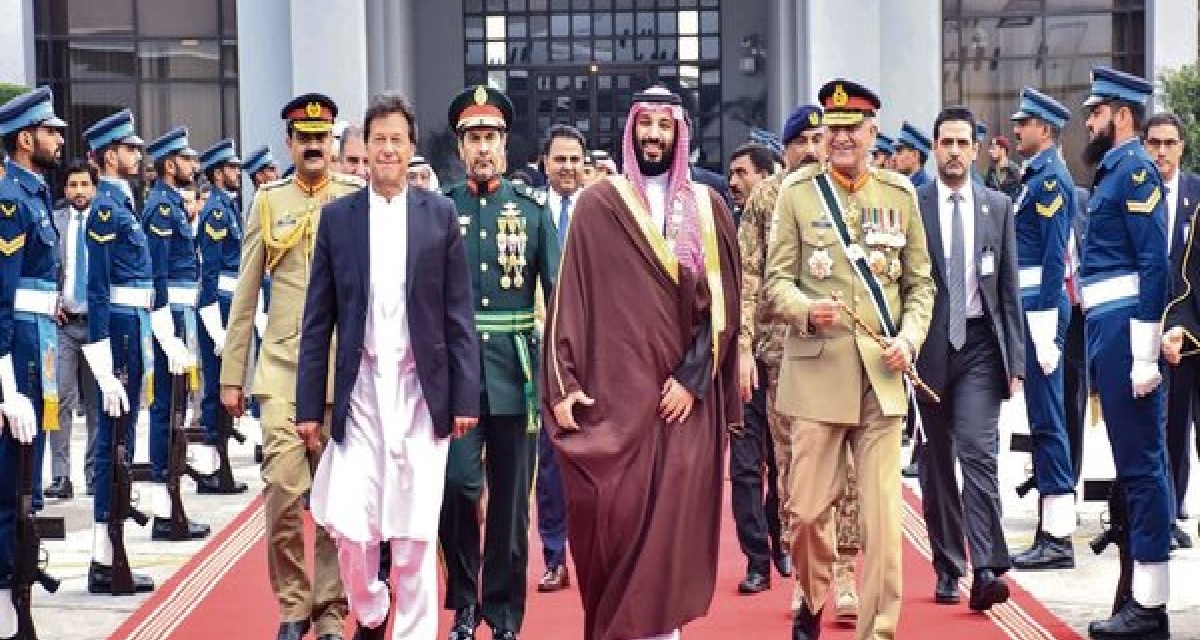 Originally posted on March 3 and now published in partnership with The Conversation:

The relationships and their importance are captured in a single, compelling image. To the left of visiting Saudi Crown Prince Mohammad bin Salman is Pakistani Prime Minister Imran Khan, to the right is the head of the army, Gen. Qamar Javed Bajwa. The three men are smiling, surrounded by the trappings of Islamabad’s military and ceremony, and marching in step.

For the first time in many years, Pakistan’s government and military leadership see each other as equals worthy of cooperation. It is a relationship for stability, even amid economic challenges.

That stability seeks to project itself through a revitalized Pakistan foreign policy — one that can put troops and a diplomatic presence in the Gulf, while billions in Saudi aid and investment promise relief from the straightjacket of the troubled economy.

The understanding established between Imran Khan and Gen. Bajwa is a revolution in the state of the civil-military relationship in Pakistan. It has ended a decade of division in outlook on foreign policy and national security.

And Mohammad bin Salman, who told his audience to consider him “an Ambassador for Pakistan”, is both conduit and beneficiary for the relationship.

The Pakistani-Saudi relationship has largely been an inter-personal affair between power holders on both sides, taking on a strategic dynamic through security cooperation. It has helped invest the Pakistani military as an essential institution in Islamabad’s regional maneuvers.

But since the ousting of President Pervez Musharaf in 2008, the relationship has been unsettled. It fractured in 2015 when Pakistan’s Parliament rejected a Saudi request for Pakistani troops to take part in the Saudi-led military intervention in Yemen’s civil war.

The Pakistani military strove to repair the break. It assured the Saudis over Pakistan’s security commitments regarding the Kingdom. It projected Pakistan as a strategic conduit between the Middle East and South Asia, countering Islamabad’s isolation in the international arena to see economic and political benefits. The connection with Riyadh would also deal with a strategic void that could have been filled by Pakistan’s arch-rival India.

To restore confidence, Pakistan joined the Islamic Military Counter-Terrorism Coalition, with retiring Army Chief Gen. Raheel Sharif appointed Commander-in-Chief. Pakistan’s participation in the “Thunder of the North” military exercise with Saudi Arabia and its allies, and joint exercises between the special forces of both countries indicated an increased level of commitment between the security apparatuses. Islamabad cemented the reconciliation with the despatch of more than 1000 troops to the Kingdom, in addition to 1600 already deployed on a training and advice mission — making Pakistan the only country with a significant foreign force within Saudi Arabia.

Still, without a secure political-military connection in Islamabad, the repaired relationship was limited. The Saudis were not willing to make a significant financial investment without the assurance of a Prime Minister that would fully support the bilateral initiative.

Then Imran was elected Prime Minister last August. And Mohammad bin Salman, facing his own international tensions after the murder of journalist Jamal Khashoggi, soon came with $20 billion.

But Islamabad has to negotiate the wider geo-politics terrain. The exaltation of MBS has not been well received in Iran, Pakistan’s neighbor and Saudi’s archrival in the Middle East. Unease was compounded by the killing of 27 Revolutionary Guards personnel in a bus bombing near the Pakistan border, days before the Crown Prince arrived in Islamabad.

The attack was carried out by Baluch insurgents, but Tehran quickly warned “Saudi Arabia and the UAE, which carry out these acts on orders from the US and the Zionist regime”. It then turned to Islamabad: “If Pakistan does not punish [the insurgents], we will definitely take reparative measures against this counter-revolutionary force in the near future.”

Then there is the unexpected escalation of Pakistani tensions with India. On February 26, Indian warplanes allegedly bombed since Pakistan, retaliating for an attack by insurgents that killed 40 Indian personnel in the disputed area of Kashmir on February 14. Pakistan downed two Indian jet fighters and captured a pilot.

So if relations have been repaired, nothing has been resolved in the kaleidoscope of Central Asia and the Middle East. Imran may have forged a way forward with the Pakistani military, and they may restored a partnership with the Saudi monarchy — but how strong will the bonds be if it is instability, involving Tehran or Delhi, rather than stability that is in the near-future?