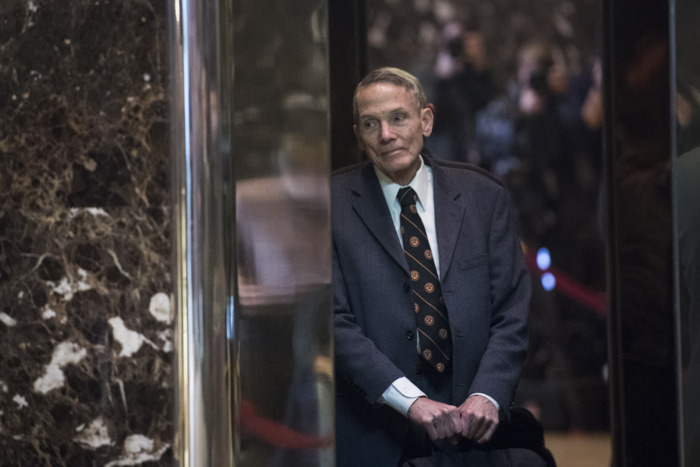 The White House is creating an ad hoc panel to counter the US Government’s scientific assessments of climate change.

The Trump is seeking, through the National Security Council, to reject conclusions that the burning of fossil fuels is harming the globe, according to “three senior administration officials”. Scientists who question the severity of climate change and the contribution by human activity are being recruited.

Top administration officials discussed the initiative Friday in the White House Situation Room. It is a modification of an earlier plan for a federal advisory panel on climate and national security, promoted by William Happer, an NSC senior director and a physicist who denies that carbon dioxide can damage the planet.

Before joining the Administration last fall, Happer chaired the CO2 Coalition — seeking to declare the “important contribution made by carbon dioxide to our lives and the economy” — which has received money from hard-right organizations such as the Mercer Family Foundation and the Charles Koch Institute and from donors with fossil fuel interests.

During the meeting, Deputy National Security Advisor Charles Kupperman said Donald Trump was upset at the Administration’s National Climate Assessment, issued in November. Kupperman said Congressional Democrats had used the report, the product of more than a dozen agencies, to bolster the case for cutting carbon emissions as part of a Green New Deal.

Senior officials, including Acting Interior Secretary David Bernhardt, debated how to establish a group of researchers that could take on recent federal climate reports. More than one participant suggested they might not be able to create an independent outside panel that would question the findings of the National Climate Assessment and other key studies.

The White House panel will not be subject to the same level of public disclosure as a formal advisory committee, which is required to meet in public, is subject to public records requests, and must include a representative membership.

“Officials familiar with the plan” said the panel will not be asked to consider recent intelligence community assessments of climate change.

A “senior administration official” said Trump was looking for “a mixture of opinions” as he disputed the National Climate Assessment: “The President wants people to be able to decide for themselves.”

Over 20 years, Government studies have identified climate change as a serious threat. In 2003 a Pentagon-commissioned report, to examine how the country’s defense capabilities would be affected, concluded that the issue “should be elevated beyond a scientific debate to a US national security concern”.

Last year, a military-funded study warned sea level rise and other climate impacts could make more than a thousand low-lying islands in the Pacific Ocean, including an atoll where a missile defense site is located. “uninhabitable” by 2050.

Trump, a climate change denier, has said the issue is a hoax whipped up by the Chinese. He sneered last month during a polar vortex that struck the midwestern US:

In the beautiful Midwest, windchill temperatures are reaching minus 60 degrees, the coldest ever recorded. In coming days, expected to get even colder. People can’t last outside even for minutes. What the hell is going on with Global Waming? Please come back fast, we need you!