State of the Union: Women in White Stole Trump’s night – and Will Haunt Him All Year 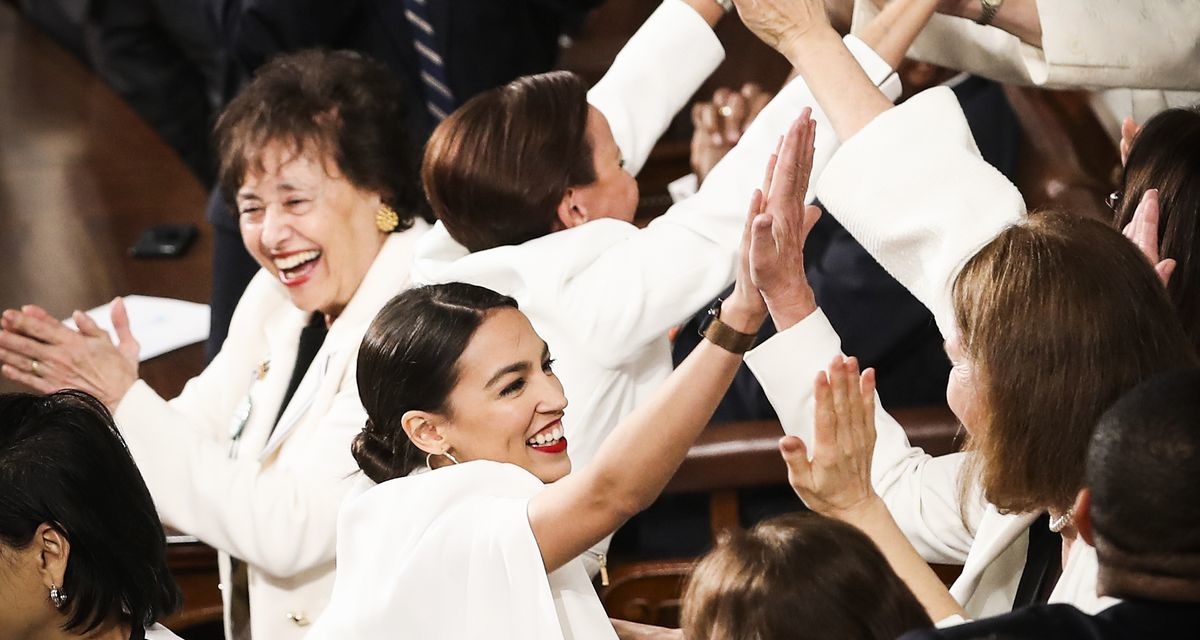 Democratic Congresswomen high-five each other during Donald Trump’s State of the Union address, February 5, 2019 (Win McNamee/Getty)

The State of the Union headline was not in Donald Trump’s script, which initially leashed him to a teleprompter before a joint session of Congress on Tuesday night.

The White House had trailed that the speech, given a week late because of the Trump Shutdown of the Federal Government, would emphasize a bipartisan approach to politics. So Trump — more like a newcomer carefully reading through an audition than the flamboyant actor at his rallies and impromptu press conferences — ticked off lines that could have been given by any of his predecessors.

“Millions of our fellow citizens are watching us, gathered in this great chamber, hoping we will govern not as two parties, but as one nation,” he opened. “Victory is winning for our country” followed. And “Make America Great Again” was reworked as “Tonight I ask you to choose greatness.”

Trump sheltered in the safety of the introductions of World War II veterans and Apollo 11 astronaut Buzz Aldrin. He warmed up and loosened up a bit as he claimed credit for everything from the American economy to the release of former inmates Alice Johnson and Matthew Charles, who were also in the audience.

But the story of the day was the off-script Trump. Freed from the shackles of feigning the bipartisan, Trump spent a lunch with reporters assailing Democrats. Former Vice President and possible Presidential candidate Joe Biden is “dumb”, Senate Minority Leader Chuck Schumer a “son of a bitch”.

And the story of the night was the woman behind Trump on the podium. House Speaker Nancy Pelosi, the legislator who uninvited and re-invited Trump to give the State of the Union address, silently exercised her new authority as leader of the Democrat-controlled chamber.

Pelosi gave courteous applause at points during the performance. But for much of it, she monitored Trump like an instructor watching a borderline student. She quietly marked his 15-minute peroration on immigration, filled with Trump’s boilerplate distortions about the “tremendous onslaught” of “large, organized caravans” with many women and children. She gave a small shake of the head as he recited hyperbole about his immigrant strawman, “the savage gang MS-13”. She never broke into a gaze of disbelief as the claims got bigger and wilder, as he introduced three women whose relative was killed by an “illegal alien”. She just continued the silent marking of the man in front of her.

Because Pelosi knew that on Wednesday morning she would be back in her role as Speaker, in a House of Representatives that is part of the net — from the Trump-Russia investigation to an often-chaotic White House to Senate Republicans rattled by the shutdown and Trump’s threat of a national emergency — closing on Trump.

Look in Front of You, Mr Trump

The story in front of Trump were the white-clad women of Congress, many of them taking seats for the first time this January.

As he got into his script, with more swagger and jabs in the words, Trump played to the Republicans who rallied to their cues. They backed him in his biggest swing of the night, a “partisan investigations” attempt to knock back Trump-Russia. When they offered an impromptu opportunity with “USA, USA”, Trump seized it, “That sounds so good.” Buoyed, he gave a finger jab at the Democrats as he claimed the achievement of making the US a “net exporter of energy”.

But the cameras were often on the 131 women sworn into the 116th Congress. Like the woman behind Trump, they monitored the Chief Executive rather than deferred to him. They stood in their own tribute to “greatness” but remained in their seats during Trump’s more-frequent invocations of division and confrontation, including over his Wall with Mexico.

And then they seized the evening.

Trump, with his chequered personal and political record over women, again reached for self-congratulation: “No one has benefited more from our thriving economy than women, who have filled 58% of the new jobs created in the last year.”

The 131 women leapt to their feet. They whooped, danced, and high-fived each other. They celebrated.

Appearing surprised and unsettled, Trump exclaimed, “You were not supposed to do that.” He tried to regain attention to himself: “All Americans can be proud that we have more women in the workforce than ever before.”

Trump tried one more time: “We also have more women serving in Congress than ever before.”

Every eye on them rather than the President, the women hugged each other, waved, and danced some more.

Facing the wave, the Republicans pushed it with the mantra, “USA, USA, USA”.

But rather than giving way to a one-sided claim of the nation, the women took up the chant. They shouted it, danced to it.

Trump continued through his script. He announced another summit with North Korea’s Kim Jong-un, in Vietnam at the end of this month. He introduced a 10-year-old girl who defeated brain cancer. He spoke about “babies ripped from their mother’s womb, moments from birth”. But his State of the Union was done for the night.

And his rule of the state might be done for good. Behind him was a new political reality: one woman with her own control. In front of him, the many others not just blocking his path – likely to be a troubled one in 2019 – but forging their own.