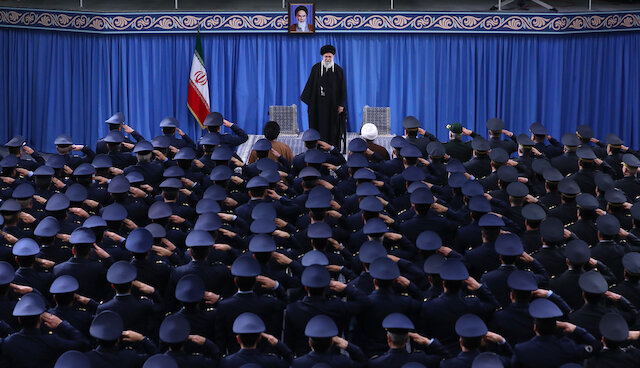 Iran’s Supreme Leader has celebrated the 40th anniversary of the Islamic Revolution by wishing death upon Donald Trump and his senior officials.

Speaking to a group of Iranian air force officers on Friday, Ayatollah Khamenei explained, “I have nothing against the American people. Death to America means death to America’s leaders, who happen to be these individuals at this time.” He named Trump, National Security Advisor John Bolton, and Secretary of State Mike Pompeo.

Facing US sanctions on a crippled Iranian economy, Khamenei denounced American “vileness and viciousness”: “The US is the embodiment of evil and violence. It creates crises and wages wars to serve its interests, yet the Americans complain about us chanting Death to America.”

Burying A Link With Europe

Significantly, Khamenei also had angry words for European leaders: “We cannot trust and respect Europeans. We have tried them many times, the French, the British, the others. Every one of them in their own way.”

The declaration marked the demise of Iranian attempts at a vital economic link with Europe, bypassing the comprehensive US sanctions imposed on November 5.

Last week, after four months of planning, the European Commission announced a limited Special Purpose Vehicle for non-dollar trade in Iranian oil and other commodities and goods.

But the initial phase, requiring further months to complete, covered only pharmaceuticals, medical supplies, and agricultural products to Iran. The Commission linked the arrangement to criticism of Iran’s missile development and activities in the Middle East.

After first cautiously welcoming the advance, Iranian officials turned against the SPV this week over the “humiliating conditions”.

Khamenei confirmed the rejection on Friday, “There is a discussion concerning the Europeans and their proposals. My advice would be that they should not be trusted, just like the U.S. cannot be trusted.”

These days there's a talk of Europeans & their offers. My advice is: like US, they shouldn't be trusted either. I don't say we shouldn't have relations with them. I'm talking about trusting them. They can’t be trusted. We’ve repeatedly seen that. France, UK, etc.; each in a way.

He told the audience:

Now, I am not saying we should not have relations with Europeans. But trust is still an issue. They attack the people and blind them in the streets of Paris and then outrageously demand [respect for] human rights from us.

The Supreme Leader chided French leaders amid “Yellow Vests” protests over economic conditions, “Do you know human rights at all? They did not understand human rights, not today, not in the past, throughout their history.”