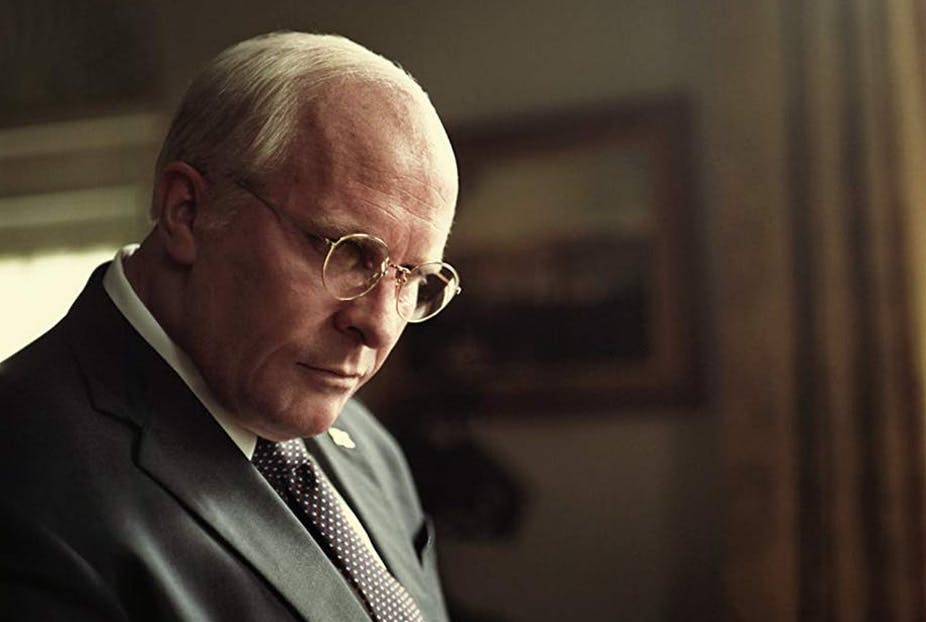 How do you capture the essence of power? Christian Bale as Dick Cheney

Early in Adam McKay’s Vice, the film invokes the quote, “Beware the quiet man. For while others speak, he watches. And while others act, he plans. And when they finally rest…he strikes.

And already Dick Cheney is defeating the attempt to cage him in Vice’s 132 minutes of history, politics, and musings.

Cheney was far from quiet before he became George W. Bush’s Vice President in 2001. Perhaps he was not prominent when he became the youngest White House Chief of Staff in history, under Gerald Ford in 1975. Maybe his political maneuvering as Congressman from Wyoming didn’t make headlines. But as Secretary of Defense for George H.W. Bush and then as CEO of Halliburton, the multinational oil services company, he was far from quiet with the trademark growl out of the side of his mouth.

And there was nothing silent about his grab for power as Vice President from 2001. Even before 9-11, he was carrying out the operation in plain sight.

It wasn’t that we didn’t know. It’s just that no one stopped him.

Christian Bale is phenomenal as Cheney. Every mannerism, every silence as well as utterance, is an uncanny copy of the original. At times, Bale succeeds in the near-impossible: making the Dark Prince human.

But this only elevates the problem for McKay, who captured the 2008 financial crash in The Big Short: how do you capture the raw seizure and exercise of power by a dedicated man who has almost no other priority?

The writer/director knows the essential. As soon as he took office as Vice President, Cheney sought an unfettered Executive — beyond Congress, beyond the courts, beyond public opinion. His quest was further propelled, not by personal gain but by fear: the attacks of September 11, followed by an autumn of anthrax in the posts and snipers picking off random people near Washington. Men would be “renditioned” to face torture and unending detention from Guantanamo to “black sites” in Eastern Europe and Muammar Qaddafi’s and Bashar al-Assad’s prisons. Americans would be surveilled, without any limit, on their phones and on their computers. Saddam Hussein would be overthrown.

McKay’s pursuit is a sprawl across 50 years, from Cheney’s entry in 1960s Washington to his retirement in Wyoming. To trap his quarry, the director tries every gimmick. There is a mock-Shakespearean interlude between Cheney and his wife Lynne, excellently rendered by Amy Adams, reversing the Bard: Lynne is the updated Lady Macbeth urging her husband to refuse the vice presidential opportunity, Dick is the manipulator, grasping for power.

There is a faux ending in which credits roll as Cheney, having thought better of his ambition, relaxes in bucolic retirement — a happy family and a far happier America than what is to come. And throughout is the narrator to give us a Big Short-style disquisition on the down-and-dirty of US history and politics, letting us in on the secrets – even though they weren’t secret at the time.

When you chase your man — especially a devious and no-holds-barred man like Cheney — across such an expanse, he will elude you. McKay’s terrain has huge gaps. There is nothing on Cheney’s time as Secretary of Defense, including his lesson from the 1991 Gulf War that he was wrong to support the halt of operations before Saddam fell. Halliburton gets only a couple of passing mentions, missing the late-1990s training it gave Cheney in the quest for control of oil and gas and how to distribute them.

Then there are the caricatures. Steve Carell is fine as the political street-fighter Donald Rumsfeld, even if the performance is more Carell than Rumsfeld. But Sam Rockwell’s George W. Bush is the broad-stroke buffoon, putting his feet on the desk, thinking about baseball, and giving a “Hot Damn” when Cheney completes the sharkish maneuver to become Vice President — and, completing the caricature, the real man in the White House. It may be a comforting portrayal, with power given the sheen of bumbling farce, but it erases the complexity of Bush and thus the relationship at the core of the power grab.

The Essence of the Moment

How do you capture the essence of power? It lies not in the sprawl, but in the moment — that moment when the pursuit of the absolute is crystallized, or alternatively when the powerful is confronted with the folly of the quest.

McKay senses this. He opens the film with the moment when, with Bush flying across a stricken US on September 11, 2001, Cheney was in the Situation Room as Acting President. But, even if Cheney was ordering American warplanes to shoot down passenger aircraft to prevent further attacks, this was a reactive moment — soon the Vice President is far from powerful as the Secret Service rush him to a protective bunker.

No, that moment came days later when Cheney and his staff, along with Rumsfeld and his, built their “unitary power” on the ruins of the World Trade Center. It came when they decided that no law — US or international, Geneva Convention be damned — bound them; that no punishment was too extreme for “enhanced interrogation”; that men, be they guilty, innocent, or in between, could be buried in Guantanamo Bay or a CIA facility halfway around the world; that privacy no longer existed in the US.

McKay never gets us to that moment.

There is another defining scene, an episode not of the political but of the personal. It is the climax of the narrative not only of Dick but of Lynne, the tough, driven woman who rescued her college-dropout boyfriend and supported his rise to power.

When their daughter Mary discloses as a teenager that she is a lesbian, Dick embraces her as Lynne tries to process the disclosure. Mary’s sexuality is kept out of the spotlight.

But when Cheney’s other daughter Liz pursues a US Senate seat in Wyoming in 2013, she is confronted by Mary’s support of same-sex marriage. The family has to decide if Liz would confront, and effectively reject, her sister. She did, in a televised interview — and, since then, Mary Cheney has left unanswered whether she repaired the rift with her family.

Bale portrays Cheney’s anguish as — with Lynne resolutely behind Liz — he tears down the last barrier between the decency of the personal and the betrayals of power. In that moment, he is the father reaping his 30 pieces of Executive silver.

But this moment is also fleeting. Instead, McKay’s blunt hammer falls in a closing soliloquy by Cheney, again riffing off Shakespeare: “I can feel your recriminations and your judgement. And I am fine with it.”

Scott Lucas is Professor of International Politics at the Clinton Institute, University College Dublin; Professor Emeritus of International Politics at the University of Birmingham; and editor-in-chief of EA WorldView. He is a specialist in US and British foreign policy and international relations, especially the Middle East and Iran. Formerly he worked as a journalist in the US, writing for newspapers including the Guardian and The Independent and was an essayist for The New Statesman before he founded EA WorldView in November 2008.