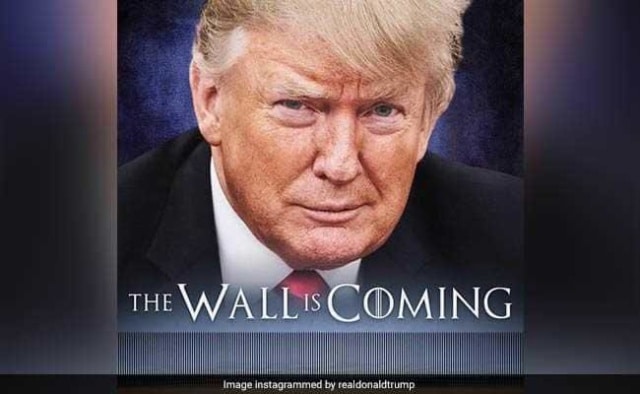 Trying to recover from defeat over his Trump Shutdown of the Federal Government, Donald Trump renews the threat of a national emergency to bypass Congress and get $5.7 billion for his Wall with Mexico.

On Friday, Trump conceded to the reopening of nine Government agencies for three weeks, without a penny of the funds he had demanded for the $25 billion barrier. But trying to save face, he said at the end of the statement from the White House Rose Garden:

If we don’t get a fair deal from Congress, the government will either shut down on Feb. 15, or I will use the powers afforded to me under the laws and Constitution of the United States to address this emergency.

Trump waged a Twitter campaign throughout the weekend, repeating, “BUILD A WALL & CRIME WILL FALL!” He put out false and deceptive statements about “illegal aliens”, migrant “caravans”, and drugs coming into the US, and he expressed frustration with his favorite outlet Fox TV — adding another falsehood about his opinion poll ratings with Hispanic Americans:

Never thought I’d say this but I think @johnrobertsFox and @GillianHTurner @FoxNews have even less understanding of the Wall negotiations than the folks at FAKE NEWS CNN & NBC! Look to final results! Don’t know how my poll numbers are so good, especially up 19% with Hispanics?

But the statements were not only coming from Trump’s Twitter feed. Acting White House Chief of Staff Mick Mulvaney told Fox News Sunday, “The President’s commitment is to defend the nation, and he will do it either with or without Congress.”

“Four people involved in the discussions” said Trump told advisers this weekend that declaring a national emergency may be his best option.

One White House official redefined Trump’s retreat on Friday, saying it was “clearing the deck” for executive action. Several others said Trump is arguing that a national-emergency declaration could pressure Congress to include Wall funding and signal to Republican voters that Trump is using all measures to secure funding.

Trump played down the possibility of a Republican-Democrat agreement over border security and immigration in the next three weeks, telling the Wall Street Journal that the chances of success are “less than 50-50″. He insisted another shutdown is “certainly an option”, doubting that he will accept any deal without the full $5.7 billion for the Wall.

But the White House immediately faced resistance from Republican senators whose concern led to Friday’s retreat on the Trump Shutdown.

Marco Rubio said a national-emergency is a “terrible idea”. Roy Blunt explained, “I happen to agree with the President on barriers at the border and border security as an important first step, but there might be a future President that I don’t agree with that thinks something else is an emergency.”