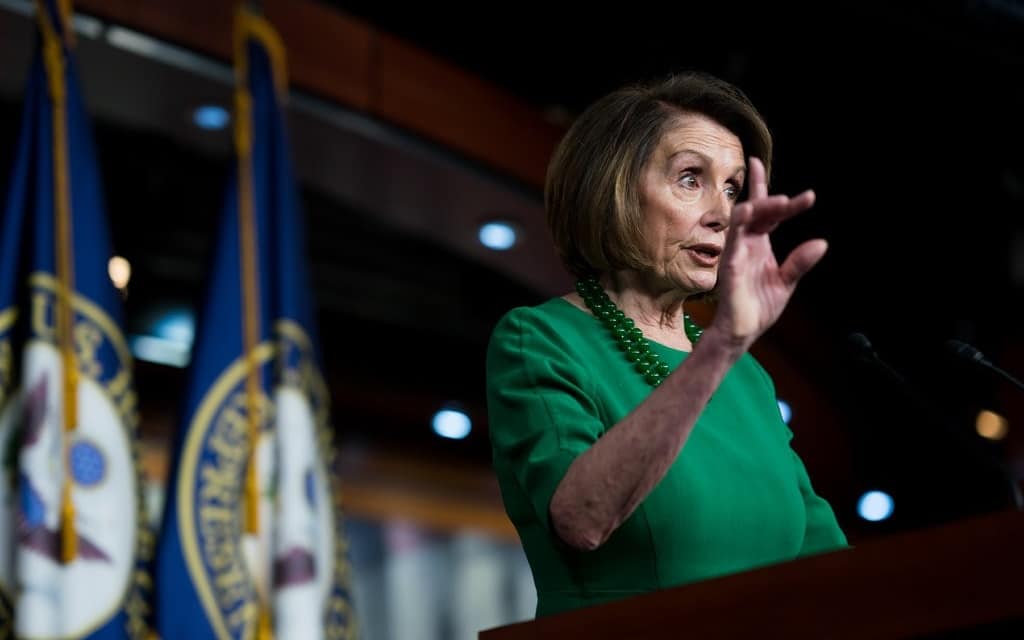 Democrat legislators prepare their attempt to reopen the Federal Government, ending the Trump shutdown without providing funds for Donald Trump’s Wall with Mexico.

Democrats in the House of Represenatives are planning a vote as soon as they take control on Thursday. A bill funding for the Department of Homeland Security and border security will be separated from a continuing resolution providing the money to reopen eight other Government Department through the end of the fiscal year in September.

The border security measure assures funding at current levels through February 8, including $1.3 billion for fencing but no money for Trump’s Wall.

The approach will pose a choice for Trump and Senate Majority Leader Mitch McConnell: either they accept none of the $5.7 billion Trump demanded for his $25 billion Wall, or they keep much of the Governent closed indefinitely — with almost 400,000 Federal employees on unpaid furlough and almost 400,000 working without pay.

If Leader McConnell and Senate Republicans refuse to support the first bill, then they are complicit with President Trump in continuing the Trump shutdown and in holding the health and safety of the American people and workers’ paychecks hostage over the Wall….[Rejection would be] the height of irresponsibility and political cynicism.

Meanwhile, almost alone in the White House, Trump continued to vent anger and frustration via tweets and an interview with pro-Trump outlet Fox.

In the first of six Twitter messages, Trump effectively rejected a compromise in which additional border security money — Democrats are proposing $1.3 billion and the White House $2.5 billion — would include enhanced fencing presented to him as “The Wall”.

He insisted that he must have the 30-foot solid barrier which he promoted throughout the 2016 campaign, falsely saying that Mexico would pay for it.

An all concrete Wall was NEVER ABANDONED, as has been reported by the media. Some areas will be all concrete but the experts at Border Patrol prefer a Wall that is see through (thereby making it possible to see what is happening on both sides). Makes sense to me!

TrumpWatch, Day 710: Trump Digs In for The Wall and Trump Shutdown

But Trump maintained yesterday that there cannot be border security “without a strong and powerful Wall”. He asserted — either in a flagrant lie or comprehensive ignorance — that Mexico’s trade with the US constituted payment for the barrier. Referring to the revised North American Free Trade Agreement, relabeled the US-Mexico-Canada Agreement to satisfy him, he wrote:

MEXICO IS PAYING FOR THE WALL through the many billions of dollars a year that the U.S.A. is saving through the new Trade Deal, the USMCA, that will replace the horrendous NAFTA Trade Deal, which has so badly hurt our Country. Mexico & Canada will also thrive – good for all!

Then Trump launched into an explanation of why plans for border security, always adopted or proposed, could not work with enhanced fencing, electronic monitoring, sensors, and other technology — “the Tech ‘stuff’ is just…meaningless bells & whistles” — when compared with a Wall like a wheel:

…Remember this. Throughout the ages some things NEVER get better and NEVER change. You have Walls and you have Wheels. It was ALWAYS that way and it will ALWAYS be that way! Please explain to the Democrats that there can NEVER be a replacement for a good old fashioned WALL!

Trump has failed to spend 94% of the additional funds allocated for border security during his time in office, preferring instead to campaign for the concrete barrier.

Critics noted another lie issued by Trump on Sunday, when he closed with an attempted comparison of the Washington home of Barack and Michelle Obama with the US-Mexico border:” President and Mrs. Obama built/has a ten foot Wall around their D.C. mansion/compound….The U.S. needs the same thing, slightly larger version!”

There is no such wall around the Obama residence.