Iran Daily: Tehran Gives Up on Europe for Economic Salvation 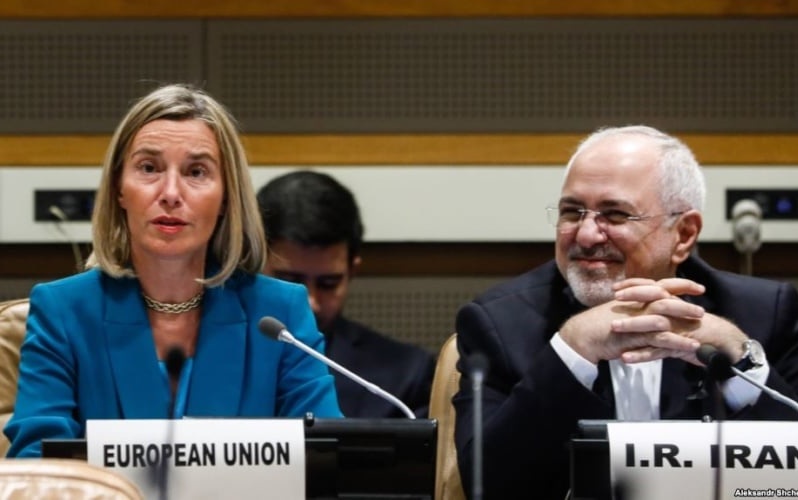 The Iranian Government has signalled the end of its hopes that the European Union can prop up Iran’s economy amid US sanctions.

Days of criticism culminated in a statement by Foreign Minister Mohammad Javad Zarif, made in India on Tuesday. He said the stalled pursuit of a Special Purpose Vehicle, bypassing the US sanctions with non-dollar payments for oil and other commodities and goods, pointed to a change in Tehran’s approach.

We continue to work with the Europeans for the Special Purpose Vehicle but we will not wait for them.

We are working with our traditional partners like India, China and Russia so that we continue to serve the interests of our people.

EU foreign policy head Federica Mogherini said last week that efforts to implement the SPV will continue, but Iran claims that the Europeans have missed two deadlines to bring the SPV into operation.

On Saturday, Foreign Ministry spokesman Bahram Qassemi said that the Islamic Republic “holds Europe definitely responsible for failing to implement the financial mechanism” and that the EU should account for the “consequences” of the delay.

Qassemi said the EU — including Germany, France and the UK, the three European parties in the 2015 nuclear deal with Iran — “are captive and hostage to the American economy”.

Where Now for Iran?

With the approach of comprehensive US sanctions last November, the Rouhani Government emphasized links with Europe as a key part of Iran’s economic resistance. In late September, Zarif and Mogherini agreed on the principle of the Special Purpose Vehicle.

However, Iran’s hardliners have pressed the Government over the tactics, with claims — including by the Supreme Leader — that the Europeans are not trustworthy.

Zarif’s statement, and the silence of Rouhani in recent days, is an apparent concession. However, the proclamation of India, China, and Russia as an alternative economic option is uncertain.

The US sanctions gave Iran a small window through waivers until May for Tehran’s top oil customers, including China and India — but only if they reduced purchases.

Despite Zarif’s optimistic declarations during his visit to New Delhi, including a speech at an international trade conference, India’s imports of Iranian oil have dropped 60%.

Deputy Oil Minister Amir Hossein Zamaninia admitted last week that Iran’s key markets will not buy “one additional barrel of oil” because of the US sanctions, although he vaguely spoke of new customers.

Tehran’s oil sales have fallen from 2.5 million barrels per day last April to 1.1 million bpd at the end of 2018. Non-oil exports dropped 57% in December.

The Parliament Research Center is projecting a recession by March of 2.6% to 5.5%, dependent on the level of decline in oil exports. The International Monetary Fund forecasts a GDP fall of 3.7% in 2019.

The Supreme National Security Council pointed to the burial of the European option on Monday.

Council Secretary Ali Shamkhani told an international conference in Tehran, “The Europeans’ opportunity to execute their commitments to our country under the JCPOA [2015 nuclear deal], and particularly the special financial channel, has ended.”

Shamkhani’s statement superseded the line of President Hassan Rouhani and Zarif that Iran was not “waiting for Europe”.

Second, Shamkhani’s position on the JCPOA matters because of the context of his relationship with Rouhani, and due to his position within Iranian decision-making. Effectively serving as national security adviser, Shamkhani was appointed

Of note, the SNSC votes on national security-related matters, with Khamenei holding a veto power that is only rarely executed. Given Parliament Speaker Ali Larijani’s presence on the SNSC and his close alignment with Rouhani during the negotiations leading up to the JCPOA, and also in his defense of engagement with Europe

Important day for European Foreign Policy! EU just agreed to enact sanctions against an Iranian Intelligence Service for its assassination plots on European soil. Strong signal from the EU that we will not accept such behavior in Europe.

An EU official said the EU Council added two Iranians and one entity to the terrorist listing, which authorizes asset freezes. Danish authorities named the men as the deputy minister of Iranian intelligence, Sayed Hashemi Moghaddam, and diplomat Assadollah Assadi.

Assadi, working for Iran’s Intelligence Ministry in Vienna, was arrested last summer and is in custody in Belgium over an alleged role in a bomb plot against a Paris rally of the National Council of Resistance of Iran.

French intelligence services said the plot was developed by Moghaddam.

The Danish Government has accused Iranian intelligence services of planning the assassination of a leader of the Iranian Ahwazi opposition.

And on Tuesday, the Dutch intelligence service said it has “strong indications” that Tehran is involved in the assassinations of two Dutch nationals of Iranian origin in 2015 and in 2017.

Two members of the Iranian embassy in The Hague were expelled last summer over the murders.