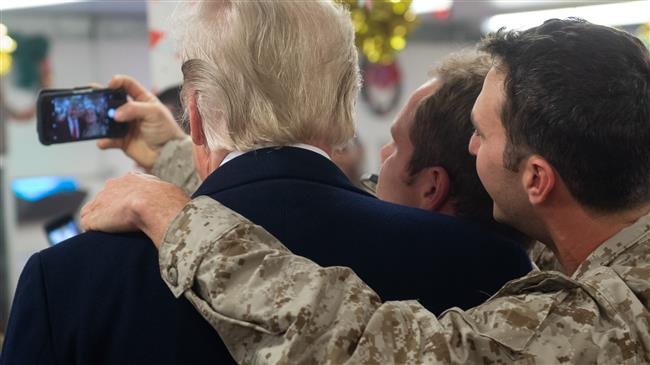 Donald Trump with US troops at the al-Asad airbase, Anbar Province, Iraq, December 26, 2018

Amid maneuvers for influence in Iraq, Iran’s President Hassan Rouhani has pronounced that Donald Trump’s visit to US troops in the country is a marker of American failure.

Trump made an unannounced trip to a US airbase in western Iraq on the day after Christmas, staying for three hours. There was no apparent consultation with Iraqi authorities, prompting an angry response from some Government members.

The event was more for domestic consumption, with Trump under pressure after the resignation of Defense Secretary Jim Mattis; however, Iran — still trying to maintain its regional presence despite facing US sanctions — quickly tried to frame it as American weakness in foreign and military policy and operations.

At a Cabinet meeting on Wednesday, Rouhani declared:

Since 2003, the Americans have been claiming that they have salvaged Iraq and Afghanistan; but if this claim is true, then why don’t you openly make an official trip to see how the Iraqis would welcome you on the streets of Baghdad and Basra?

The fact that you enter a small military base secretly and under the cover of the night, take pictures with a few soldiers, speak briefly, and leave Iraq a couple of hours later indicates your defeat.

The President told Trump that the secrecy meant that “you have not been successful, that you know the people of Iraq are not happy with you, and that you don’t dare to be among them”.

He added, “As for Syria, Lebanon, and Yemen, you don’t even dare to travel there!”

Despite countless interventions and thousands of billions of dollars the US has wasted on its illegitimate presence in the region and in particular in Iraq, Trump still has to visit a regional country in a total secret, or so to speak, sneaky way amid the tightest security measures.

The Scramble for Iraq

After months of uncertainty following national elections, Adil Abdul-Mahdi was named Prime Minister of a coalition government on October 2.

Iraqi Governments have been mired in criticism over corruption, mismanagement, and failure to deliver public services. Meanwhile, the US and Iran — both of whom were instrumental in the campaign to push back the Islamic State after their takeover of much of Iraq in 2014 — have been trying to maintain and project leading roles in Baghdad.

Hakim also said a foreign president will be travelling to Baghdad. He did not give a name, but Iraqi sources said it is French President Emmanuel Macron.