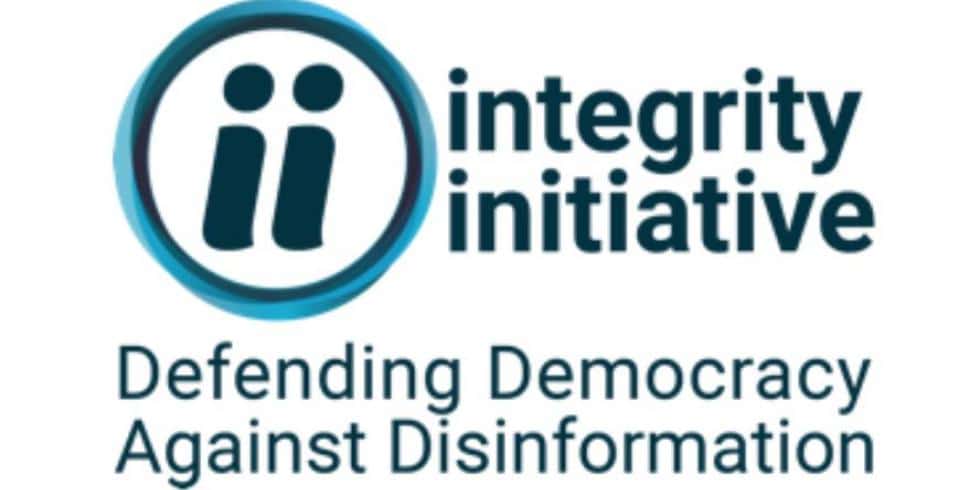 Did Moscow deflect from Russian disinformation by whipping up a story about a UK Government-supported public initiative?

This weekend the UK Government was accused of funding a shadowy disinformation campaign which involved launching political attacks on Twitter against the Labour Party and its leader Jeremy Corbyn.

In a news article published on Sunday, Scotland’s Sunday Mail newspaper said the UK Foreign Office had given £2.25 million to an organisation called the Integrity Initiative. The group was described as a “secret…Government-funded infowars unit based in Scotland” that was using social media to pillory the opposition.

Nearly 12 hours later, the Shadow Foreign Secretary Emily Thornberry repeated the claims. In a press release published on the Labour party’s website, she said it was “outrageous” that the group had “disseminated personal attacks and smears”.

MPs, journalists and commentators including Owen Jones and Andrew Neil declared the tweets were evidence of a “shadowy effort” that was “churning out propaganda” in an attempt to “undermine the Opposition”.

This isn't some weird conspiracy theory, it's real life, and it shows how power works in Britain. A government-funded so-called 'charity' run by military intelligence is churning out propaganda against Labour Party. https://t.co/fyh7t8yVdc

So how did Labour’s shadow foreign secretary end up making accusations of an “outrageous” and full-blown “infowars” plot? Well, it all started a few weeks ago with a computer hack….

According to its website, the charity is a network of “people and organisations from across Europe dedicated to revealing and combating propaganda and disinformation”.

“We are not a government body but we do work with government departments and agencies who share our aims.”

Articles on their website include: “Fabricated news article falsely claims child killed by NATO vehicles in Lithuania”, and “Yes, you can be poisoned with Novichok and survive”.

On November 5, someone purporting to represent Anonymous, the international hacker group, posted documents allegedly hacked from the Integrity Initiative on a site called CyberGuerilla.

It is not known who was behind the hack. At least one major Anonymous Twitter account distanced the group from the attack and instead blamed it on the Kremlin, accusing it of a “disinformation campaign against Western Democracies”.

The Integrity Initiative released a statement acknowledging the hack, saying it was a “matter of deep regret” that was “in breach of any defensible practice”.

In a statement issued on Monday, a spokesperson for the Foreign Office doubled down on the accusations against Russia, saying: “The Institute for Statecraft [Integrity Initiative’s parent organisation], an independent charity, was hacked several weeks ago and numerous documents were published and amplified by Kremlin news channels.

“The Russian state media campaign’s objective is clear. This is yet another example of Russian disinformation intended to confuse audiences and discredit an organisation which is working independently to tackle the threat of disinformation.”

Integrity Initiative confirmed to HuffPost UK it had reported the incident to the Information Commissioner’s Office and had made efforts to contact those whose data had been revealed.

The charity told HuffPost UK that most of the hacked documents posted on CyberGuerilla are genuine. The majority are lists of contact details for a number of journalists, think tanks, academics and diplomats which it groups by country and calls “clusters”.

Integrity Initiative said in a tweet the names represent people “we thought we might talk to” and were compiled “months ago”.

The document with the names of UK journalists and politicians being circulated by Kremlin media as the 'UK cluster' is a list we made months ago of people we thought we might talk to. We are not paying anyone to attack UK politicians.

One of the documents details how this was put into effect in Spain, where a Twitter campaign helped raise awareness of the pro-Russian views of a candidate for the post of director of the country’s Department of Homeland Security.

The documents, and the hack, went largely unnoticed until Russian-backed media reported the story towards the end of November.

RT, the most prominent Russian state-backed channel operating internationally, said the leak had exposed a “huge psyop” – a secretive government influence operation. Another state-backed site, Sputnik, declared the documents evidence of a “covert op” to “set up major EU warfare hub in Brussels”.

BREAKING: #Anonymous blows lid off huge psyop in Europe and it's funded by UK & US https://t.co/xlo5K0ckPP@foreignoffice @NATO @InitIntegrity pic.twitter.com/ukSAfE13lh

The reports prompted a response from the Integrity Initiative, which issued a statement confirming its funding from the Foreign & Commonwealth Office, the government department in charge of “promoting the UK’s interests abroad”.

It said: “This reflects their appreciation of the importance of the threat [posed by Russian disinformation campaigns], and a wish to support civil society programmes seeking to rebuild the ability of democratic societies to resist large scale, malicious disinformation and influence campaigns.”

The Russian-backed media reports were seized upon by a small group of UK academics, many of whom are members of the Working Group on Syria, Propaganda and the Media – a group which has expressed sympathetic views to the Kremlin and the Syrian regime.

Two of the professors who have been tweeting about Integrity Initiative, Tim Hayward and Piers Robinson, have previously been accused of spreading pro-Russian propaganda that “whitewashes war crimes”, and Robinson has been revealed to be supportive of 9/11 conspiracy theories.

The academics tweeted and retweeted those named in the hacked documents, asking if they could confirm they were part of the “UK cluster” to ascertain if this had affected their coverage of Russia and Syria. 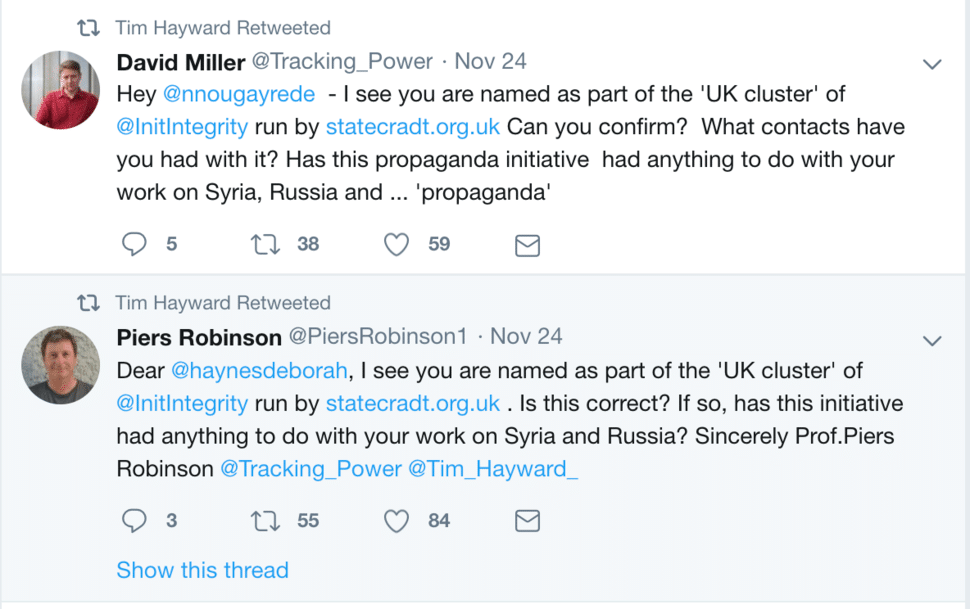 David Leask, chief reporter at The Herald newspaper, was one of those on the receiving end of the questioning.

Leask told HuffPost UK: “I have reported on issues of Russian propaganda for some years. In the course of that time I have retweeted [Integrity Initiative], I have quoted them and I once had a cheese sandwich with them.

“Is that involvement? I thought it was reporting.”

I don't see why one lot of people have to explain being on lists compiled by another lot of people. Private association is a cornerstone of a free society. Your informal cheerful tone is probably kindly meant, but it could be interpreted as intimidating or patronising.

As a result of taking an interest in the story, Professor David Miller of the University of Bristol, was invited on Russian-backed media channels to discuss the issue.

In an interview with Sputnik, which described Integrity Initiative as a “hybrid warfare plan of the British government”, Miller said: “The idea that campaigns like this are about countering Russian disinformation is in a way part of the disinformation of this kind of activity.

“When you see the kinds of activity they are engaged in, it is essentially promoting anti-Russian views and activities.”

And Labour MP Chris Williamson, a staunch supporter of Jeremy Corbyn, appeared on RT to announce he would be launching an inquiry into Integrity Initiative.

Aside from a few left-wing blogs, the story had not made headway in the British media until Sunday, when the Sunday Mail, the Scottish weekend sister paper of the Daily Mirror, ran an article headlined: “Secret Scottish-based office led infowars attack on Labour and Jeremy Corbyn.”

This article concentrated on a handful of tweets mentioning Labour and Jeremy Corbyn on the charity’s Twitter account. These included posting an opinion piece in the New Statesman accusing Labour of “parroting Putin and Assad’s propaganda over war crimes in Syria” and another highlighting a story about the boss of MI5 wanting to “prime Corbyn on the extent of hostile Russian espionage activity”.

Professor Scott Lucas of the University of Bristol, who runs a website monitoring disinformation, particularly from Russia, told HuffPost UK: ”[Integrity Initiative] crossed a line possibly by tweeting a couple of things about Corbyn and Seamus Milne but is that a hanging offence?”

Lucas suggested the initial hack had been deliberately seized upon by Russian media channels, saying: “In this case I wouldn’t call it disinformation.

“But It’s a classic influence operation because right now there’s an element of truth in what they’re reporting. This is a body funded by the FCO to disseminate information and that specifically, they tweeted against Corbyn. That’s true, they did.

The story was picked up by Emily Thornberry, who on Sunday evening released her statement demanding the government answer questions about the affair.

She said: “It is one of the cardinal rules of British public life that official resources should not be used for party political purposes.

“So, it is simply outrageous that the clearly mis-named ‘Integrity Initiative’ – funded by the Foreign Office to the tune of £2.25 million over the past two years – has routinely been using its Twitter feed to disseminate personal attacks and smears against the Leader of the Opposition, the Labour Party and Labour officials.”

Dalziel, spokesperson for the Integrity Initiative, told HuffPost UK that the Sunday Mail article was selective in the tweets it used.

He said: “One of the retweets which people seem to be quite upset about was from a time when 28 countries had come out in agreed Russia was behind the poisoning of Sergey Skripal and the leader of the Labour party still suggested he wanted more evidence to show that Russia was behind it.

“That’s now being interpreted as us attacking Jeremy Corbyn but that was never the intention.”

Dalziel also pointed out none of the Integrity Initiative tweets or retweets criticising the Tories were mentioned in the Sunday Mail.

He said: “We’ve also retweeted posts such as one questioning some of [Tory peer] Lord Barker’s activities with Russia.” [Barker is the chair of an energy company being investigated by US authorities for its links to Russian intelligence agencies].

“It’s certainly never been aimed at one party.”