Syria Daily: Assad — Give Me $400 Billion for Reconstruction 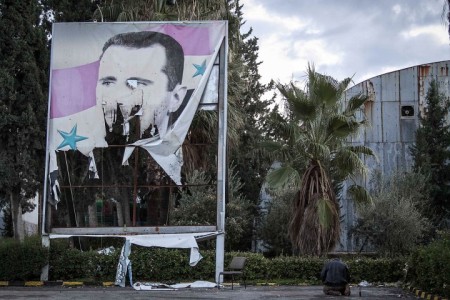 A torn poster of Bashar al-Assad in Aleppo, Syria (File)

Through his ally Russia, Syria’s leader Bashar al-Assad has appealed for up to $400 billion for reconstruction.

Assad sent his message through a meeting with Russia’s Deputy Prime Minister Yuri Borisov on Thursday, saying the cost of rebuilding the country after a 93-month conflict is from $250 billion to $450 billion.

Borisov’s office said, “The range of questions discussed with the Syrian leader included political affairs, Russia’s participation in Syria’s postwar reconstruction and restoration of life to normal, and cooperation in industry, medicine, energy and other branches of the economy.”

Neither Russia nor Iran, Assad’s other essential backer, are in a position to lead the reconstruction funding because of their own economic problems. The international community has balked at significant support, in part because of Assad’s insistence on staying in power and refusal of any political transition.

Borisov indicated that Assad could not rely on Russia, saying it is critical for Damascus to maximize the effectiveness of its planning by through “existing capacities” for financial and economic mechanisms.

He also issued a warning to the regime:

We’ve got to act fast, because any delays in economic recovery will be fraught with serious problems, including an upsurge in the activity of defeated terrorists. Extremists would find it far easier to recruit supporters from the class of impoverished people unable to support their families.

Assad fell back on platitudes:

These relations constitute a source of power for the peoples of the two friendly countries in the face of the policies of some western countries which are attempting to break the will of nations which refuse to bow to their diktats, whether through waging wars or slapping sanctions.

Moscow’s delegation was in Damascus for a meeting of the Russian-Syrian commission for trade, economic, scientific, and technical cooperation, with Borisov also meeting Prime Minister Imad Khamis.

The commission declared agreements that included switching to national currencies in mutual settlements and “commercial energy exploration” in Syria.

“Mutual settlements, transport and logistics — as far as I’m concerned these issues have been settled,” said Vladimir Padalko, Vice-President of the Russian Chamber of Commerce and Industry.