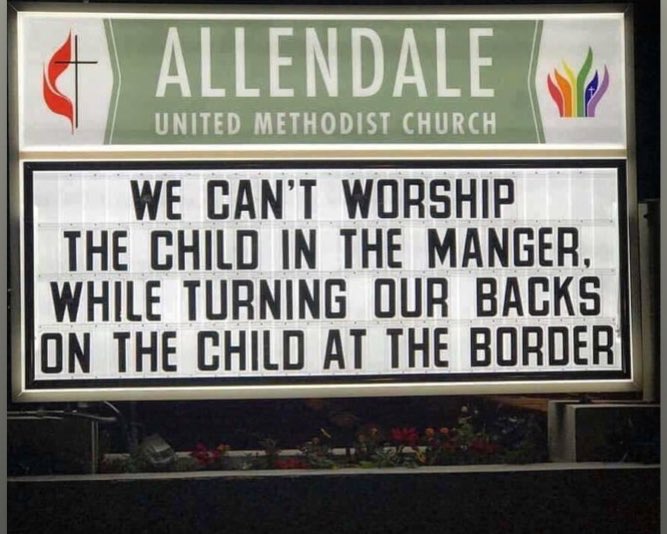 I spoke with BBC Radio Foyle on Thursday morning about the two deaths of migrant children in detention, and how they are linked to the Trump Administration’s “zero tolerance” policy.

An 8-year-old boy from Guatemala has died in US custody, the second death of a migrant child in detention in less than three weeks.

The boy died just after midnight on Tuesday at a hospital in Alamogordo, New Mexico, where he and his father were taken after a Border Patrol agent saw signs of illness.

It is unclear if the boy’s death on Tuesday was due to the journey from Central America, inadequate care in custody, or a combination.

He was taken to hospital on Monday and released with prescriptions for the antibiotic amoxicillin and ibuprofen, to relieve pain and reduce fever. During the night, he became nauseous and was taken by border authorities back to the hospital, where he died.

8 year old boy who died Christmas Eve in Border Patrol custody held with dad in the field for 3 hours.

Then 2 days at a BP processing station.

Then 2 days at another station.

That’s when CBP says he got sick. https://t.co/uPCP3DUs7b

“These facilities are no place for a child, even a well child,” said Marsha Griffin, a pediatrician on the Texas-Mexico border who is co-chairwoman of the American Academy of Pediatrics’s special interest group on immigrant health.

“The conditions in which these children are being held are truly shocking. It’s cold, and they are susceptible to influenza and dehydration,” she explained.

Kevin McAleenan, the commissioner of Customs and Border Protection, acknowledged in July that the facilities — which he compared to detention at a police station — “were not built to handle families and children”.

In May 2017, the American Academy of Pediatrics said complete medical histories and physical examinations of the migrants are not conducted: “Children should not be subjected to these facilities.”

A spokesman for Customs and Border Protection declared, “CBP strictly adheres to our national standards in regard to the conditions, including temperature control, at our temporary holding facilities.”

White House spokesman Hogan Gidley said the death of the 8-year-old boy was “very sad”. He said administration officials were seeking a clearer understanding of events from the Department of Homeland Security.

Just last week, @SecNielsen told me she would ensure DHS would "take good care of those in [their] care."

An 8-year-old boy just died on her watch.

There needs to be an investigation on CPB's short-term holding facilities. Children cannot be dying on our government's watch. pic.twitter.com/umCEHTWC54

Hundreds of Migrants Released Without Money or Food

More than 200 migrants were released by Immigration and Customs Enforcement at an El Paso, Texas bus station on Sunday night, many without money or food. Most did not speak English and had no means of communication.

Police brought in four buses to provide the migrants with temporary shelter from below-freezing temperatures.

Beto O’Rourke, a US Representative from El Paso, said more migrants were expected to be dropped off on Christmas Eve.

Hundreds of migrant families released onto the streets of El Paso on Christmas Eve, without food, money or help. ICE says more will be released tomorrow and following day. If you would like to help – please donate to migrant shelter Annunciation House: https://t.co/062olxpA6Z

ICE regularly processes asylum-seeking migrants, who have a court date, by outfitting them with an ankle bracelet before releasing them at the bus station. But Sunday’s group was unusually large and they were dropped off without warning, probably because of the shutdown of the Federal government.

El Pasoans helped last night and early this am after ICE left hundreds of migrants on the street in the dead of winter. But 200 or more on their way today and possibly another 200 tomorrow. The urgency right now is hotel rooms for the migrants. Pls donate https://t.co/iwsMasG632