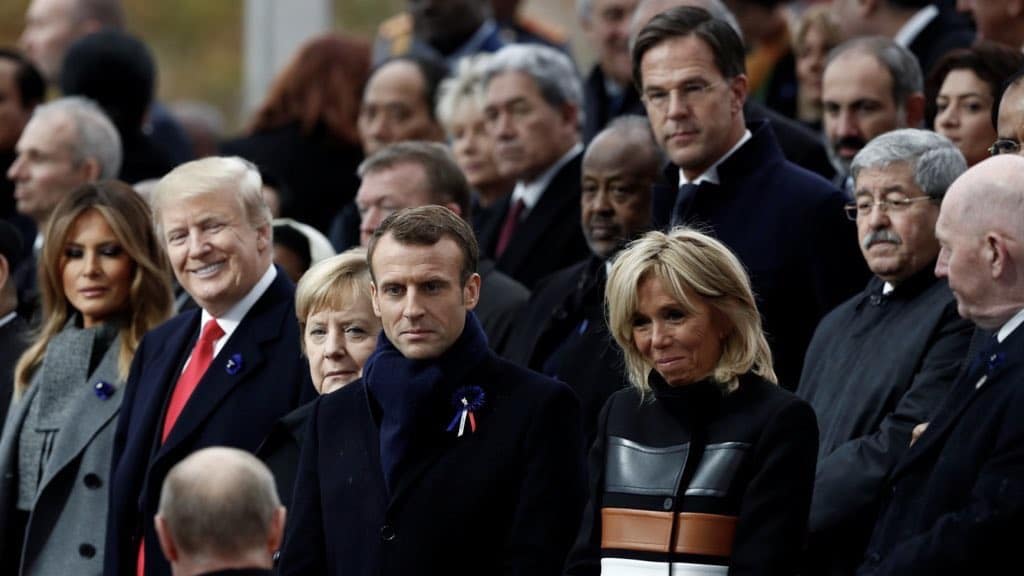 French President Emmanuel Macron has rebuked Donald Trump over the dangers of “nationalism”, during a speech marking the 100th anniversary of the end of World War I.

Speaking to dozens of global leaders at the Arc de Triomphe in central Paris, Macron said:

Patriotism is the exact opposite of nationalism. Nationalism is a betrayal of patriotism. By saying our interests first, who cares about the others, we erase what a nation holds dearest, what gives it life, what makes it great and what is essential: its moral values.

I know there are old demons which are coming back to the surface. They are ready to wreak chaos and death. History sometimes threatens to take its sinister course once again.

Trump built his 2016 campaign and then his Presidency on the promotion of an American “nationalism” and the rejeciton of shared interests with other countries, including long-standing US allies. As Macron spoke, Trump looked around with apparent disdain.

His discomfort during the rainy day evaporated only when he saw Vladimir Putin, with Trump beaming as the Russian President arrived and flashed him a thumbs-up.

The US President had spurred a weekend of tension around the international ceremonies. On the eve of the visit, he sniped at Macron over the proposal of a European defense force. A meeting with the French leader on Saturday passed without incident, but Trump then cancelled a visit to an American cemetery, with the White House claimed that light rain had grounded his helicopter.

Trump did reach another US cemetery on Sunday, after Macron’s speech. He said in a 10-minute address, “Each of these marble crosses and Stars of David marks the life of an American warrior — great, great warriors they are — who gave everything for family, country, God and freedom.”