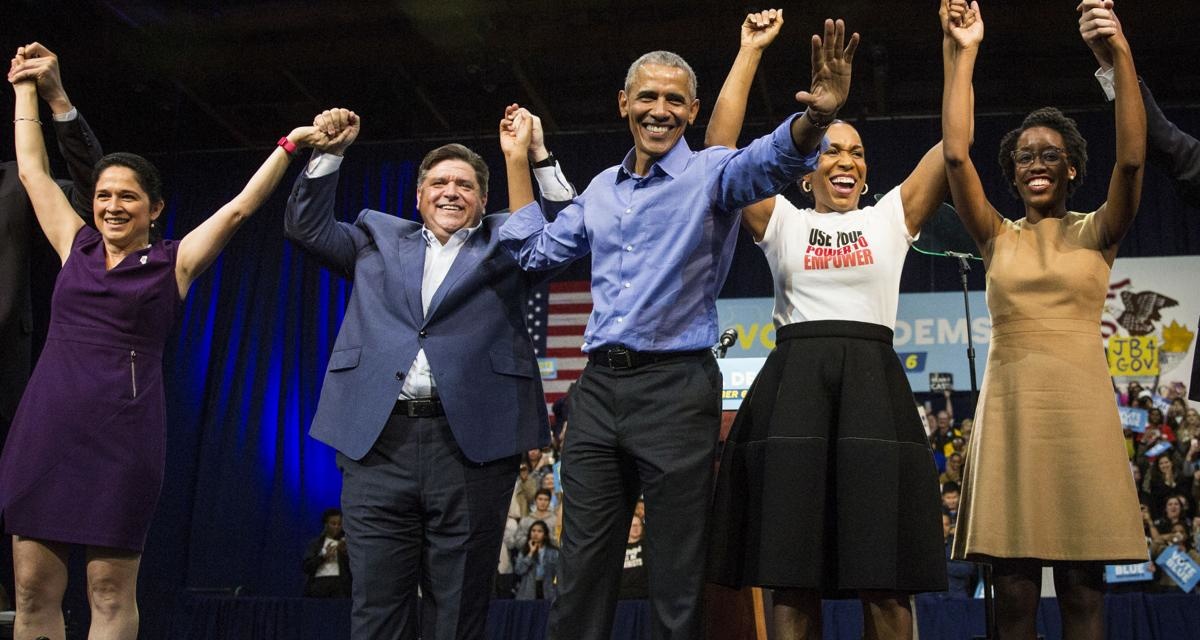 Former President Barack Obama at a rally in Indiana, November 4, 2018: “America is at a crossroads”

On the eve of Tuesday’s Congressional elections, Donald Trump steps up his attacks on immigrants, activists, and Democrats, including a series of divisive falsehoods.

In his latest rallies from Missouri to West Virginia, Trump has continued the assault on some immigrants as “the worst scum in the world”. He has portrayed Democrats as “antifa” (Anti-Fascist) demonstrators who have wear black uniforms and black helmets but have “this weak little face” and “go back home into mommy’s basement”. He then called on “Bikers for Trump”, the police, the military, Immigration and Customs Enforcement, and the Border Patrol to respond to Antifa and their “little arms”.

In Georgia on Sunday, he lied that the Democrat Stacey Abrams, seeking to become the state’s first African American governor — and facing the reported obstacle of voter suppression by her Republican opponent — take away the 2nd Amendment right to bear arms.

A Guide to Watching US Election Night

Trump’s latest statements follow a campaign tactic of demonizing immigrants, portraying a migrant caravan travelling from Central America through Mexico as an “invasion” — even though the caravan, moving on foot, has many women and children and is still five weeks from the US border — infiltrated by terrorists (“unknown Middle Easterners”). He has ordered 5,200 troops to the border, initially saying they can fire on anyone throwing a rock or stone, and has said he will end the right to asylum and birthright citizenship.

Despite his language possibly feeding recent attacks such as the Pittsburgh synagogue killings and the pipe bombs sent to prominent politicians, officials, and activists, Trump has persisted in portraying the caravan as funded by Jewish philanthropist George Soros and “Democrats”. He said on Saturday in Pennsylvania:

They want to invite caravan after caravan, and it is a little suspicious how those caravans are starting, isn’t it?. Isn’t it a little? And I think it’s a good thing maybe that they did it. Did they energize our base or what?

In his Sunday rally, Trump again lied that Democrats want to end health care for Americans, and that he has secured $4.8 billion for his Wall with Mexico. He concluded by saying that Democratic Governor candidate Abrams will turn the state into Venezuela, a country beset by serious economic problems.

Meanwhile, former President Barack Obama has continued his own journey on the campaign trail, calling for unity in response to Trump’s approach:

Barack Obama: "It's an old playbook. It's one that the powerful and the privileged turned to whenever control starts slipping away. They'll get folks riled up just to protect their power and their privilege. Even when it hurts the country." https://t.co/NILLbhk3rf pic.twitter.com/hWhqOwl3KH