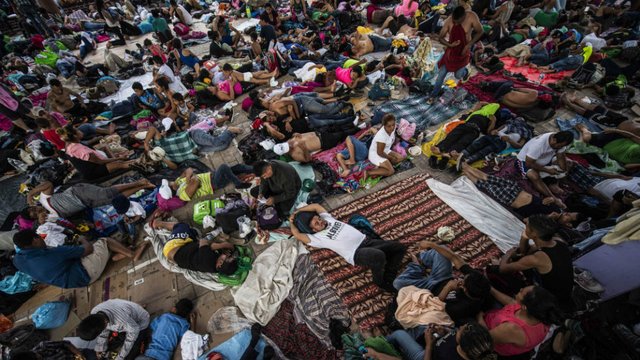 Migrants in a caravan travelling through Mexico, October 2018 (Getty)

In his anti-immigrant push before next Tuesday’s Congressional elections, Donald Trump says he will order 15,000 troops to the Mexico border to defend against an “invasion” by a caravan of 3,500 migrants — including women and children — who are six weeks away on foot.

Trump and key advisors like Stephen Miller have pursued the tactic of stigmatizing immigrants as a threat to America for months, accompanying the Administration’s “zero tolerance” policy, but Trump has stepped up the campaign — despite the possibility that it is feeding violence such as pipe bomb attacks and last Saturday’s Pittsburgh synagogue killings — in recent days.

EA on CNN: Trump’s Anti-Immigrant Tactics to Split America
EA in the Media: Trump and the Pittsburgh Synagogue Shootings

Earlier this week Trump said that he can remove birthright citizenship with an executive order, despite the likelihood that the step is unconstitutional. Yesterday he again implied — falsely — that Jewish philanthropist George Soros is backing the caravan.

REPORTER: Do think somebody is funding the caravan?

T: "I don't know who, but I wouldn't be surprised. A lot of people say yes." pic.twitter.com/U1w9EYHcw6

Trump added the threat that undocumented immigrants, including children, will be detained indefinitely: “We’ll build tent cities, whatever we have to build in terms of housing. We’re not doing releases.”

In a rally in Florida on Wednesday night, Trump included lies about immigrants amid a series of false statements:

A Bigger Force Than Afghanistan

But it is the deployment of the US army which has grabbed headlines. The Defense Department started the week with the announcement that 5,200 active-duty troops are being sent to the border. The estimated initial cost is $50 million.

They are joining 2,100 National Guardsmen on duty at the frontier.

On Wednesday Trump raised the number of troops to 15,000 — a figure greater than the US deployment in Afghanistan since 2015 — even though the caravan is more than 800 miles from the US, a six-week journey by foot.

“As far as the caravan is concerned. our military is out, we have about 5,000-8 (thousand), we’ll go up to anywhere between 10 (thousand) and 15,000 military personnel on top of border patrol, ICE [Immigration and Customs Enforcement, and everybody else on the border,” Trump told reporters.

Our military is being mobilized at the Southern Border. Many more troops coming. We will NOT let these Caravans, which are also made up of some very bad thugs and gang members, into the U.S. Our Border is sacred, must come in legally. TURN AROUND!

In another tweet, he lied that the caravan “fought back hard and viciously” against the Mexican army, injuring soldiers.

The Pentagon, apparently caught off guard by the 15,000 figure, released a statement: “The number of troops deployed will change each day as military forces flow into the operating area, but the initial estimate is that the DOD [Department of Defense] will have more than 7,000 troops supporting DHS [Department of Homeland Security] across California, Arizona, and Texas.”

Trump repeated his threat to end foreign assistance to El Salvador, Honduras, and Guatemala: “We are thinking very seriously, immediately stopping aid to those countries because frankly, they’re doing nothing for the American people.”

A Fight with Paul Ryan

Trump’s aggressive stance brought an unexpected complication when House Speaker Paul Ryan, who is retiring this year, pushed back against the declaration of an end to birthright citizenship.

Ryan told a Kentucky radio station that “you cannot end birthright citizenship with an executive order”.

Trump had insisted to an interviewer, “You can definitely do it with an Act of Congress. But now they’re saying I can do it just with an executive order.”

He derided Ryan as ignorant yesterday:

Paul Ryan should be focusing on holding the Majority rather than giving his opinions on Birthright Citizenship, something he knows nothing about! Our new Republican Majority will work on this, Closing the Immigration Loopholes and Securing our Border!

A “senior GOP aide” responded that Trump was undermining the Republican campaign: “This is a great way to screw up the message a week before the election. First the birthright comment itself and now attacking the top Republican in Congress who is trying to save our majority.”