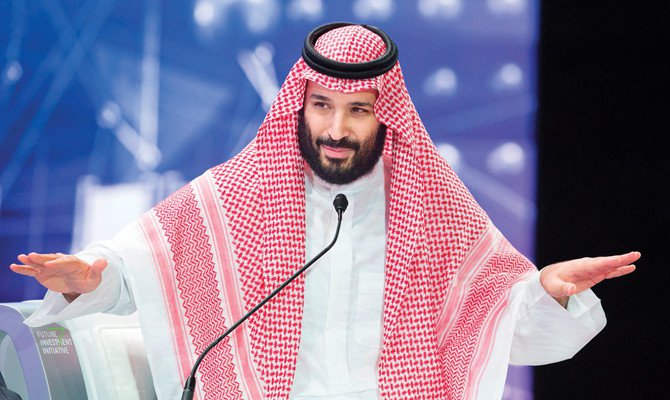 Areeb Ullah and Chloé Benoist write for Middle East Eye, with a contribution from EA:

Saudi Crown Prince Mohammed bin Salman broke his silence on the killing of Saudi journalist Jamal Khashoggi on Wednesday, calling his death “a heinous crime” – while hitting back against critics and taking a defiant stance against rumours that he might be pushed aside over the case.

“The crime was really painful to all Saudis and I believe it is painful to every human in the world,” said bin Salman, who spoke at the Future Investment Initiative (FII) forum – also nicknamed ‘Davos in the Desert’.

“It is a heinous crime that cannot be justified.”

The Crown Prince said Saudi Arabia was working with Turkish authorities on the case.

“Undoubtedly, the cooperation today between the Saudi and Turkish governments is unique and we know that many are trying to use this painful thing to drive a wedge between Saudi Arabia and Turkey,” he said.

To applause from the crowd, he continued: “I want to send them a message: They will not be able to do that as long as there is a king called King Salman bin Abdelaziz and a crown prince called Mohammed bin Salman in Saudi Arabia and a President in Turkey called Erdoğan.”

Bin Salman’s statement came just after a Turkish presidential source revealed that the crown prince had spoken with Turkish President Recep Tayyip Erdogan on Wednesday to discuss the ongoing investigation into Khashoggi’s death, marking the first time the two have spoken since the beginning of the crisis.

They have continued to deny that the Saudi leadership is involved and pushed responsibility down the chain of command.

The Saudi explanation has been widely questioned, most lately on Tuesday by US President Donald Trump, who described the handling of Khashoggi’s killing as the “worst cover-up ever”.

The role of the 33-year-old, often referred to as MBS, in the murder of Khashoggi has been under heavy scrutiny, particularly as reports have emerged that Saoud al-Qahtani, a close adviser to the crown prince, directed the killing and was beamed into the Saudi consulate via Skype, hurling insults at the journalist before he was killed.

In the past, Qahtani has said he would never do anything without MBS’s approval. Furthermore, at least seven of the Saudis suspected of involvement in Khashoggi’s death belonged to bin Salman’s personal security and protection detail, Middle East Eye revealed last week.

For David Wearing, a lecturer at Royal Holloway University in London, bin Salman’s denunciation of Khashoggi’s killing was a possible sign that the crown prince was “worried”.

Wearing went on to dismiss bin Salman’s allegations that Khashoggi’s case was being used by unnamed individuals to affect Saudi-Turkish relations.

“The wedge exists in part because the Saudis and Emiratis have taken such a strong line against the Muslim Brotherhood,” he said. “Because they have been so paranoid and aggressive about that, it’s created a rift, because Turkey is bound to be on the other side of that rift.”

According to Scott Lucas, an expert on international relations at the University of Birmingham in Britain, “the ball is in Turkey’s court” with regards to the investigation.

“Developments like the Saudis refusing inspection of the well in the consulate’s residency will escalate the situation,” he told Middle East Eye.

In the wake of Khashoggi’s death, many foreign officials, executives and business people pulled out of the FII conference, where bin Salman spoke on Wednesday afternoon alongside Lebanese Prime Minister Saad Hariri and Bahraini Crown Prince Salman bin Hamad.

Following his brief comments about Khashoggi, the crown prince’s PR-infused comments at the investment event are likely to be seen as an attempt to quieten calls for him to step down from his position as second-in-line to the Saudi throne.

Under his watch in the next 30 years, the crown prince told the audience, the Middle East will be “like Europe” and there will be “a war” for a Middle East renaissance.

“Your royal highness, don’t worry, we have $50bn since yesterday,” MBS responded, alluding to deals purportedly reached since the conference began on Tuesday.

Wearing seemed dubious that Saudi attempts to highlight its financial credentials would overcome the crisis in its public image caused by the Khashoggi case.

“There are attractive aspects to Saudi Arabia – all the money they have and their strategic position in the region – but fundamentally they need the West more than the West needs them,” he said. “They’re an attractive market, but are people willing to take the reputational cost of being associated to the crown prince, who’s widely seen internationally as a murderer? And are people willing to do business in a country that’s so badly run?”

On the heels of his condemnation of Khashoggi’s death, the crown prince notably mentioned planned reforms to Saudi Arabia’s security apparatus – the restructuring of which he himself has been tasked with.

“Saudi Arabia has taken very huge steps in developing the Saudi economy in the past three years and in restructuring many institutions and sectors,” he said at the conference. “Today it is time to restructure national security institutions in Saudi Arabia [to be] equal to the other institutions that have been upgraded and developed.”

At the conclusion of the FII talk, bin Salman jokingly referred to the alleged abduction of Hariri by the Saudi government last year.

“I just want to conclude with one thing – Prime Minister Saad is going to be here for two days, so please, no rumours that he has been kidnapped,” he said, in front of the laughing Lebanese premier.

According to analysts, Bin Salman’s defiant statement about his father King Salman and himself staying in power confirms that, despite the pressure, the Khashoggi case would likely not lead to the crown prince being sidelined.

“It comes down to the family and prominent businessmen affiliated to MBS, ie can the crown prince deliver Vision 2030?” Lucas told MEE. “The Khashoggi affair can disappear. But the longer this stays open, the longer the uncertainty.”

“There isn’t enough of an internal challenge inside the monarchy or the Arab world. Most rulers, like [Egyptian President Abdel Fattah] Sisi, the Jordanian King, and Hariri, have backed him,” Lucas told MEE.

“The successive waves of arrests since MBS was appointed are an expression of a state structure that facilitates this kind of behaviour,” he told MEE. “The ‘royal’ family need to decide whether the catalogue of flagrant human rights violations is the kind of reputation they want associated with the family.

“This is about a certain morality; a respect for basic human dignity. King Salman and other members of the family must ask themselves whether they are ‘for’ respecting basic human dignity or not. If so, a change of course is needed urgently,” Dyke added.

“Saudi Arabia must recuse itself from its membership of the UN Human Rights Council and sign up to international human rights treaties. Otherwise, talk is cheap.”

Lucas said that Khashoggi’s murder was nonetheless an unexpected source of pressure on the young crown prince rather than the war in Yemen as the cause of MBS’s downfall.

“A lot of people in the US and Turkish media may not know any Yemeni citizens, but knew Khashoggi personally. This says a lot about how the world works.”

Wearing took issue with bin Salman’s off-colour joke about Hariri, and tied it to the controversial meeting on Tuesday between King Salman, MBS, and Khashoggi’s son.

“What MBS doesn’t realise is, to outside audiences, not just in the West, but in the Middle East and internationally, people will look at that and think that’s just sinister,” he said. “The Saudis obviously thought that would show them in a good light. But it was absolutely macabre… It makes them really look sinister and cruel and it’s a sign of their total lack of judgement.”

Meanwhile, Wearing said the Khashoggi case could raise questions about the broader future of Saudi leadership.

“What’s happened with Khashoggi implicates the Crown Prince, and the whole scandal has crystalized a general disquiet about how he behaves,” Wearing said.

“When problems are so tied to one man you’d normally expect that person to be removed,” he added. “The difficulty here is that not only is he the son of the king, but he’s also clearly the king’s favorite son…If the king is not willing to get rid of him, then they both have to be gotten rid of.

“And the question that arises then is who does that, are they capable of doing it and are they willing to do it? And I don’t think we know the answers to those questions.”