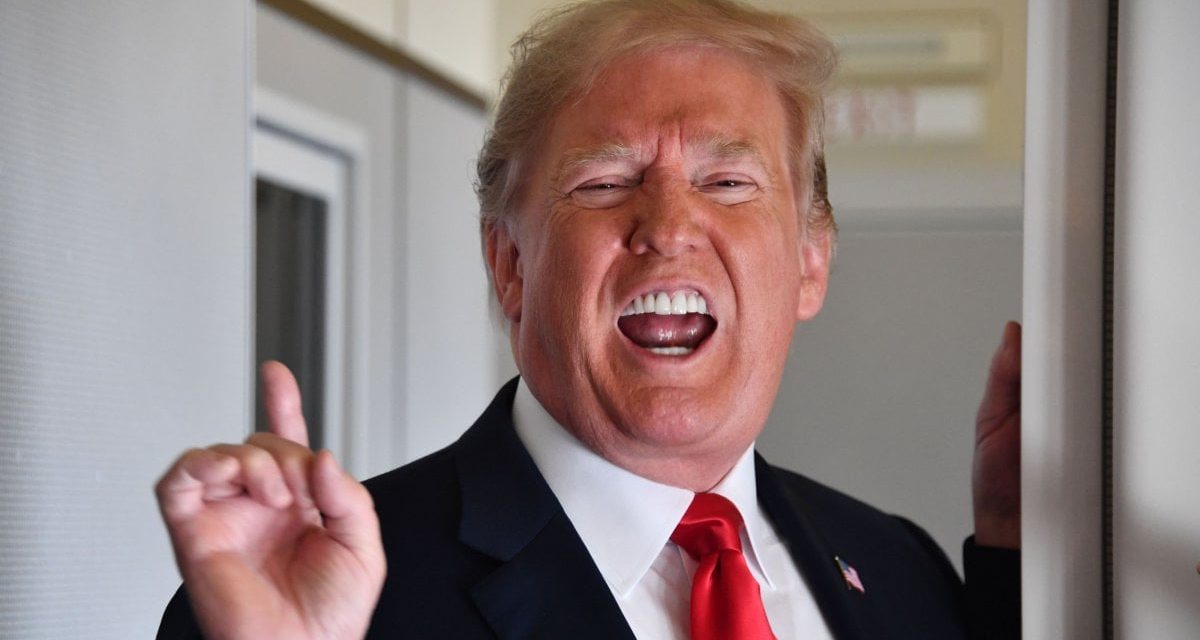 Quickly discarding a script of “unity” after last week’s pipe bomb attacks on leading public figures and Saturday’s mass killing in a Pittsburgh synagogue, Donald Trump insults one of the targets of the bombs.

While sometimes saying he would check his public remarks, Trump has continued to blame the media’s “hostility” and “fake news” for the attacks and to mock opponents — including targets Hillary Clinton and Representative Maxine Waters — in appearances at rallies.

On Sunday, he could not contain after watching leading Democrat donor Tom Steyer on CNN:

Just watched Wacky Tom Steyer, who I have not seen in action before, be interviewed by @jaketapper. He comes off as a crazed & stumbling lunatic who should be running out of money pretty soon. As bad as their field is, if he is running for President, the Dems will eat him alive!

The Fake News is doing everything in their power to blame Republicans, Conservatives and me for the division and hatred that has been going on for so long in our Country. Actually, it is their Fake & Dishonest reporting which is causing problems far greater than they understand!

In the afternoon, Trump again aimed at the media, trying to portray himself as the victim:

The Fake News is doing everything in their power to blame Republicans, Conservatives and me for the division and hatred that has been going on for so long in our Country. Actually, it is their Fake & Dishonest reporting which is causing problems far greater than they understand!

Throughout Sunday, the White House and leading Republican tried to absolve Trump — and themselves — of any responsibility over their language, which has included the portrayal of would-be immigrants as a threat to the US, has accused the Jewish billionaire George Soros of being a “globalist” funding the threat, and has portrayed Democrats whipping up “mobs” within the US.

The accused pipe bomber, Cesar Sayoc, featured some of the messages in his posts and including — alongside tributes to Trump — pictures of Democrats, activists, media figures, and Green Party leader Jill Stein with targets on their faces. Robert Bowers, charged with Saturday’s killings in the Pittsburgh synagogue, cited Jewish support of refugees and immigrants as the motive for his attack. And in Kentucky, two African Americans were killed by a man after he could not barge his way into a church.

But on Sunday, John Cornyn, the No. 2 Republican in the Senate, persisted with the GOP tactics as he referred to the confirmation hearings for Supreme Court Justice Brett M. Kavanaugh, accused by three women of sexual assault:

You could say Ds on defensive after encouraging the mob scene at the Kavanaugh hearings, and Booker, Waters, Holder, Clinton comments. No one should encourage violence. No one. Quit blaming only those you disagree with. Your bias is showing. https://t.co/NkF1iZQxPW

Cornyn also put out a distorted tweet implying that the Democrat leader in the House, Nancy Pelosi, had said “collateral damage” was acceptable for the sake of political gain.

In fact, Pelosi was speaking about the need for policies to combat climate change, not about the past week’s attacks.

In an interview on Saturday night, Vice President Mike Pence played down any issue about Trump’s rhetoric:

Everyone has their own style. Frankly, people on both sides of the aisle use strong language about our political differences. But I just don’t think you can connect it to threats or acts of violence.

I don’t see any connection where you would connect the president to this particular shooting, just like I wouldn’t see that connecting Democrats when a person walked up to a baseball game last year in Washington, D.C., and said, “Is this where the Republicans are practicing?” and then opened fire on them simply because they were Republicans.