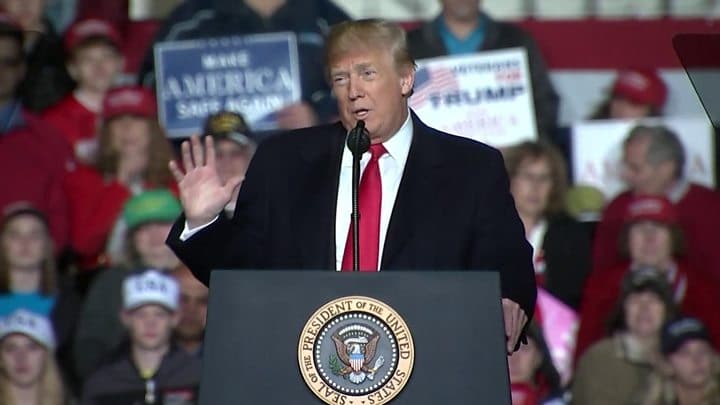 Donald Trump speaks at a rally in Wisconsin, October 24, 2018

The targets of the pipe bombs, none of which detonated, were all hate figures for some hard-right political activists. The explosive sent to CNN was addressed to Obama’s CIA Director John Brennan, a critic of Donald Trump. Packages were also delivered to Obama’s former Attorney General Eric Holder, former Democratic National Committee chair Debbie Wasserman Schultz, and Representative Maxine Waters, whom Trump has often derided as “crazy” and “low IQ”.

Trump has proclaimed journalists to be “enemies of the people” and implied during the 2016 campaign that gun owners could take action against Clinton. Last week he loudly cheered a Republican Congressman who body-slammed a reporter in 2017.

But he assumed no blame for corrosive language that might have encouraged violence. Instead, he put the onus on the media: “[It] has a responsibility to set a civil tone and stop the endless hostility and constant negative and oftentimes false attacks.”

He also — without any apparent recognition of his trademark insults of opponents over their intelligence, stability, and physical characteristics — said politicians should “stop treating their opponents as morally defective”.

Earlier in the day Trump emphasized the investigation to find those who despatched the bombs and said, “In these times we have to unify…and send one very clear, strong, unmistakable message that acts or threats of political violence of any kind have no place in the United States of America.”

During the evening rally in Wisconsin, Trump praised himself for “how nice I’m behaving tonight”. But he then aimed at the media.

CNN’s New York studio had to interrupt its broadcast as the alarm sounded over the bomb. The outlet later responded:

They said Trump had “divided Americans with his words and actions”, including his “body slam” support of Montana Representative Greg Gianforte; his failure to challenge a violent white supremacist rally in August 2017 in Charlottesville, Virginia; his encouragement of supporters at rallies who accosted protesters; his praise for foreign dictators who kill their citizens; and his attacks on the free press as “the enemy of the people”.