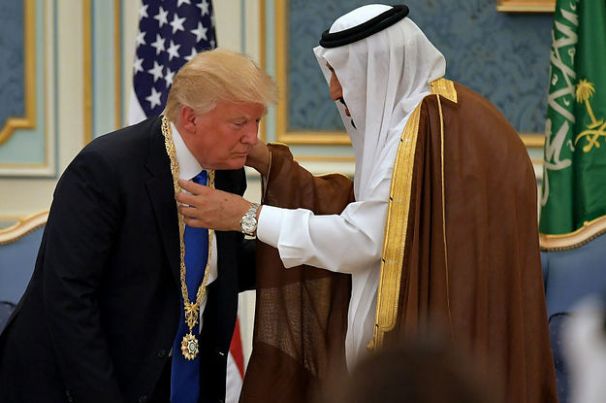 Donald Trump backs the Saudi monarchy — and undercuts the line of his Administration — with remarks that “rogue killers” may be responsible for the disappearance of journalist Jamal Khashoggi.

Khashoggi never reappeared after entering the Saudi Consulate in Istanbul, Turkey on October 2 seeking documents for his marriage to fiancée Hatice Cengiz. Turkish officials said they have audio and video evidence that the journalist, who wrote for outlets like The Washington Post, was killed. US intelligence services claim evidence of Saudi officials discussing plans to abduct Khashoggi.

After initial silence over the matter, Trump indicated last week that he would not support US action against Riyadh. He noted that Khashoggi is a permanent US resident rather than an American citizen, and said the US could not allow countries like Russia and China to cover an $110 billion arms sale to Saudi Arabia that he announced last year.

Over the weekend, Trump adopted a firmer line of “severe punishment” if the Saudis were found to be responsible. But, after a 20-minute phone call with King Salman on Monday, he offered absolution:

It wasn’t like there was a question in his mind. The denial was very strong….The king firmly denied any knowledge of it.

He didn’t really know — maybe — I don’t want to get into his mind but it sounded to me like maybe these could have been rogue killers, who knows.

Unnamed sources later told media outlets that Riyadh is preparing to acknowledge that Khashoggi was killed during an “interrogation” before he was forcibly returned to Saudi Arabia.

It was unclear if the statement contradicted Trump’s assertion, or if he was rephrasing a Saudi line that an out-of-control official was responsible for killing Khashoggi. One source said the Saudi report will likely conclude that the operation was carried out without clearance from superiors.

A team of 15 Saudis, including a doctor, entered the Consulate on the day of Khashoggi’s disappearance.

On Monday, Turkish officials were finally allowed to inspect the premises, but only after a cleaning team entered the building earlier in the day.

VIDEO: A team of Turkish police investigators and prosecutors leaves the Saudi consulate in Istanbul after conducting an eight-hour night-time search pic.twitter.com/EiOQKr9NVD