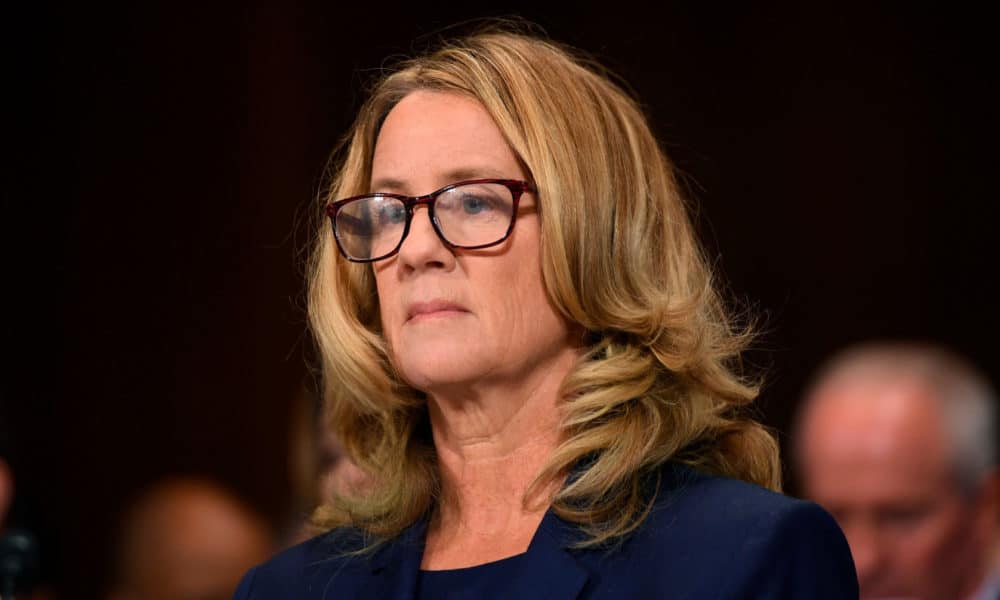 Defying the powerful testimony of Professor Christine Blasey Ford — and trying to dismiss the sexual assault allegations of two other women — Republican Senators are trying to ram through the confirmation of Supreme Court nominee Brett Kavanaugh.

Soon after Ford and Kavanugh appeared before the Senate Judiciary Committee, the GOP leadership scheduled a committee vote for Friday.

Ford — who started by saying, “I am terrified” — gave a composed, graphic account of the alleged attempted rape by Kavanaugh at a small party in summer 1982. Audience members and a Democrat committee member wiped away tears as Ford, both in her statement and under questioning by the prosecutor brought in by Republicans, explained that she was “100%” certain that Kavanaugh attacked her and that the assault has caused ongoing post-traumatic stress disorder.

In contrast to Ford’s emotive but calm presentative, Kavanaugh was combative from the outset, portraying himself and his family as the victims. He alternated between near-shouting and a demeanor appearing to struggle with his own tears, refraining from a direct challenge to Ford but assailing Democrats and the media.

At times, Kavanaugh locked in verbal combat with Democratic members. He was particularly unsettled by questions about his drinking and its aftermath during high school and university. He insisted that while he had “fallen asleep” from “beers”, he had never suffered a lapse of memory. He tried to turn the tables on Senator Amy Klebuchar when she asked if he had ever passed out, “No. Have you?” Klebuchar explained that, as the daughter of an alcoholic, she knew the necessity of maintaining control.

Kavanaugh also risked deception in explanations about references in his yearbook to drinking and sexual activity. And he was stymied at times by Democrat calls for him to request an FBI investigation, a step blocked by commitee Republicans and the White House.

GOP senators changed their tactics to cover for the nominee. They sidelined their prosecutor, Rachel Mitchell, about 1/3 of the way through questioning of Kavanaugh. When the judge floundered — at one point in extended silence — over the issue of the FBI investigation, Trump ally Lindsey Graham intervened with a loud proclamation of the “most unethical sham” he had witnessed in decades in the Senate.

Republican colleagues such as former Presidential candidate Ted Cruz followed by building up a conspiracy theory by Democrats — Kavanaugh included “the Clintons” — and comparing it to McCarthyism. Distorting the chain of events, they accused ranking Democrat Nancy Feinstein of hiding Ford from an investigation — by the committee or by the FBI — for more than six weeks.

The outcome was far from assured, both over Kavanaugh and in mid-term Congressional elections on November 6. But the GOP leadership, soon after the hearing, scheduled a committee vote on Friday and a procedural vote in the Senate on Saturday.

Meanwhile, Donald Trump — who reportedly wobbled after hearing Ford’s testimony, surprised that she was so effective — gave his endorsement via Twitter:

Judge Kavanaugh showed America exactly why I nominated him. His testimony was powerful, honest, and riveting. Democrats’ search and destroy strategy is disgraceful and this process has been a total sham and effort to delay, obstruct, and resist. The Senate must vote!

The immediate course of events rests on three GOP Senators: committee member Jeff Flake of Arizona, Lisa Murkowski of Alaska, and Susan Collins of Maine. All have been critical of Trump in the past, and Murkowski has called for an FBI investigation before any vote on Kavanaugh.

Flake was non-committal in his brief committee statement on Thursday, but the three GOP senators were meeting Democratic colleague Joe Manchin of West Virginia — considered the most likely Democrat to vote for the nominee — last night.