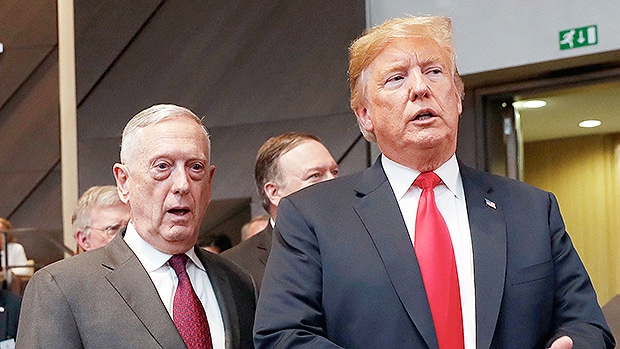 Donald Trump is hit by the shock of a new book detailing his out-of-control Presidency heading towards a “nervous breakdown”.

Extracts from Fear — the work of Bob Woodward, the veteran journalist who helped break the story of Watergate and has written about eight Presidents from Nixon to Trump — raced across the media on Tuesday, with vivid portraits from Trump’s advisors of a disfunctional Administration and a tempermental, ill-informed President.

Woodward’s book is based on taped interviews with multiple sources close to Trump. The author was unable to get an appointment with the President; however, after completion of the manuscript, Trump called and said he regretted that Woodward had not spoken with him. The journalist then appeared to catch Trump in a possible lie that he had not been told of the requests for an interview.

He’s an idiot. It’s pointless to try to convince him of anything. He’s gone off the rails. We’re in Crazytown. I don’t even know why any of us are here. This is the worst job I’ve ever had.

Among those carrying out theft to prevent abrupt Trump action was former White House chief economic adviser Gary Cohn, who departed early this year after losing a battle over sweeping US tariffs against China and allies like Canada and the European Union.

“I can stop this. I’ll just take the paper off his desk,” Cohn told aides.

Cohn had come to regard Trump as a “professional liar” and contemplated resigning in August 2017 after Trump excused violence by white supremacists in Charlottesville, Virginia.

“This is treason,” Trump reportedly told Cohn when he tried to deliver his resignation letter. According to Woodward, Kelly said he would have “taken that resignation letter and shoved it up [Trump’s] ass six different times”.

In a January 2018 meeting, Trump’s lawyers held a practice session with Trump for a potential interview with Special Counsel Mueller in the Trump-Russia investigation. After reenacting the session with Mueller and his deputy, Trump’s lawyer John Dowd told the President, “Don’t testify. It’s either that or an orange jumpsuit.”

After initial shock and the lack of an official response, close advisors described in the book spent Wednesday denying their quoted words. Defense Secretary Jim Mattis said the book is “fiction…the product of someone’s rich imagination”. Press Secretary Sarah Huckabee derided it as “nothing more than fabricated stories, many by former disgruntled employees”.

The White House also recycled a denial from Kelly in the spring of his description of “idiot” Trump, in which the Chief of Staff said the claim is “total BS” and he and Trump have “an incredibly candid and strong relationship”.

Former Trump lawyer Dowd rejected the account of the problematic practice session with his client.

Trump broke his silence on Wednesday night, referring to a depiction of him and the Attorney General whom he regularly insults and threatens to dismiss:

The already discredited Woodward book, so many lies and phony sources, has me calling Jeff Sessions “mentally retarded” and “a dumb southerner.” I said NEITHER, never used those terms on anyone, including Jeff, and being a southerner is a GREAT thing. He made this up to divide!

Trump then tweeted about two articles with Mattis’s “fiction” remark.

But other advisors immediately undercut the denials by speaking of a “paranoid” Trump as he learned on Tuesday of the forthcoming book.

One source said Trump was already agitated by a book by former White House advisor Omarosa Manigault Newman, describing Trump as a racist, and believes he has been betrayed by aides and confidants over the Trump-Russia investigation.

“He doesn’t think he can trust anybody,” the advisor said.

Trump urged senior White House staff and Cabinet members to speak out and deny their quotes in the book, and he expressed frustration with

Trump is also frustrated with White House counselor Kellyanne Conway, claiming that she did not tell him of Woodward’s approaches for an interview, said a “senior White House official”.

Another White House official said the usual tactic over critical portrayals is to discredit the author — pursued over Michael Wolff’s “Fire and Fury” and Manigault Newman’s “Unhinged”. But the official noted that this is unlikely to work with Woodward, given his career of more than 40 years with multiple Pulitzer Prizes as well as Watergate fame.

Conway told others in the White House that Woodward is credible.

Other current and former White House aides said the book rings true, even if they are not sure of every detail. “I’m not sure why everyone is acting so shocked,” one “former senior administration official” said.

I've been on the receiving end of a Bob Woodward book. There were quotes in it I didn't like. But never once – never – did I think Woodward made it up. Anonymous sources have looser lips and may take liberties. But Woodward always plays is straight. Someone told it to him.