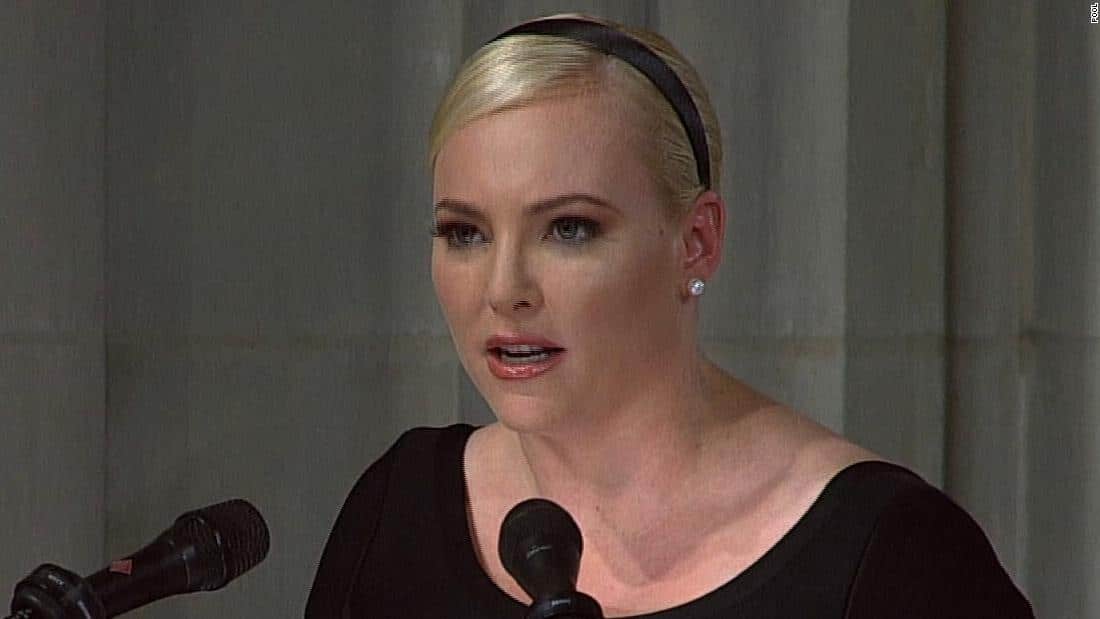 Memorial services for John McCain offer a contrast to the politics and behavior of Donald Trump, who spends the day tweeting angrily and playing golf.

Former Presidents Barack Obama and George W. Bush were among those at the Washington National Cathedral offering tributes to McCain, the decorated veteran, long-time US Senator, and Presidential candidate who died August 25 from brain cancer.

However, the sharpest words came from McCain’s daughter Meghan, in a riposte to Trump’s “Make America Great Again” politics: “The America of John McCain has no need to be made great again because America was always great.” She continued, with the implicit contrast of Trump — who avoided military service in the Vietnam War because of supposed “bone spurs” in his feet — and her father’s 5 1/2 years as a prisoner of war in North Vietnam:

We mourn the passing of American greatness, the real thing. Not the cheap rhetoric from men who will never come near the sacrifice he gave so willingly, nor the opportunistic appropriation of those who lived lives of comfort and privilege.

In his final months, John McCain discussed the eulogy with Meghan, “Show them how tough you are.” She said on Saturday pushing back on Trump’s anti-immigration position and his loud statements at rallies and on Twitter:

The America of John McCain is generous and welcoming and bold. She’s resourceful, confident, secure. She meets her responsibilities. She speaks quietly because she’s strong.

As she challenged Trump’s “Make America Great Again” slogan, her mother Cindy and brother Jimmy were among those applauding. Afterwards, Joseph Lieberman — the long-time Democrat and then independent Congressman who almost became John McCain’s Vice-Presidential running mate in 2008 — said@

It was a great tribute to John. I hope somebody’s listening in the White House. You can always be greater, but this country is great.

Trump, who repeatedly insulted McCain and failed to acknowledge his death, was not invited to the service. His daughter Ivanka and son-in-law Jared Kushner, who were present, showed no reaction to Meghan McCain’s words.

Obama and Bush also presented McCain’s life as an alternative to division and abuse.

Obama said McCain had called on America to be better and bigger than a “politics that pretends to be brave and tough but in fact is borne in fear”: “What makes our country is great is that our membership is not based on our bloodline… [but] on adherence to a common creed. That all of us are created equal.”

Bush described McCain as a man with a code of values — someone who always recognized that his political opponents were still “patriots.” He said McCain did not tolerate “bigots and swaggering despots” or leaders who acted like bullies.

“America is better than this,” Bush summarized.

Trump faced an unusual day in which he was shut out of headlines by the coverage given to McCain’s memorial, even by Trump ally Fox TV.

He responded with tweets pushing his ongoing assault of the media and his attempt to undermine the Trump-Russia investigation. But his loudest blast was against a new foe — Canada, for not surrendering to Trump’s attempt to revise the North American Free Trade Agreement.

I love Canada, but they’ve taken advantage of our Country for many years!

Last Monday, Trump announced a “US-Mexico Trade Agreement” — actually a revision of NAFTA, rather than a replacement — and demanded that Canada accede to changes by Friday.

Marathon talks between Canadian Foreign Minister Chrystia Freeland and US Trade Representative Robert Lighthizer failed to reach an agreement by the deadline. Issues include Canada’s support system for dairy farmers; the US demand for elimination of Chapter 19, which protects Canadian exports, such as softwood lumber, against American tariffs; and intellectual property rights for movies, books, broadcasting, and other media.

The Trump Administration responded with Friday with the threat to exclude Canada, effectively suspending NAFTA, if Ottawa does not concede within 90 days.

There is no political necessity to keep Canada in the new NAFTA deal. If we don’t make a fair deal for the U.S. after decades of abuse, Canada will be out. Congress should not interfere w/ these negotiations or I will simply terminate NAFTA entirely & we will be far better off…

….Remember, NAFTA was one of the WORST Trade Deals ever made. The U.S. lost thousands of businesses and millions of jobs. We were far better off before NAFTA – should never have been signed. Even the Vat Tax was not accounted for. We make new deal or go back to pre-NAFTA!

Trump then went to his Virginia golf club. He closed the day with more attacks over the Trump-Russia inquiry, including against the FBI. There was also another jab at the Canadians:

Trump did not refer to John McCain throughout the day, but may have made an implicit, defiant response to Meghan McCain in his final tweet: “We shouldn’t have to buy our friends with bad Trade Deals and Free Military Protection!”