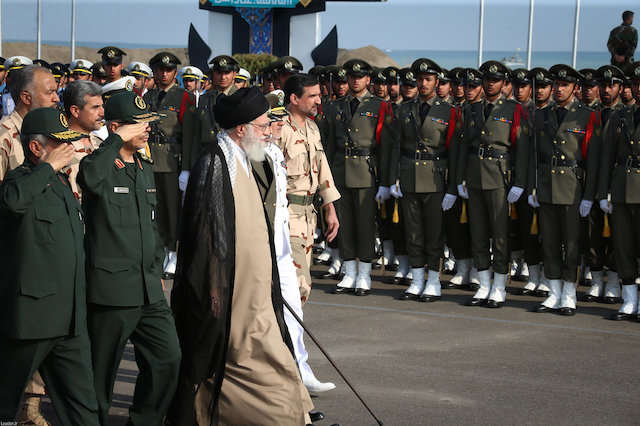 In his latest suggestion on coping with Iran’s economic crisis, the Supreme Leader has suggested that defense forces “scare the enemy”.

Ayatollah Khamenei seized headlines on Sunday with a visit to a graduation ceremony of marine cadets in northern Iran. Amid photographs in which he was accompanied by commanders as he reviewed the graduates, Khamenei cited a verse from the Qur’an: “Increase your power in order to scare the enemy and force it to retreat.”

He proclaimed that “the United States’ conspiracies have been defeated in the region”, citing the examples of “Syria, Iraq,, and Lebanon” where “God’s promises have come true and his power has been proven”.

The Supreme Leader routinely denounces the “enemies” of the US, Israel, and Saudi Arabia, but his declarations have become more strident as the Trump Administration withdrew from the 2015 nuclear deals — threatening comprehensive sanctions by November 5 — and Iran’s economic sitatuion worsened.

Last Friday, Khamenei received Russian President Vladimir Putin, calling for cooperation in areas such as the economy while proclaiming that Moscow and Tehran had displayed “a successful example of restraining the United States” in Syria’s 80-month conflict.

Meanwhile, the Supreme Leader has issued public statements playing down the scale of the difficulties with production, investment, trade, employment, and currency in the Islamic Republic.

He proclaimed on Sunday, “Political analysts and intellectuals of the world are astonished at the fact that Iran, relying on God and national power, has frustrated world powers in the region – a reality which they are admitting now.”

Regime officials backed up Khamenei’s posture with more tough talk directed at the US and its allies.

The Secretary of the Supreme National Security Council, Ali Shamkhani, said on Monday that Iran will give a response “10 times stronger than any hostile measure” against it.

Ali Akbar Salehi, the head of the Atomic Energy Organization, said on Sunday that Iran has completed a facility to build advanced centrifuges.

The statement indicated that Tehran will resume and accelerate uranium enrichment if the 2015 nuclear deal collapses after the US departure.

The Supreme Leader said in June that he had ordered preparations for a resumption of enrichment of 20% uranium, which can potentially be boosted to 95%-grade military fuel.

Salehi said, “Khamenei had ordered us to set up and complete a very advanced hall for the construction of modern centrifuges, and this hall has now been fully equipped and set up.”

Under the agreement, Iran halted enrichment of 20% uranium and shipped all stock outside the country.