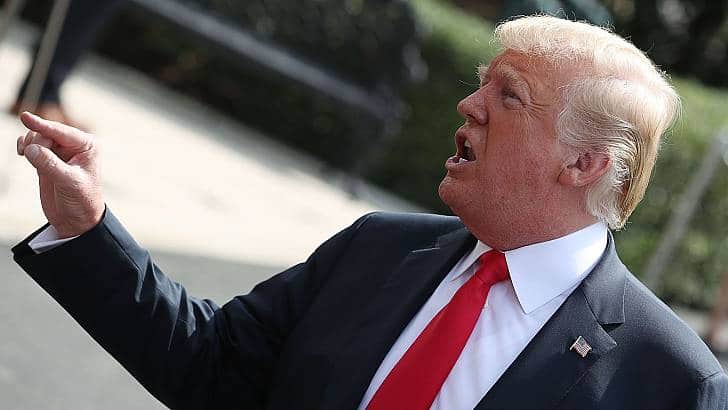 Trump: “An incredibly corrupt FBI and Department of Justice”

Donald Trump continues his war on current and former US officials, hoping to destroy the Russia investigation threatening his Presidency.

A day after removing the security clearance of former CIA director John Brennan, a vocal critic, Trump maintained a Twitter barrage, citing the right-wing activist Judicial Watch to blast the FBI and Justice Department as well as Brennan:

“….An incredibly corrupt FBI & DOJ trying to steer the outcome of a Presidential Election. Brennan has gone off the deep end, he’s disgraced and discredited himself. His conduct has been outrageous.” Chris Farrell, Judicial Watch.

Trump then focused on a current Justice Department official, Bruce Ohr, over his supposed involvement in the Russia investigation. Citing his ally Fox TV to mangle a statement from Ohr, Trump proclaimed that the official “was afraid the anti-Trump Russia probe will be exposed”.

In fact, Ohr was not involved in the start of the enquiry, and his fear was that — with Trump allies putting out declarations to undermine the investigation — sensitive intelligence sources would be “exposed”.

The official is married to Nellie Ohr, who is connected with Fusion GPS, the private intelligence firm which produced a 2016 document detailing links between the Trump campaign and Russian officials. However, despite Trump’s assertions, there has never been any suggestion by the FBI that Bruce Ohr’s work was compromised by his marriage.

Speaking on reporters on Friday, Trump made clear that his ultimate target is the Russia investigation: “For [Ohr] to be in the Justice Department, and to be doing what he did, that is a disgrace. That is disqualifying for Mueller,”

Trump ordered the revocation of former CIA Director Brennan’s security clearance three weeks ago, but the news was released on Thursday, in part to take headlines away from Trump and racism amid the revelations of former White House staffer Omarosa Manigault Newman.

Trump’s statement threatened revocations from Ohr and other former senior officials. “Senior administration officials” said Friday that documents have been drafted, and Trump wants to sign “most if not all” of them.

On Thursday, 15 former directors and deputy directors of the CIA and Office of National Intelligence issued a statement decrying the revocations as a blatant attempt to “stifle free speech” and send an “inappropriate and deeply regrettable” signal to officials. The former head of the US Special Operations Command, Adm. William McRaven, challenged Trump: “I would consider it an honor if you would revoke my security clearance as well.”

Yesterday 60 additional former CIA officials wrote: “Former government officials have the right to express their unclassified views on what they see as critical national security issues without fear of being punished for doing so”.

BREAKING NEWS THREAD: Along with many of my former colleagues, I’m standing up with @GenMhayden, @jmclaughlinSAIS, @MichaelJMorell, and other former CIA leaders to oppose the politicization of security clearances. This is our *new* open letter: pic.twitter.com/jaj5RMTtdp