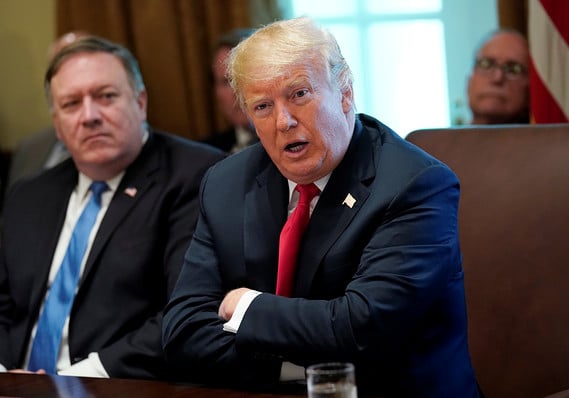 The US intelligence community is uniting against Donald Trump, two days after Trump’s removal of security clearance from former CIA Director John Brennan and amid Trump’s attacks on his agencies and officials.

Current personnel are barred from comment over Trump’s statements and actions, including a stream of angry tweets on Thursday. But 13 former directors and deputy directors of the CIA and the Office of National Intelligence put out a forthright statement about the stripping of Brennan’s clearance.

We have never before seen the approval or removal of security clearances used as a political tool, as was done in this case….This action is quite clearly a signal to other former and current officials.

One of the signatories said some who joined the statement did so reluctantly, given the longstanding principle that intelligence and military officers should remain apolitical. But they took the step because of a consensus that Trump’s behavior has gone beyond the acceptable.

Earlier in the day, retired Adm. William McRaven — a head of US Special Operations Command who oversaw the raid that killed Osama bin Laden — used the Washington Post to protest Trump’s revocation of Brennan’s clearance: “I would consider it an honor if you would revoke my security clearance as well, so I can add my name to the list of men and women who have spoken up against your Presidency.”

McRaven had not publicly criticized Trump until now. But he said in the opinion piece:

Like most Americans, I had hoped that when you became President, you would rise to the occasion and become the leader this great nation needs. Your leadership, however, has shown little of these qualities. Through your actions, you have embarrassed us in the eyes of our children, humiliated us on the world stage and worst of all, divided us as a nation.

Retired Lt. Gen. Mark Hertling tells CNN’s @jimsciutto that if President Trump continues to strip security clearances from those who speak out against his administration, then “take mine too,” adding, “because we are speaking out in selfless service to our country.” pic.twitter.com/CZFdMpTOgu

“A Stain on Our Country”

Trump, who entered office comparing his intelligence services to “Nazis” because of information that his 2016 campaign might have been linked to Russian officials, continued his assault yesterday.

He started by insulting Brennan, using the words of a hard-right polemicist and Fox TV contributor, as “a stain on our country”.

Citing another Fox commentator, he said that the FBI gave Hillary Clinton “a pass” but tried to “frame” him over the Russia connections. And then he used a third, Fox talk show host Sean Hannity, to repeat his threat to take away the security clearances of other current and former officials:

I’d strip the whole bunch of them. They’re all corrupt. They’ve all abused their power. They’ve all betrayed the American people with a political agenda. They tried to steal and influence an election in the United States.

Trump spent Thursday evening aiming at one of those officials, Bruce Ohr of the Justice Department. Using the same tactics that led to the dismissals of the FBI’s Andrew McCabe and Peter Strzok, he twisted a text from Ohr to denounce him as a “creep” involved in a “Witch Hunt”.

Trump took no notice of the statement by the former intelligence officials, but did close the day with more invective against Brennan, courtesy of his ally Judicial Watch: “He has gone off the deep end, he’s disgraced and discredited himself. His conduct has been outrageous.”

The Trump Administration has acknowledged that 565 immigrant children are still separated from their parents, months after they were seized when crossing the US border.

The Administration, which has failed to meet court-ordered deadlines for the reunion of all families, said in a filing that 565 of 2,654 children who were taken to detention centers are still separated. Of these, 24 are under 5 years old.

The filing said parents of 366 children have already been deported, and declared that parents of 154 waived their right to reunite.

Going in @ICEgov detention center in SoCal to meet still-separated dad Ascencion who signed form saying he didn’t want to be reunited with his 15 year old son — says he didn’t know what he was signing.

I’m with his lawyers from @ImmDef.

Not sure if ICE will let me meet him. pic.twitter.com/dFLLZqpdH1

The children were taken under the Administration’s “zero tolerance” policy, launched in April. Court interventions have forced the Administration to halt the separations, but poor record-keeping and deportations have prevented reunions and release of all juveniles from detention.