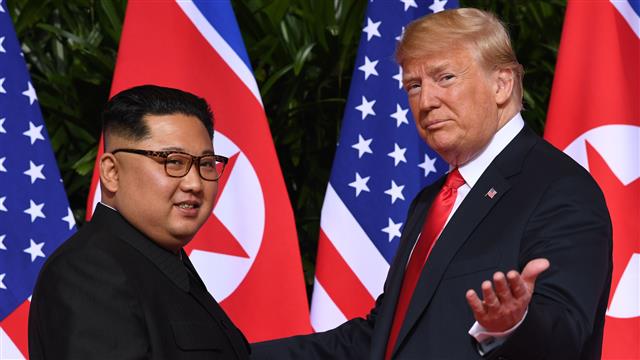 Donald Trump has cancelled high-level talks with North Korea, 10 weeks after declaring that Pyongyang was ending its nuclear weapons program because of his summit with Kim Jong-un.

Using Twitter, Trump abruptly called off a trip by Secretary of State Mike Pompeo, citing a lack of progress in the “denuclearization” that he had promised was occurring.

But, curiously, Trump heaped praise on North Korean leader Kim and — in a convoluted explanation — blamed China for the breakdown in talks:

…Secretary Pompeo looks forward to going to North Korea in the near future, most likely after our Trading relationship with China is resolved. In the meantime I would like to send my warmest regards and respect to Chairman Kim. I look forward to seeing him soon!

Pompeo and newly-appointed US special envoy Stephen Biegun, a Ford Motor Company executive, were scheduled to travel to North Korea next week.

Trump said on June 13, the day after the summit in Singapore, “There is no longer a Nuclear Threat from North Korea.” He and Kim had signed a general statement declaring the intention “to work toward the complete denuclearization of the Korean Peninsula”.

But North Korea had agreed to the same wording in the 1990s with the Clinton Administration, and Pyongyang soon made clear that it was not going to implement unilateral steps towards denuclearization. US intelligence analysts assessed that the North Koreans were continuing both their nuclear and missile programs.

Pompeo visited Pyongyang in early July, but Kim Jong-un did not meet with him and North Korea issued a statement criticizing the US. Talks stalled over the North Korean refusal to declare its nuclear inventory and US reluctance to declare a formal end to the Korean War.

The situation is likely to be complicated by Trump’s linkage of the negotiations to the US-Chinese trade war which Trump has launched. Working-level talks between Washington and China ended Thursday with no sign of progress.

The Trump Administration has implemented tariffs of up to $50 billion of Chinese goods, with possible duties on $400 billion more. China has retaliated against US products.