Twitter and the Monarchy: How the Saudi-Canadian Dispute Escalated 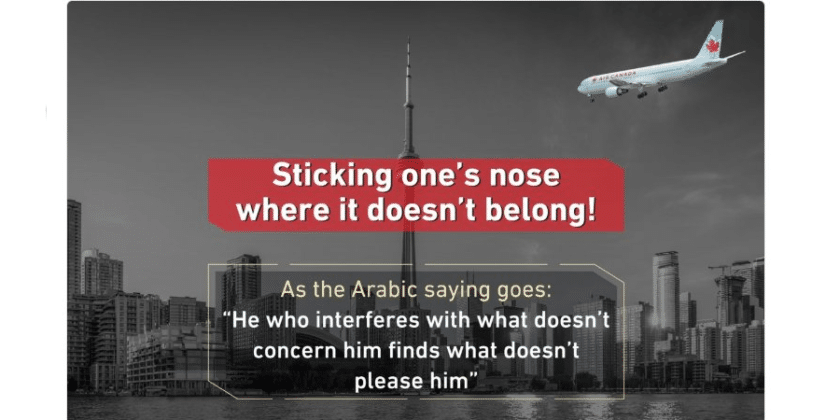 It started with a string of tweets from the Canadian Foreign Minister and then by the Canadian Embassy in Saudi Arabia. Now it is a full-fledged diplomatic spat, with Riyadh declaring the Canadian Ambassador persona non grata and calling back its own ambassador, ending trade links and selling off its Canadian assets, and bringing its students and doctors home.

The crisis was spurred by the Saudi detention of women’s rights activist Samar Badawi. Saudi authorities consider the arrest of Badawi — the sister of Raif Badawi, an imprisoned blogger who has been threatened with death and publicly flogged — to be legal. Canada’s Foreign Minister Chrystia Freeland differed on Twitter:

Very alarmed to that Samar Badawi, Raif Badawi’s sister, has been imprisoned in Saudi Arabia. Canada stands together with the Badawi family in this difficult time, and we continue to strongly call for the release of both Raif and Samar Badawi.

The Saudi Foreign Ministry fired back in a series of tweets:

#Statement | The negative and surprising attitude of #Canada is an entirely false claim and utterly incorrect.

#Statement | KSA through its history has not and will not accept any form of interfering in the internal affairs of the Kingdom. The KSA considers the Canadian position an attack on the KSA and requires a firm stance to deter who attempts to undermine the sovereignty of the KSA.

This is not the first time that Saudi Arabia has shown its apprehension over criticisms of its internal affairs by the countries of the Global North. Saudi ties with Sweden and Germany have taken a similar hit, and while the relationship with Sweden got back on track after a formal apology, there has been no improvement in the state of Saudi-German ties.

But this time apprehension has intersected with the attempt of a monarchy, under King Salman and Crown Prince Mohammad bin Salman to reshape Saudi national and political identity, projected through the economic transformation of “Vision 2030” and and social liberalization initiatives such as the greater role of women in the public sphere. Any critique that clouds this must be confronted with a strong stand, keeping international actors out of its domestic politics by discouraging others from joining the criticism.

Then there is Canada’s use of social media. For Riyadh, when it comes to discussing critical political issues or communicating concerns about human rights, the modus operandi has been the use of personal diplomacy between heads of states and their foreign affairs teams. The concept is that issues can be highlighted in a forceful but respectful manner, which does not give the impression that sovereignty is infringed.

Employing social media breaks that code. The initial Twitter row might not have escalated, if the Canadian Embassy in Saudi Arabia had not tweeted the sentiments of Foreign Minister Freeland in Arabic. In the eyes of the Saudi monarchy, this magnified the interference of a foreign power in its internal domain, without making any contribution to diplomacy.

In Saudi Arabia, the model of a rentier state, a large section of the citizenry depends on the monarchy for livelihoods and basic necessities like health and education. That structure, with the Saudi state embedded, means it is likely that Riyadh can go through its measures against Canada without any hindrance. And that in turn means this crisis is likely to persist for quite some time.