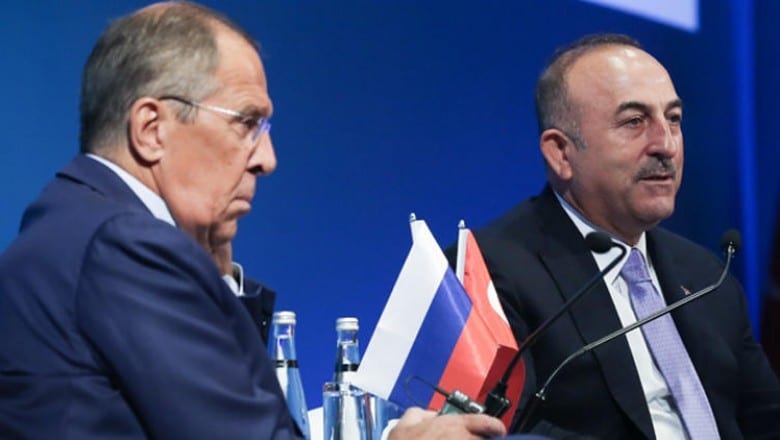 UPDATE 1130 GMT: Al-Haj al-Youssef, a resident of Idlib city, summarizes Moscow’s tactics for an offensive on the opposition area: “[The Russians] are excellent manipulators and know exactly how to maneuver in politics. Whenever they wish to attack, they have a pre-existing cover, be it al-Qaeda or other terrorist factions, as they call them.”

The Assad regime has announced artillery attacks in southeastern Idlib under the guise of “intensive operations against terrorists’ gatherings and defense lines”, claiming the killing of “scores” of fighters and destruction of vehicles.

Russia has pressed for a pro-Assad offensive on Idlib Province, the last major opposition area in Syria but Turkey — for now — has resisted.

Russian Foreign Minister Sergey Lavrov set up the pretext in a Tuesday meeting for an assault, saying that “extremists” are firing on Assad regime and Russian positions from the area. The same cover has been used for pro-Assad reoccupations of East Ghouta near Damascus and of much of southern Syria this spring and summer.

Russia, Iran, and Turkey declared a “de-escalation zone” last year over Idlib and parts of western Aleppo and northern Hama Provinces. But Moscow has used the tactic to buy political time for pro-Assad forces to gather for assaults, and then enabled the offensives with bombing.

In the case of Idlib, the tactic is complicated by Turkey’s effective protection of the opposition area. In August 2016, Turkish forces intervened alongside rebels, first to take territory from the Islamic State and then in early 2018 to capture much of the Kurdish canton of Afrin.

Early this year, after a pro-Assad offensive seized a slice of southeast Idlib Province, Turkey set up a ring of 12 observation posts around Idlib and parts of Hama and Aleppo Provinces. Russian and regime forces have continued bombing and bombardment just outside the rings, including attacks last Friday that killed more than 30 civilians.

After meeting Lavrov on Tuesday, Turkish Foreign Minister Mevlut Cavusoglu pushed back on the talk of an offensive, saying he hoped Ankara and Moscow can find a political solution.

He took on the Russian’s invocation of “extremists”:

We need to determine these terrorist and eliminate them with intelligence and military forces. It would be a massacre to bomb Idlib, civilians, hospitals, schools just because there are terrorists….

Turkey, which hosts more than 3 million Syrian refugees, is concerned about another wave of displaced Syrians caused by an assault. An estimated 2.5 million people, many of them fleeing other parts of Syria, are in Idlib.

Last weekend Turkish President Recep Tayyip Erdoğan told a rally that Turkey will not only maintain but expand “safe zones” in northern Syria.

How Far Will Moscow Go?

Two weeks ago Russian officials signalled publicly to the Assad regime that the time was not right for an Idlib offensive. Moscow’s envoy for Syria, Alexander Lavrentiev, said:

I’d rather refrain from speaking about the city’s storming or a pending operation. There are too many rumors and they are ungrounded. Any large-scale operation in Idlib is out of the question.

But Lavrov has pursued a shift in the Turkish position with the repeated declaration of “terrorism”, holding up the jihadist bloc Hay’at Tahrir al-Sham, which is the leading military force in parts of Idlib.

The Foreign Minister is also playing the card that recapture of opposition territory would allow refugees to return:

A huge (portion) of Syria has been freed of terrorists. It’s time to rebuild infrastructure, all living necessities for refugees from Turkey, Lebanon, Jordan and from Europe to start returning to their home.

In recent weeks, Russia’s Defense Ministry has put out a series of unsupported numbers of refugees who are ready to resume life under the Assad regime, with the declaration last week of 1.3 million prepared to return.

In fact, only a small portion of the 6.6 million registered refugees have crossed back into the country, according to the UN.

Lavrov snapped in response, “It was strange to hear the statement of the UN high commissioner for refugees….If this statement really took place, then it’s just a lack of awareness, if not something more serious.”

Kurdish-Led Group Holds 2nd Round of Talks with Regime

The Kurdish-led Syrian Democratic Council has held its second round of talks with the regime in Damascus.

SDC co-chair Riad Darar said the discussions were again on decentralization, with the Kurds seeking autonomy, and the Constitution.

The SDC is the political branch of the US-backed Syrian Democratic Forces, which took much of the north and east of Syria from the Islamic State since autumn 2015. Assad regime officials have insisted that they will regain control of the territory.

Initial talks last month foundered as the SDC rejected any political resolution that does not include decentralization.

Darar said the Assad regime proposed on Tuesday that Syrian Kurdistan take part in the regime’s local elections in September.

But he indicated that the SDC would rather set aside “premature” political initiatives and focus on control of infrastructure: “We need to agree on service provision first and this could build trust between us and with the people.”