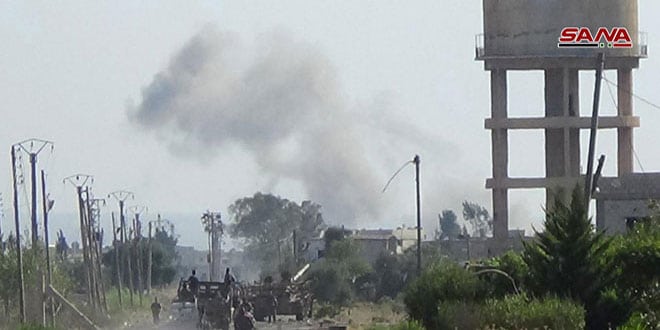 1,000 to 1,500 ISIS-linked fighter surrender and moved from western Daraa Province

Pro-Assad forces completed the defeat of an Islamic State-linked faction in southwest Syria on Tuesday.

But even as Jaish Khalid ibn al-Walid was surrendering in western Daraa Province, ISIS was pointing to the future with the killing of a regime general and two other high-ranking officers in Damascus Province.

The regime allowed 1,000 to 1,5000 remaining JKW fighters to leave the Yarmouk Basin in the southwest, in return for the release of about 30 men and women seized by ISIS last week in deadly attacks in the southeast. Some reports said the fighters are moving to the Badia desert in eastern Syria.

Earlier on Monday, pro-Assad units, enabled by intense Russian bombing, took JKW’s main position in the town of Shajara. That left only a few villages in the hands of the jihadists.

The pro-Assad/Russian offensive began on June 19 against opposition territory in Daraa and Quneitra Provinces, near the Jordanian border and the Israeli-occupied Golan Heights. The attacks concentrated on forcing capitulation agreements with rebels, before turning to ISIS.

About 250 people were killed in the assaults. An estimated 320,000 were displaced, although some have now returned to their homes.

Hours after JKW’s surrender on Monday, the Islamic State claimed responsibility for an ambush killing Brig. Gen. Nadim Asaad and the other officers near Dumayr, northeast of Damascus (see map).

In last week’s attacks, Islamic State fighters stormed eleven villages in Sweida Province and carried out suicide bombings in Sweida city in southeast Syria. An estimated 215 people, most of them Druze inhabitants, were killed.

Russia’s envoy for Syria, Alexander Lavrentyev, has said that Moscow convinced Iranian forces in Syria to withdraw at least 85 km (53 miles) from the Israeli-occupied Golan Heights.

Lavrentyev told the Sputnik site, “We took into account the Israeli concerns. We managed to attain the pullout of Iranian units 85 km (53 miles) from the Israeli border.”

Israeli Prime Minister Benjamin Netanyahu has publicly demanded the complete withdrawal of Iranian military personnel from Syria. However, Israeli-Russian negotiations have focused on a zone, free from Iranian or Iranian-supported forces, in the southwest of the country.

Israel had threatened intervention against any pro-Assad offensive to recapture opposition territory in southern Syria. However, despite some Iranian-supported foreign militia being placed within the regime military, Israel made no move after talks with Moscow.

Asked if Israel is less concerned over the presence of the Iranian-backed units in the south, Lavrentyev maintained: “Yes, of course, we are certain of this.”

A “senior Israeli official” said, moments after a meeting between Russian Foreign Minister Sergey Lavrov and Netanyahu in Jerusalem, that Israel was sticking to its demand of no Iranian military foothold, the removal of all long-range missiles, and the closure of factories producing precision-guided missiles.

“Iran wants to turn Syria into a second Lebanon. And we’re determined to prevent that,” the official said.