TrumpWatch, Day 554: Trump Fumes Over Cohen and 2016 Meeting with Russians 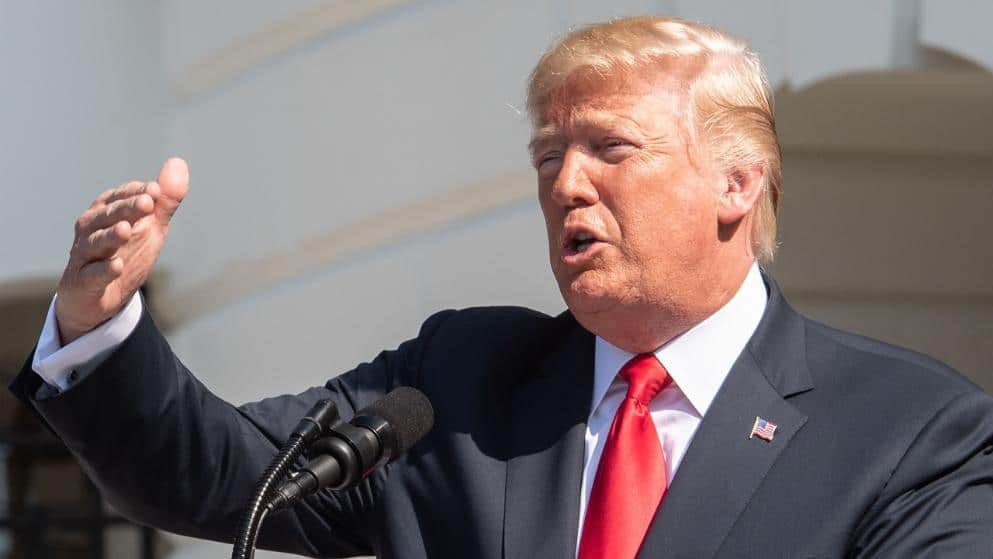 Stung by the latest revelation from his former lawyer Michael Cohen, Donald Trump rails against the claim that he knew in advance of a June 2016 meeting with three Kremlin-linked envoys, discussing the provision of information damaging to Democratic nominee Hillary Clinton.

Trump opened Friday morning with fury that his appearance in Illinois, to promote US steel amid the Administration’s tariffs on American allies, had been overshadowed by the breaking story. He denied any awareness of the meeting in Trump Tower between the Russians and his son Donald Jr.; his campaign manager Paul Manafort; and his son-in-law Jared Kushner. And he lashed out at Cohen, including his retention of the high-profile lawyer Lanny Davis, a former advisor to Bill and Hillary Clinton:

…..I did NOT know of the meeting with my son, Don jr. Sounds to me like someone is trying to make up stories in order to get himself out of an unrelated jam (Taxi cabs maybe?). He even retained Bill and Crooked Hillary’s lawyer. Gee, I wonder if they helped him make the choice!

Federal prosecutors in New York are looking at Cohen’s financial affairs, including his ownership and management of taxi companies.

Reportedly angered at his treatment by Trump, following an April raid by the FBI on his home, hotel, and office, Cohen has begun providing information that could damage the President. Earlier this week, his team released an audio pointing to Trump’s knowledge of a $150,000 payoff to one of his mistresses, Karen McDougal.

But the latest assertion is a far greater risk to Trump amid investigation of his campaign’s ties to Russian officials. Sources said Cohen will attest, including in any court proceedings, to Trump’s knowledge of the anti-Clinton intervention by Moscow. The former attorney says he was in the room with several others when Trump approved the meeting.

The discussion was set up by a broker for a Russian-Azerbaijani billionaire and Trump business associate, Aras Agalarov. It was welcomed by Donald Trump Jr. — “I love it!” — once the possibility of the anti-Clinton material was mentioned.

Trump Sr. has maintained that he did not know of the meeting until July 2017, when it was revealed by The New York Times. He is under scrutiny for reportedly dictating his son’s initial false statement that the discussion was about “adoptions”.

Further betraying his concern, Trump also opened Friday with another blast at Special Counsel Robert Mueller: “Only Collusion with Russia was with the Democrats, so now they are looking at my Tweets (along with 53 million other people) —- the rigged Witch Hunt continues!”

On Thursday The New York Times, citing three people briefed on the matter, said Mueller is looking at Trump’s tweets over possible obstruction of justice. These include Trump’s derogations of FBI Director James Comey, whom he fired in May 2017 in a failed attempt to halt the Russia investigation, and Attorney General Jeff Sessions.

Amid the latest revelations of his possible links with Moscow, Trump has increasingly resorted to the false allegation that Russia is colluding with Democrat politicians and officials and will do so again in the 2018 mid-term elections.

Russian President Vladimir Putin — while denying any collusion — said at his July 16 summit with Trump that he wanted the businessman and reality TV star to win in 2016.

Donald Trump finally chairs a meeting of senior national security advisers on the safeguarding of November’s Congressional elections from Russian interference. But — in keeping with his denial of any intervention by Moscow in the 2016 Presidential ballot — he issued no new directives to counter or deter the threat.

The meeting lasted less than an hour, reviewing efforts by federal agencies to help state and local election officials, and to investigate and hold accountable Russian hackers.

The White House tried to show an active Trump: “The President has made it clear that his administration will not tolerate foreign interference in our elections from any nation state or other malicious actors.”

But at the Helsinki Summit on June 13 with Russian President Vladi­mir Putin, Trump criticized his intelligence agencies and said he believed Putin’s denial of any Russian operations.

Trump was forced by White House staff and GOP legislators into a half-hearted statement ackonwledging Moscow’s interference, but he soon retracted the retraction and invited Putin to visit the White House in the near-future.

A “senior administration official” maintained, “It was a good meeting. Everybody was on the same page. We’re doing a lot of good work across the administration.”

Soon after Trump took office, the White House dismissed its chief officer for cyber-operations. In the absence of an Administration lead, the head of the National Security Agency created a Russia “small group” composed of NSA and military cyber-specialists who are detecting and countering Russian efforts to target the elections. US Cyber Command, using NSA intelligence, can carry out offensive operations to disrupt the activity.

At least three congressional candidates have been targeted by Russian military hackers. None of the attempts was successful, according to an executive with Microsoft.

One of the targets was Senator Claire McCaskill, a Democrat from Missouri who faces a tough reelection campaign. About the time that Russian hackers tried to obtain the e-mails of McCaskill in August 2017, Donald Trump made a high-profile visit to Missouri castigating the Senator.

The Trump Administration claimed that more than 1,800 children who are 5 years and older have been reunited with parents, after they were seized under the Administratin’s “zero tolerance” order from April. But the others face log-term separations, with the parents of more than 400 already deported from the US and another 130 waiving their rights to reunion.

On June 26, Judge Dana Sabraw gave the Administration 14 days to reunited children under 5, held in “tender care shelters”, and those over 5 within 30 days.

More than 40 of 103 toddlers have not been reunited because of deportations, incarcerations of parents, or Government assertions that the parents are unfit to care for their offspring.