TrumpWatch, Day 544: Staff Pull Back Trump After His Alliance With Putin 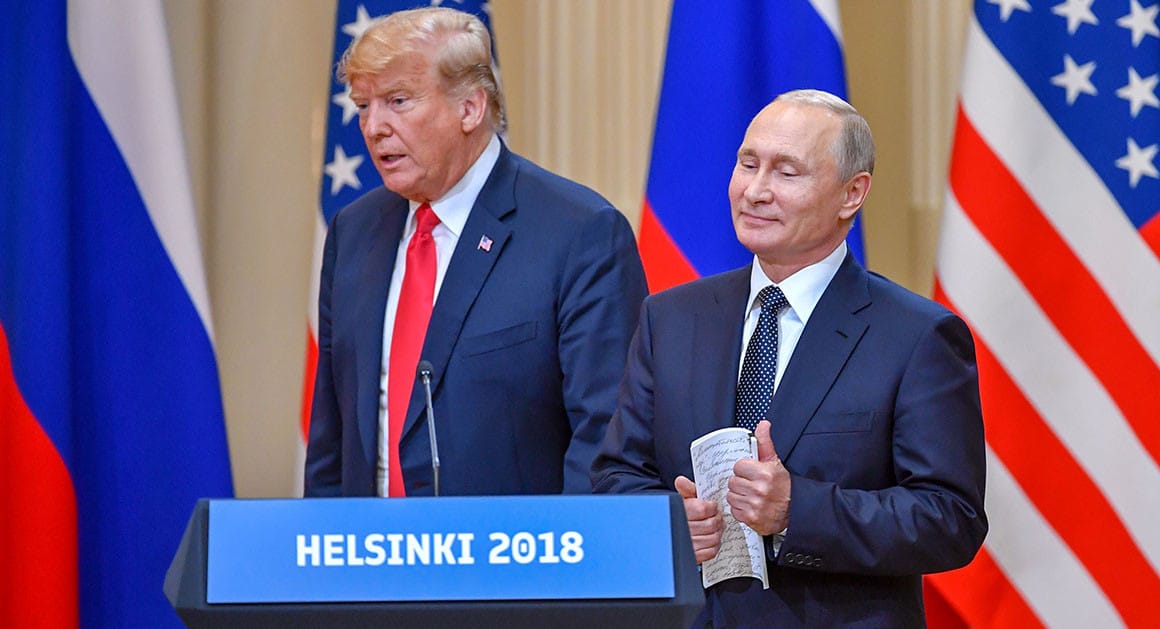 Under pressure from Republican legislators and his White House staff, Donald Trump steps back from his Monday remarks supporting Russia’s Vladimir Putin over US intelligence agencies.

At the Helsinki Summit, Trump endorsed Putin’s “strong” and “forceful” denial of Moscow’s interference in the 2016 US election, even though 12 Russian military intelligence officers were indicted last week for hacking and disseminating material from the Democratic National Committee and senior staff of Presidential nominee Hillary Clinton. Director of National Dan Coates warned that Russia’s cyber-threat was equivalent to that of terrorists before 9-11.

Yesterday Trump read a script which tried to modify his remark at the Helsinki press conference alongside Putin:

“I have President Putin; he just said it’s not Russia. I will say this: I don’t see any reason why it would be.”

Trump declared that he had misspoken, meaning to say, “I don’t see any reason why it *wouldn’t* be.”

But Trump didn’t address other statements in the press conference in which he backed Putin, including the Russian leader’s proposal that his own personnel question the 12 indicted Russian military intelligence officers. Nor did he withdraw the attacks on the FBI as well as Democrats which were his immediate response to a question of whether he thought Putin was accountable for any Russian misdeed.

Trump watered down his supposed clarification with impromptu additions. After citing the US intelligence community’s unanimous conclusion of Russian interference, Trump said, “Could be other people also. A lot of people out there.”

Atop the script, Trump put his own key statement in black Sharpie pen, “THERE WAS NO COLUSION [sic].”

And he struck out a line about bringing “anyone involved in that [election] meddling to justice”, apparently sustaining his concession to Putin with no demand for extradition of indicted Russians.

Trump’s appearance came after a day of frustration and anger among his staff and leading Republicans.

White House Chief of Staff John Kelly, who was in Helsinki, was reportedly so agitated that he called GOP legislators to encourage challenging statements and to ask them to speak with Trump.

Senate Majority Leader Mitch McConnell crystallized the discontent among GOP legislators, “The Russians need to know there are a lot of us who fully understand what happened in 2016, and it better not happen in 2018.”

Still, as he left the White House conference, Trump refused three times to answer a reporter’s question if he would publicly condemn Putin for election interference, saying “Thank you” or ignoring the question.

And by Tuesday night, Trump was trying to regain the offensive. He tweeted, “The meeting between President Putin and myself was a great success, except in the Fake News Media!”