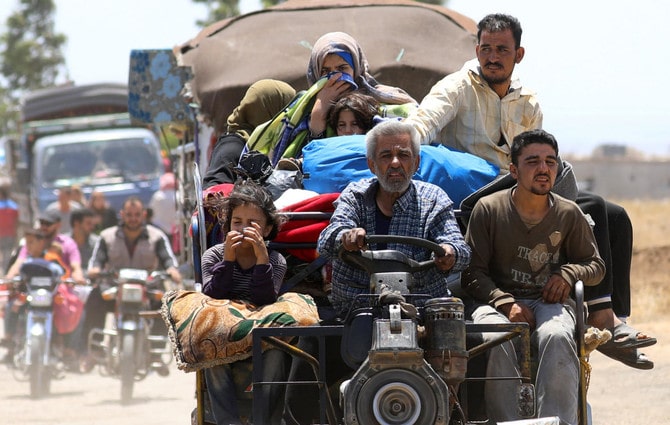 Surrender talks broke down in southern Syria on Saturday, but some towns did capitulate to the 12-day offensive by the Assad regime and its foreign allies, including Russia.

Rebels of the Southern Front rejected terms proposed by Russian officials on the second day of negotiations in the historic town of Bosra al-Sham, on the Jordanian border.

The discussions were considering whether regime control would be re-established, but without the regime’s army or police entering the area. Rebels are asking that Russian military police provide security.

After a similar breakdown of talks in East Ghouta near Damascus in April, the Assad regime used a double chemical attack on the town of Douma to force a rebel capitulation. Russian and regime forces then took over, with about 50,000 people forcibly displaced to northern Syria.

Following Saturday’s haltssion, Russian and regime warplanes renewed the bombing across Daraa Province that has killed at least 126 people and displaced more than 150,000 since June 19. Local sources said one strike killed at least 10 people, including five children, in the town of al-Sahwa, east of Daraa city.

The assault cracked resistance in several towns in both the east and west of Daraa Province, with reports of surrender agreements. Regime media broadcast footage from inside the towns of Dael and al-Ghariya al-Gharbiya, where people were shown chanting pro-Assad slogans and waving regime flags.

After weeks of bombardment of Daraa — where the Syrian uprising began in March 2011 — pro-Assad forces began their ground offensive on June 19, breaking the “de-escalation zone” proclaimed by the US and Russia last July. Russian warplanes, setting aside the zone and Foreign Minister Sergey Lavrov’s public call for non-Syrian troops to leave the area, joined the attacks several days later.

Iranian-led foreign militia are also involved, defying Israel’s threat to intervene if Hezbollah or Iranian-backed fighters are present in Daraa and Quneitra Provinces, near the Jordanian border and the Israeli-occupied Golan Heights.

#OGNMaps: Rebels strike back in Daraa

OGN maps gives you a closer look at the latest situation in Daraa. Who still has control of what area? What areas were lost and what areas were regained by opposition forces?