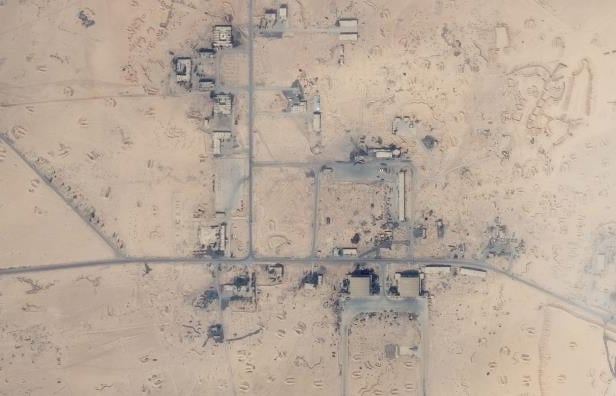 The Assad regime accused Israel of carrying out another airstrike on a key base in central Syria on Sunday.

State media said Israeli missiles were fired on the T4 base in Homs Province, which was also hit in February and in April and which has Iranian personnel directing operations.

As with all Israeli attacks, the regime issued unsupported claims that air defense had downed some of the missiles. It also said an Israeli warplane had been struck and others had been “forced the rest to leave the airspace”, while acknowledging that damage had been caused to the base.

There has been no verification in earlier episodes of missiles being blocked, with Russia withholding its advanced S-400 defense systems from the regime. With Israeli jet firing the missiles from northern Israel and from Lebanese airspace rather than from inside Syria, only one — in the February attacks on sites across the country — has been downed by anti-aircraft fire.

A pro-opposition site claimed that nine pro-Assad fighters were killed in the strike. There is no confirmation for the assertion so far.

Israel has periodically attacked targets inside Syria throughout the 88-month conflict. Initially the focus was on preventing the transfer of Iranian weapons and missiles to Lebanese’s Hezbollah, a key ally of the regime, and on deterring any Iran-Hezbollah move into southwest Syria near the Israeli-occupied Golan Heights.

This year, operations have expanded as Israeli Prime Minister Benjamin Netanyahu has declared that no Iranian military presence will be tolerated in Syria. In February, Israel said it attacked T4 because the Iranians had launched a drone operation over northern Israel from the base.

In the April attacks across Syria, the largest by Israel since the early 1980s, at least seven Iranian personnel were killed at T4. The Israelis have also reportedly attacked bases being developed by the Iranians near Damascus.

After more than 30 rockets were fired on the Israeli-occupied Golan Heights border on May 10, Israel carried out a two-hour attack with dozens of missiles on Iranian targets and regime air defense systems.

Israel had also said that it would respond if Hezbollah or Iranian-supported fighters were involved in the pro-Assad offensive reoccupying territory in southern Syria, near the Jordanian border and the Israeli-occupied Golan Heights. However, the Israelis have refrained from direct confrontation since the June 19 offensive, despite evidence that Iranian-backed militia are among the advancing forces.