Syria Daily: 270,000 Displaced in 2 Weeks from Daraa Province in South 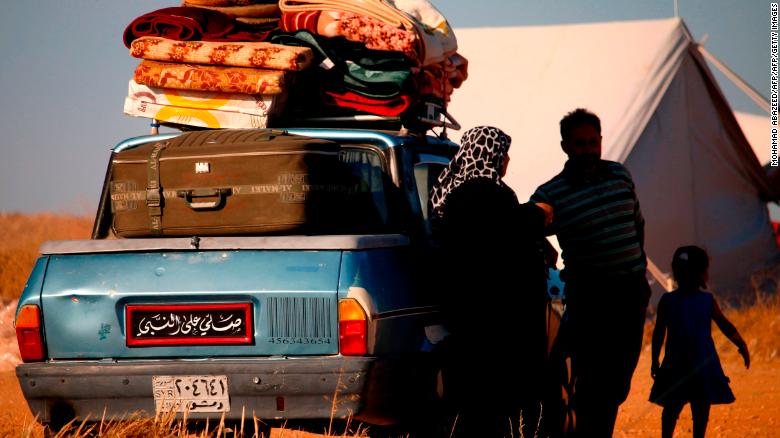 At least 270,000 people — about 1/3 of the population — have been displaced by pro-Assad assaults on Daraa Province in southern Syria since June 19.

UN Refugee Agency (UNHCR) spokesman Mohammad Hawari confirmed the figure on Monday, saying it had “exceeded our expectations of 200,000“. The agency expects the number to rise, with civilians fleeing to the borders with Jordan and the Israeli-occupied Golan Heights, but with both country refusing to allow entry.

Hostilities in south-west #Syria displaced an estimated 271,800 people, including some 60,000 people displaced to areas in close proximity to the Nasib/Jaber border crossing with #Jordanhttps://t.co/UU3SMIEwui pic.twitter.com/PCCgqYGo4e

The UNHCR said about 164,000 displaced are now in camps and villages in Quneitra Province, close to the Golan Heights area.

The pro-Assad offensive to regain Daraa Province, where the Syrian uprising began in March 2011, began two weeks ago. Russia soon joined with airstrikes, breaking a “de-escalation zone” it had declared with the US last July, enabling ground advances in eastern Daraa Province and forcing surrender agreements in some towns in both the east and west.

The Syrian Network for Human Rights reports that 212 people were killed in the onslaught between June 15 and June 30. UNHCR noted reports that “suggests indiscriminate attacks on health facilities, schools, civil defense centers, and offices of local NGOs”.

About 6.2 million Syrians are internally displaced and 6.6 million are registered refugees. The total of 12.4 million is more than half Syria’s pre-conflict population.

Amnesty International’s Lynn Maalouf urged Jordan, which has about 630,000 registered refugees, to accept some of the newly displaced:

Daraa residents are effectively trapped — many of those who are displaced are living in makeshift tents in the searing heat with insufficient food, water or medical care, and with the constant fear of being exposed to attacks at any given point. Jordan’s border is their only gateway to safety.

But in a curious statement, given the scale of the pro-Assad air and ground assault — and Russia’s essential involvement — Jordan’s Foreign Minister Ayman Safadi said talks with Russian counterpart Sergey Lavrov, in Moscow on Wednesday, would prepare a peace deal which would allow tens of thousands of refugees to return from Jordan to Syria:

I look forward to a frank discussion to discuss how to arrive at a ceasefire as soon as possible.

There are speedy developments on the ground and the meeting hopefully will result in more understandings and steps forward containing the crisis and prevent more devastation.

Safadi said “tens of trailers…on the Jordanian border” were ready to deliver aid, but the UN needed to get approvals from the Assad regime for any provision of assistance.

On Sunday and Monday, a 37-truck convoy brought water and food for about 35,000 people to the Jaber/Nasib border area, according to UNHCR.

Near the Golan Heights, the Israel Defense Forces provided several tons of supplies, including food, medicine, and clothes, last weekend to some of the displaced. However, the IDF emphasized that none of them, apart from six admitted for urgent medical treatment, will be allowed into Israeli-controlled territory.