Stuck in Lebanon: A Syrian Refugee Family in Limbo 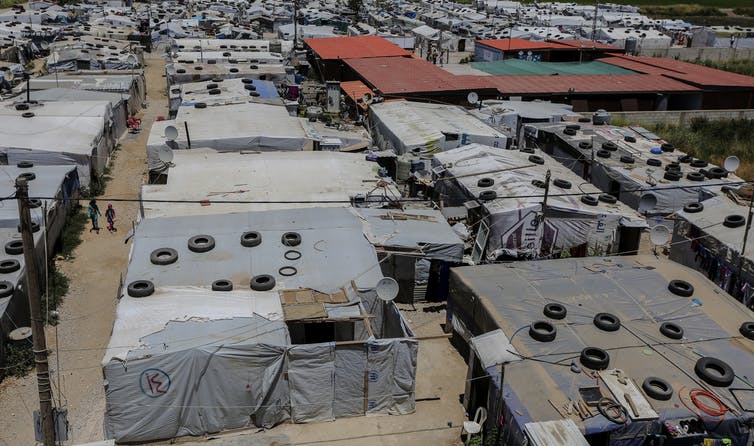 9-year-old Reham: “I want to go to Norway so I can be with my grandparents. I miss them so much. I just want to see them and be in their arms.”

I don’t remember exactly how Reham and I came to meet on Facebook but I do recall how articulate she was, her love for her younger sister Fatima and her quiet desperation for a new life.

Reham is just nine years old, a Syrian refugee living in a small town in the north of Lebanon with her parents and three siblings, the youngest of whom is just eight months old. Her father Abdul told me that the family moved to Lebanon in 2012 when Reham was three and her sister less than one, fleeing the war in Syria that had ripped their world apart.

Until then he had been a construction worker, one of hundreds of thousands of Syrian workers travelling back and forth across the border filling gaps in the Lebanese labour market during the period of reconstruction that followed the end of the civil war in 1990. Six years later, they are still in Lebanon, waiting for the war to end and a chance to rebuild their lives. He told me:

We had a house in Syria. There was a garden where there were friends and a school. Now the war has destroyed everything. Everything was ruined and our dreams and the dreams of many children were destroyed.

Reham and her family are among an estimated 1.5m Syrian refugees living in Lebanon, around a third of whom are not registered with UNHCR and most of whom have few if any rights. Research that my colleagues and I undertook with Syrians who risked everything, including the lives of their children, to reach Europe in 2015 shows clearly that the decision to move from Lebanon was often the result of a deteriorating situation and lack of hope for the future.

Three years on and there is evidence from UNHCR and the World Food Program that Syrian refugees in Lebanon are more vulnerable than ever, with more than half now living in extreme poverty. As the level of humanitarian aid to support Syrians living in Lebanon has declined, so too has their quality of life, with regular reports of fires ripping through the makeshift tents and a lack of basic services including water supplies, latrines and drains. Those who are able to find work report low wages and persistent racism and discrimination. In October 2017, the food rations on which Abdul and his family depended were cut off due to a lack of funding.

But it is the situation for the children, and in particular the lack of access to education for Reham and Fatima, that the family finds most intolerable. An estimated 280,000 Syrian children are out of school in Lebanon and some have never set foot in a classroom. Some families need children to work to supplement the household’s very limited income. Others, almost always girls, are forced into early marriages to secure the child’s economic future. For Abdul, it is the costs of transportation that are the biggest problem:

We have big issues with transport for school every day. The school is very far away from our house and it costs a lot of money. I do not have enough money to send them to school.

Like thousands of other Syrians, Abdul and his family are stuck in limbo, unable to rebuild their lives in Lebanon or return to Syria, and with few options for the future.

While some Lebanese have shown solidarity with refugees, there are growing tensions over resources and jobs. Even as the conflict in Syria continues, Lebanese politicians have become increasingly vocal since 2017 in calling for the refugees to go home. Since 2016, some municipalities have forcibly evicted Syrian refugees from their homes. Growing numbers of those living in Lebanon worry that they will be forced to return to a war zone.

Meanwhile, European Union efforts to prevent Syrian refugees travelling onward to Europe have been increasingly effective. The EU-Turkey deal in March 2016, together with the closure of the Macedonian border, made it increasingly difficult for Syrians and others to seek international protection in the EU, effectively trapping tens of thousands of people in Greece. Despite efforts to increase legal routes and reduce the dangers of onward migration across the sea, UNHCR estimates for the number of Syrian refugees in need of resettlement vastly exceed the number of places available.

Abdul’s efforts to find a long-term solution to his family’s situation have been fruitless to date. Reham’s grandparents lived with the family in Syria and again in Lebanon before they were resettled to Norway in 2015. Reham’s uncle lives in the Netherlands. Neither constitute sufficiently close family connections to make them eligible for family reunification. Abdul says he went to the refugee commission in Lebanon many times, but is still waiting for an answer on whether the family can be resettled.

Abdul’s messages to me are full of frustration and despair. He pleads with me to find an organisation that can help him to get out of Lebanon with his family. “I love my children, I just want to provide a decent life for them,” he says. “I just want them to be safe.” His fear of what might happen to his children in Lebanon drives his thoughts about the future. He tells me that he is prepared to go to any country and hints that he will do whatever it takes to achieve this objective.

But Abdul’s options are limited.

Even as the situation deteriorates in Lebanon, there’s a lack of safe and legal routes to enable Syrians and other refugees to access the rights to which they and their children are entitled under international law. There are, however, some new and potentially significant initiatives which could change all that, providing a lifeline for children such as Reham and her sister.

Most notable among these is the Humanitarian Corridors initiative. Launched in 2016 and operating with full cooperation from the Italian government without being state funded, it offers vulnerable refugees the possibility of safe and legal access to protection in Italy and in so doing both widens and deepens the concept of protection. To date, the numbers benefiting have been relatively small, around 1,000 people in total, but for Abdul it remains a possibility worth pursuing.

Reham is less sure. “I don’t want to go to Italy,” she says. “I want to go to Norway so I can be with my grandparents. I miss them so much. I just want to see them and be in their arms.”

It’s hard to know what will happen next for this family or thousands like them. The world, it seems, has long stopped caring.