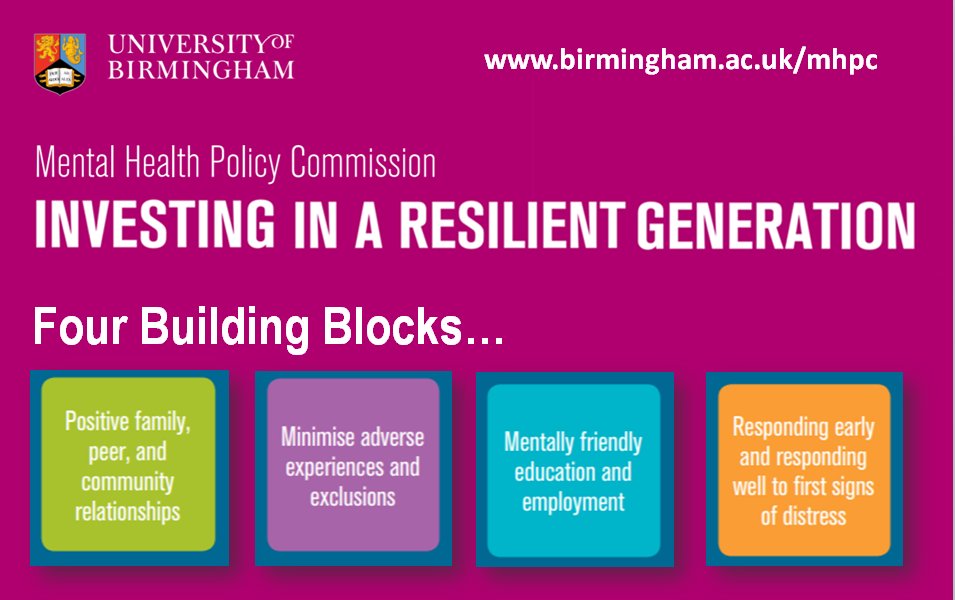 “Mental illness is the single largest global burden of disease. We need a national research, development and delivery effort to build on what we already know can work.”

Originally published by the University of Birmingham:

A radical new Government Strategy focused on preventing, and not just treating, mental ill health in young people is required as a report by the University of Birmingham reveals that an additional £1.77 billion funding and 23,800 staff are needed to plug the current treatment gap.

The only way to stem the rising tide of mental health problems amongst the young is a major drive to tackle the causes rather than putting all the effort into attempting to increase the workforce and funding needed to meet demand for treatment, says the University of Birmingham’s Mental Health Policy Commission following its major inquiry into the mental health of children and young people.

As the NHS considers its plan for the next 10 years following the Government’s announcement of a £20 billion funding boost, the Commission is calling on Prime Minister Theresa May to ensure it includes funding for new prevention policy and practice in childhood and adolescence to address causes of poor mental health across the nation.

The Commission’s independent report “Investing in a Resilient Generation”, launches today at Westminster and reveals the scale of the shortfall in the funding and workforce – from psychiatrists to nurses – needed to match current demand for mental health provision for young people aged 25 and under.

The Commission says the figures, produced on its behalf by NHS Benchmarking as part of the inquiry, illustrate the need for a paradigm shift to invest in the nation’s mental resilience, starting early and supporting families, schools, workplaces, and communities to be the best they can be at nurturing the next generation.

The report comes at a time when half of life-long mental health problems show their first signs by the age of 15, and three-quarters by the age of 25.

Currently, only seven pence in every pound the NHS spends goes on children and young people’s mental health, while poor mental health costs the taxpayer an estimated £105 billion per year.

The authors of the report, which contains powerful evidence from a range of contributors including young people currently experiencing mental health challenges and health experts, argue for a two-pronged approach to prevention: maximising young people’s resilience, and minimising the risks they face in life.

The report argues for the funding and creation of a 10-year Government Grand Challenge that focuses on investing in a resilient generation – shaped by Public Health England, local government and Innovate UK – to close the prevention gap and recognise that mental illness is the single largest global challenge of disease.

The Commission wants change in the way spending on prevention is accounted for to support investment, along with the radical upscaling of Public Health England’s Prevention Concordat for Better Mental Health.

It is also calling for new public health policy that would see the systematic measuring of the wellbeing of children and young people, as well as investment in ‘big data’ research to better understand societal challenges and how to respond to them, and Government policy reviews to prevent mental health issues arising as a consequence of inequality.

Meanwhile, it also wants local Health and Wellbeing Boards or Combined Authorities, supported by local authority Public Health leads, to initiate a local dialogue with other agencies, schools and community groups about how they can work together to build a resilient generation in their area.

Professor Paul Burstow, former Minister of State for the Department of Health and the Chair of the University of Birmingham’s Mental Health Policy Commission:

We need to increase access to mental health treatment and care for young people. But the scale of the workforce challenge makes it essential that we get serious about prevention too.

Mental illness is the single largest global burden of disease. We need a national research, development and delivery effort to build on what we already know can work.

The Government’s Industrial Strategy offers a model. Closing the mental health prevention gap and investing in a resilient generation should become one of the Government’s Grand Challenges.

The nation’s future prosperity requires a sustained investment in the nation’s mental resilience: starting early, supporting families, schools, workplaces and communities to be the best they can be at nurturing the next generation.

What is required is a whole-systems change and ownership of the mental health and resilience agenda across national and local government, and across non-statutory agencies and communities, as no single agency can achieve the necessary shift on their own.

Public Health England Chief Executive Duncan Selbie: “The University of Birmingham Mental Health Policy Commission makes a clear and compelling case for investing in mental health prevention which helps those affected, their families and friends and is good for the economy.”

Former Cabinet Secretary Lord Gus O’Donnell, who authored one of the report’s forewords:

As our growth rate slows down, so will the growth of tax revenue, meaning we need to invest in prevention now to ensure we can afford the treatment that will be needed in the years to come.

The next generation are already facing a tough time given the level of house prices and rents. To look after their mental health we need to devote more resources to prevention, diagnosis and treatment and to reverse the bias there has been to treat physical illnesses as more important than mental ones.

Over the last few years we’ve seen an extraordinary shift in awareness and understanding around mental health and it is on the public agenda more than ever. But, this new awareness of mental health exposes the absence of fundamental building blocks that we need to address a major health and social issue, one that has been under-resourced and ignored for decades.

Nowhere is this more apparent than in the field of prevention. The longer people go without help the likelier they are to require more long-term and costly treatment, lose their jobs, lose their potential or lose hope. There is currently limited ambition around mental health prevention and local government spend only one per cent of its public health budget on preventative mental health initiatives.

We welcome this Commission, which sets out a persuasive argument for early investment so that future generations are better prepared for life’s challenges.

We back the call by the University of Birmingham Mental Health Policy Commission for a pledge that the long-term NHS plan should include funding for the prevention of mental ill-health in children and young people.

With 2.3 million students in the UK at significant risk of developing mental health issues, NHS services have a crucial role to play in ensuring the mental health of the population by tackling issues in care provision head-on.

Research commissioned by the NHS Confederation found current mental health spending would likely need to double to take the number of people with mental health problems receiving NHS treatment from 40% to 70%.

While the mental health sector has been a beneficiary of one-off funding increases for the NHS over the past five years, acute trusts have seen bigger benefits with their incomes growing nearly three times as fast as mental health trusts.

To have true parity of esteem, the mental health sector must be given a bigger proportion of the NHS budget and we hope this will be realised in the details of the funding settlement.

Those responsibilities to our fellow citizens arise at each stage of life, from childhood onwards. There is no stage in the life course where we may neglect adverse influences on the mental health of individuals.

Those influences lie in the social and economic circumstances of life, of education, of physical health and of work. There is no place in society where we do not see opportunities and obligations to minimise such influences. That is the shared view of the many organisations that have made the commitment made in the Concordat. Not only do they recognise their various roles but, importantly, they also declare their agreement to take the actions necessary.

This Concordat has taken root in the West Midlands; in my view it is an example of the kind of commitment that is needed everywhere.

Commissioner Cynthia Joyce, Executive Director of MQ, as well as former Chief Executive of MQ: Transforming Mental Health in the UK: “It has never been clearer that we must change our approach to supporting young lives. Good mental, and physical health requires attention and commitment across government, business and our communities to implement what we know works, and research to discover how we can do even better.”

It is an honour to be presenting this ground-breaking report where our emphasis on prevention and early intervention, if implemented in ways that attend to diversity of experiences, will provide significant leverage to transform mental health outcomes for people as they journey through their life course.

This approach, including coproduction, is particularly vital for those communities where worse mental health outcomes are persistent.

The report was authored by Professor Paul Burstow, Dr Karen Newbigging, Professor Jerry Tew, and Benjamin Costello, all of the University of Birmingham, and was funded by the University’s College of Social Sciences and international mental health research charity MQ: Transforming Mental Health.