White House Lies About Separation of Children from Immigrant Parents 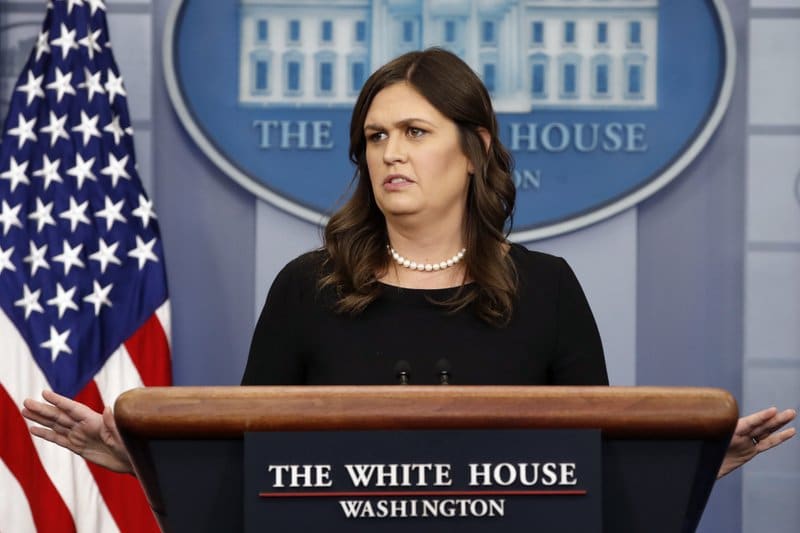 Pushing back growing media scrutiny of the separation of children from undocumented immigrant parents, the White House lied on Thursday about its policy, which now includes the construction of “tent cities” — detention camps — for thousands of juveniles.

On Wednesday, journalists were finally allowed into a center in Texas holding 1,400 boys aged 10-17, prompting one to summarize, ““Effectively, these kids are incarcerated”. Other stories documented children being forcibly taken from parents, in one case a daughter taken from her breast-feeding mother.

At the White House briefing on Thursday, reporters asked Press Secretary Sarah Huckabee Sanders about the situation, in which 500 families have been broken in one area of south Texas alone in the past month. After insulting CNN’s Jim Acosta — “I know it’s hard for you to understand even short sentences” — she lied:

Illegal alien families is the product of the same legal loopholes that Democrats refuse to close. And these laws are the same that have been on the books for over a decade. And the President is simply enforcing them.

There is no law, passed by Democrats and/or Republicans, that mandates the separation of children from parents. In 2014, the Obama Administration issued guidance ending the practice by immigration officials.

Far from “simply enforcing” any existing operations, let alone a law, the Trump Administration instituted the separation policy last month through an order by Attorney General Jeff Sessions. The “zero tolerance” approach followed Trump’s berating of Homeland Security Director Kirstjen Nielsen over an “insecure” border, bringing her to the point of resignation.

Journalists kept returning to, at the least, Sanders’ ignorance of the Administration’s policy, only to get the same response:

Q: They’re with their parents, and then suddenly they’re pulled away from their parents. Why is the government doing this?

SANDERS: Because it’s the law. And that’s what the law states.

SANDERS: You’re right, it doesn’t have to be the law. And the President has actually called on Democrats in Congress to fix those loopholes. The Democrats have failed to come to the table, failed to help this President close these loopholes and fix this problem. We don’t want this to be a problem. The President has tried to address it on a number of occasions. We’ve laid out a proposal. And Democrats simply refuse to do their job and fix the problem.

The Press Secretary did not specify what the “proposal” is. Instead, she restated, “It’s not a policy change to enforce the law.”

One frustrated correspondent, Brian Karem of Playboy, finally pleaded, “Come on, Sarah. You’re a parent. Don’t you have any empathy for what these people are going through?

Sanders did not answer the question. She jabbed, “Hey, Brian, I know you want to get some more TV time, but that’s not what this is about,” and then called on another reporter for a different question.

Earlier in the day, Attorney General Sessions used a different tactic. Rather than denying the policy by disguising it as a Democratic law, he invoked the Bible to justify the separations:

I would cite you to the Apostle Paul and his clear and wise command in Romans 13 to obey the laws of the government because God has ordained the government for his purposes. Orderly and lawful processes are good in themselves. Consistent, fair application of law is in itself a good and moral thing and that protects the weak, it protects the lawful. Our policies that can result in short-term separation of families are not unusual or unjustified.

Relying on the argument that the Trump Administration must be obeyed because God had chosen it — St. Paul’s injunction is “Let every soul be subject to the governing authorities. For there is no authority except from God, and the authorities that exist are appointed by God” — Sessions set aside other scriptures such as Isaiah 10:1:

Woe to those who enact unjust statutes and issue oppressive decrees, 2to deprive the poor of fair treatment and withhold justice from the oppressed.

Before her denial of the Administration’s policy, Sanders faced the question, “Where does it say in the Bible that it’s moral to take children away from their mothers?”

She initially avoided the challenge, “I’m not aware of the Attorney General’s comments or what he would be referencing.” But pressed, “Is it a moral policy, in your view?”, she replied, “I can say that it is very biblical to enforce the law.”