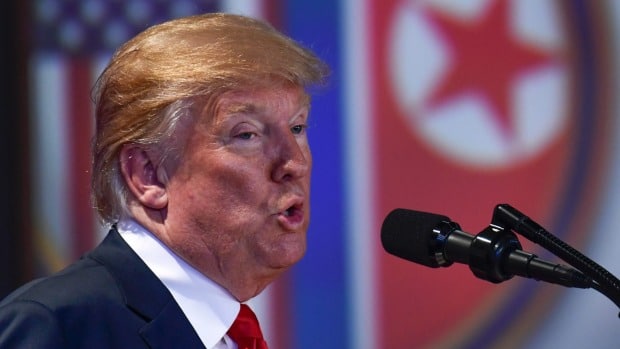 Trump: Kim is our friend, US media is our biggest enemy

Despite a lack of any substantial move by North Korea — and his own off-the-cuff concession — Donald Trump insists that Pyongyang’s nuclear threat is over after his Tuesday historic photo opportunities with Kim Jong-un.

Just landed – a long trip, but everybody can now feel much safer than the day I took office. There is no longer a Nuclear Threat from North Korea. Meeting with Kim Jong Un was an interesting and very positive experience. North Korea has great potential for the future!

Swinging between self-promotion and anger that questions are being raised about the summit’s outcomes, Trump declared, “President Obama said that North Korea was our biggest and most dangerous problem. No longer – sleep well tonight!”. Then he juxtaposed his new friend Kim with his long-time foe:

So funny to watch the Fake News, especially NBC and CNN. They are fighting hard to downplay the deal with North Korea. 500 days ago they would have “begged” for this deal-looked like war would break out. Our Country’s biggest enemy is the Fake News so easily promulgated by fools!

Trump tried to wish away the reality that, in the summit’s high-profile document, the commitment to “work towards complete denuclearization of the Korean Peninsula” merely repeats North Korea’s words from 1994 when talks on an Agreed Framework began with the Clinton Administration.

He also sought to defend his announcement — apparently impromptu, without consulting the US or South Korean militaries — that Washington will end joint military exercises with Seoul which have been held for decades. Doing so, he again used North Korea’s label for the exercises:

We save a fortune by not doing war games, as long as we are negotiating in good faith – which both sides are!

North Korean State media, in enthusiatic proclamation of a summit where Pyongyang and the US were equals, framed “denuclearization” as a step-by-step process in which the US must make commitments at each stage such as security guarantees, a drawdown of American forces on the Korean Peninsula, and an end to economic sanctions. The tightly-controlled reports emphasized that Trump was committed to lifting the sanctions as relations improved.

Bruce Klingner, a Korea specialist at the Heritage Foundation and a former CIA analyst, summarized, “[The document] is weaker than its predecessors. It’s a first step, but it’s a stumble more than a step. It’s not worth the hype that’s being accrued to it.”

Here's the president of the United States saluting a uniformed officer of the Korean People's Army, dutifully captured on tape by a Korean Central Television cameraman for broadcast in North Korea. #TrumpKim pic.twitter.com/crBTx5e5cL

Secretary of State Mike Pompeo, in Seoul to brief South Korean officials, said he expected to “begin the engagement” with North Korea within the next week. He expressed hope for completion of the “major disarmament” of North Korea before the end of the Trump Administration’s first term in January 2021.

But Pompeo bristled when faced with questions about the substance of the summit, in light of Trump’s declaration that no preparations were needed because he could “feel” and “touch” Kim within the first minute to ascertain intentions.

QUESTION: Mr. Secretary, I wanted to ask you about “verifiable and irreversible” [denuclearization].

[Editor’s Note: There is no mention of “verifiable” and/or “irreversible” in the Trump-Kim document.]

QUESTION: How is it in the statement? And I am also —

SECRETARY POMPEO: You’re just — because “complete” encompasses verifiable and irreversible. It just — I suppose we — you could argue semantics, but let me assure you that it’s in the document.

QUESTION: And the president said it will be verified.

SECRETARY POMPEO: Of course it will.

QUESTION: Can you tell us a little bit more about —

SECRETARY POMPEO: Of course it will. I mean —

QUESTION: — what is — what discussed about how?

SECRETARY POMPEO: Just so you know, you could ask me this — I find that question insulting and ridiculous and, frankly, ludicrous. I just have to be honest with you. It’s a game and one ought not play games with serious matters like this.

QUESTION: But how will it be verified? Did you discuss that? Do you have —

SECRETARY POMPEO: It’s unhelpful for your readers, your listeners, for the world. It’s — because it doesn’t remotely reflect the American position or the understandings that the North Koreans have either.

QUESTION: We’re just trying to understand how it reflects what you asked that —

SECRETARY POMPEO: Yeah, and I just articulated that for you.

Pompeo insisted, “Not all of [our] work appeared in the final document, but [there were] lots of other places where there were understandings reached. We couldn’t reduce them to writing, so that means there’s still some work to do, but there was a great deal of work done that is beyond what was seen in the final document.”

In his latest lie, Donald Trump has said that parents of US soldiers killed in the Korean War asked him on the campaign trail in 2016 to bring their sons home.

The agreement to return bodies of POWs and MIAs from the 1950-1953 war was one of the four points in Monday’s Trump-Kim document.

Trump tells Fox that parents of soldiers killed in the Korean War asked him on the campaign trail to bring their sons home. (Absolute minimum age of such a parents is 101 years old. Probable age 110 to 120.) pic.twitter.com/coIjMAekrg

Meanwhile, Trump continued to push away any scrutiny of North Korea and Kim over human rights:

Trump responded by calling Kim "tough" and "very smart," and then said:
"A lot of other people have done some really bad things." pic.twitter.com/ZLQMnT4FwX

Ronna McDaniel, the chairwoman of the Republican Party, backs up Donald Trump’s attacks on the media and extends the warning to everyone else in the US:

Complacency is our enemy. Anyone that does not embrace the @realDonaldTrump agenda of making America great again will be making a mistake.