Can Colombia’s Reconciliation Deal with Revelations of “Cash for Kills”? 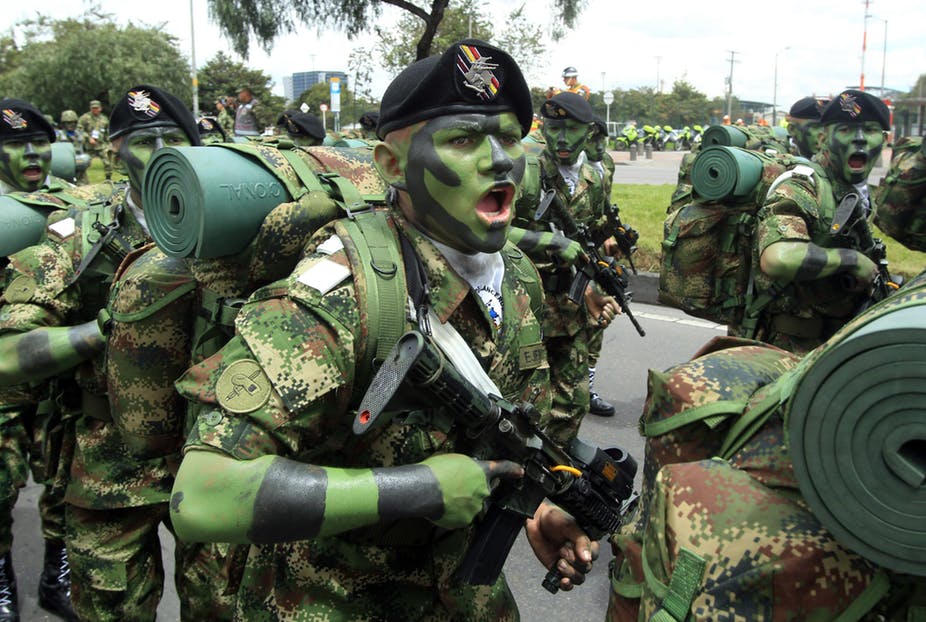 Colombia recognizes that grave crimes threaten global security — but can it deal with them?

As Colombia continues to pursue a post-conflict process after decades of turmoil, Seb Eskauriatza of the University of Birmingham writes for The Conversation:

Of all the horrors to emerge from Colombia’s five-decades long conflict with the guerilla forces of the FARC-EP, the so-called false positives scandal is one of the most notorious.

Between 2002 and 2010, members of the Colombian military used promises of employment to lure, kidnap and murder thousands of vulnerable young men before presenting their deaths as “combat kills”, for which they were remunerated by the government. According to evidence presented in the perpetrators’ trials, they transported their victims hundreds of miles into the jungle and dressed them in FARC-EP uniforms, then photographed their corpses and presented the pictures as evidence for payment.

Now, a book by a former Colombian police colonel, Rojas Bolaños, has alleged that the practice was far more widespread and systematic than first imagined, and that approximately 10,000 civilians were murdered by Colombian military forces.

That staggering number raises difficult questions about the future of Colombia’s already struggling post-conflict justice process. In a way, 10,000 represents the crossing of a sort of psychological threshold – it is hard to ignore. But Colombia has also been far too slow in delivering justice for crimes committed in its decades-long conflict – and that raises the possibility of an intervention by the International Criminal Court.

Colombia has been under “preliminary examination” by the ICC since June 2004. So far, the court has gathered evidence, received reports by advocacy groups, produced interim reports, and conducted visits to Colombia in 2013, 2015 and 2017. But since Colombia has not yet been formally recognised as a “situation” by the ICC, no official investigations have begun, no arrest warrants prepared, and no hearings scheduled.

Many people both inside and outside Colombia think it’s time for the ICC to take the next step and declare the state “unwilling or unable” to carry out genuine prosecutions of those most responsible for these crimes. The ICC has jurisdiction over crimes against humanity committed by Colombian nationals or on the territory of Colombia since November 1, 2002 – a timeframe that would include the majority of “false positive” murders. But the mere fact the ICC can intervene in Colombia doesn’t mean it will, or indeed that it should.

After a visit to Colombia in September 2017, the ICC Prosecutor Fatou Bensouda insisted that she was “impressed by the commitment, invaluable experience and high standards of Colombian courts”. She also said the courts were determined “to ensure genuine accountability for the most serious crimes and respect for the rights of victims”.

This hardly sounds like a prosecutor preparing to intervene. Perhaps that’s to be expected; the ICC is designed to be a court of last resort. It’s quite likely that Colombia will be given more time to bring those responsible to justice, especially since the country’s new transitional justice system has only recently opened its doors.

That system, known as the Special Jurisdiction for Peace, was agreed by the negotiating parties to the 2016 peace deal. A complex system of accountability, it is founded on exchanging the full confessions of those most responsible for international crimes for “limited sanctions”, meaning up to eight years of restricted liberty and enforced community service. Those who do not confess in full can be put on trial and potentially sentenced to up to 20 years in prison.

This setup has proved very controversial among Colombians. It was in fact rejected by a slim majority in a 2016 referendum, and ultimately implemented without being put to another popular vote. The FARC-EP is now a political party, but in recent legislative elections, it received only 0.34% of the total vote.

Much could depend on the winner of this year’s presidential elections, the outcome of which is set to be declared on June 17. One of the strongest runners is Iván Duque, a staunch right-wing critic of the peace deal; he is supported by an ex-president, Álvaro Uribe, who worked hard to mobilise “No” voters in the 2016 plebiscite.

At minimum, assuming there’s a second round run-off, Duque will almost certainly be one of the two candidates fighting it. If he commits to unravelling the peace deal, then the resulting impunity may mean that an ICC intervention becomes inevitable. Without a credible and genuine attempt to bring those most responsible for international crimes to justice, Colombia will be in breach of its international obligations under the Rome Statute and calls for an ICC intervention will only get louder.

Whoever the next president of Colombia is, they would do well to remember Colombia’s international obligations. As the ICC’s Bensouda herself affirmed after the peace deal was struck:

As a state party to the Rome Statute of the International Criminal Court, Colombia has recognised that grave crimes threaten the peace, security and well-being of the world and stated its determination to put an end to impunity for the perpetrators and thus contribute to the prevention of such crimes.

That’s not a small task, but the peace process was deliberately set up to take it on. Whether Colombia will be willing and/or able to follow through is another matter.