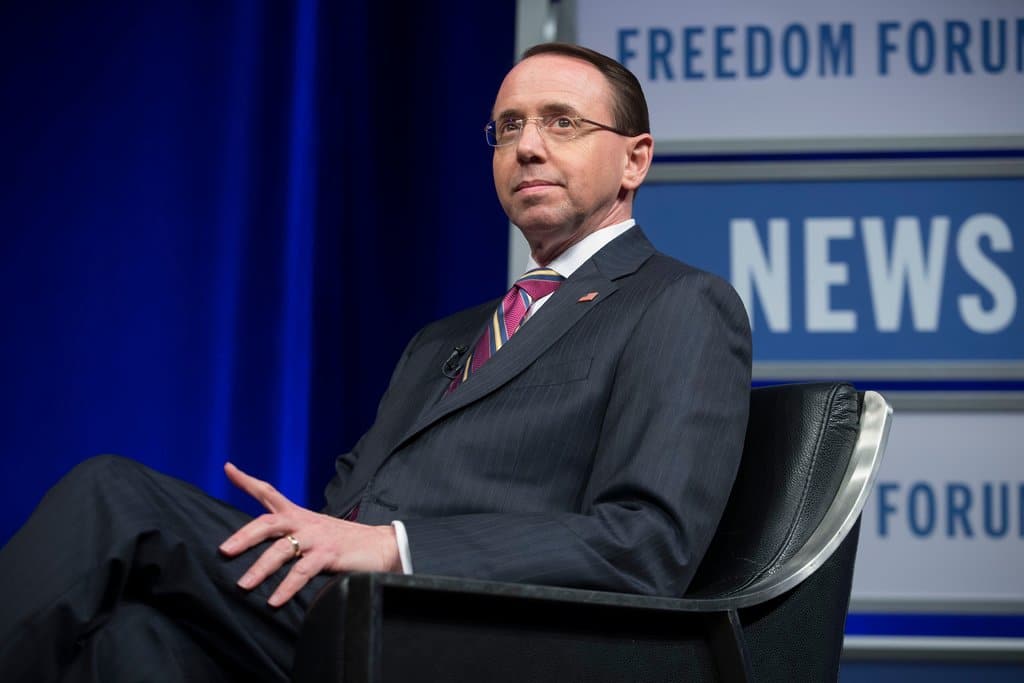 Deputy Attorney General (pictured): Justice Department “is not going to be extorted”

Developments on Day 467 of the Trump Administration:

See also How Far Did Trump Go to Cover Up State of His Health?

Rosenstein Responds to Threat of His Impeachment

Deputy Attorney General Rod Rosenstein pointedly responds to a group of House Republicans threatening to remove him to curb or even halt the Trump-Russia investigation.

On Monday, The Washington Post revealed that the conservative Freedom Caucus — led by Trump confidant Mark Meadows of North Carolina — had drafted articles of impeachment against Rosenstein. Meadows acknowledged the document, saying that it was a “last resort” if the Justice Department did not provide more information about the inquiry.

Rosenstein told reporters on Tuesday, “There have been people who have been making threats, privately and publicly, against me for quite some time. And I think they should understand by now, the Department of Justice is not going to be extorted.”

He said he would not respond to the draft articles, which “no one has the courage to put their name on”, comparing it with the process used by the Justice Department:

If we’re going to accuse somebody of wrongdoing, we have to have admissible evidence and credible witnesses. We need to prepare to prove our case in court. And we have to affix our signature to the charging document.

Meadows refused to back off yesterday, “If he believes being asked to do his job is ‘extortion’, then Rod Rosenstein should step aside and allow us to find a new Deputy Attorney General — preferably one who is interested in transparency.”

Trump and his allies in Congress and the media have tried for months to undermine the FBI, Justice Department, and Special Counsel Mueller. But the effort has taken on urgency with news that Mueller is now seeking to interview Trump about issues including his campaign’s links with Russian officials, his business affairs, and possible obstruction of justice.

On Monday, The New York Times revealed a list of almost 50 open-ended questions that Mueller’s team has prepared, such as “What knowledge did you have of any outreach by your campaign, including by [campaign manager] Paul Manafort, to Russia?”

While Rosenstein has cooperated with legislators to allow them to review confidential FBI memoranda on the investigation of the Trump campaign, he angered Trump by personally approving an FBI raid of the home, office, and hotel of Trump’s personal attorney Michael Cohen on April 9.

Trump then threatened to remove Rosenstein and Mueller before the Dpeuty Attorney General assured him on April 12 that Trump — for now — is not a target of the investigation.

Dowd said Tuesday that Mueller’s team broached the subject in March during a meeting with Trump’s legal team.

The lawyer resigned on March 22, reportedly amid divisions within Trump’s legal team and Trump’s insistence that he is “100%” to answer questions

To Get US Missiles, Ukraine Halts Cooperation with Mueller Investigation

Hoping to obtain US anti-tank Javelin missiles, Ukraine has halted cooperation with the investigation of Special Counsel Robert Mueller.

Muelleri is pursuing cases that involve Manafort, former Trump campaign manager, which have arisen from the investigation of Russia’s involvement in the 2016 election. Manafort was indicted last October on money laundering and financial fraud charges.

The State Department issued an export license for the missiles on December 22, and the Pentagon announced final approval for the sale of 210 Javelins and 35 launching units on March 2. The order by Ukraine’s chief prosecutor to halt four investigations into Manafort was issued in early April.

In every possible way, we will avoid irritating the top American officials. We shouldn’t spoil relations with the administration.

The Ukrainian investigators had been tracing money paid to Manafort and a New York law firm by figures in the pro-Russian political party of Viktor Yanukovych, the President forced out by demonstrations in 2014. Manafort was a longtime advisor to Yanukovych, helping him win the Presidency in 2010.

Ukrainian authorities have also allowed a potential key witness to possible collusion between the Trump campaign and Moscow to leave for Russia.