The Pro-Assad Outlets Behind US Politician Kucinich’s Syria Appearances 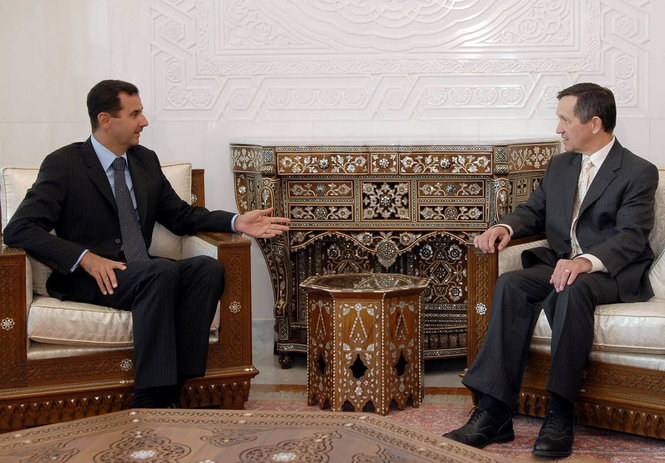 On April 4, 2017, the same day dozens of civilians suffocated to death in a sarin gas attack carried out by the regime of Syrian president Bashar al-Assad in the town of Khan Sheikhoun, former US Representative and current Ohio Governor candidate Dennis Kucinich boarded a plane and flew to Britain to speak at a two-day conference attended by two Syrian government officials. The event was organized by the European Centre for the Study of Extremism (EuroCSE) — an organization described by multiple Syrian organizations in Britain as existing “primarily to spread propaganda for the Assad dictatorship”.

After yet another deadly attack in Syria on April 7, 2018, in which the Assad regime has again been accused of killing scores of civilians with chemical weapons in the city of Douma, Kucinich’s trip and its funding source — along with multiple visits to Syria and meetings with Assad — are now a point of scrutiny for the candidate who is seeking the Democratic Party nomination for the November 2018 Ohio gubernatorial election.

In statements to reporters, Kucinich and his campaign said he is not pro-Assad but is instead pro-peace, and that the conference “was to bring peace and reconciliation to Syria, not to support the current regime”.

But many say Kucinich’s trips to Syria and others like it made by American and European political figures, where they frequently meet with Assad, do nothing but provide an appearance of legitimacy for a regime that according to the United Nations has committed “crimes against humanity of extermination, murder, rape or other forms of sexual violence, torture, imprisonment, enforced disappearance and other inhuman acts” over the past several years.

Leila Al-Shami, writer and co-author of the book Burning Country: Syrians in Revolution and War, told us the regime promotes such visits favorably in the Syrian news media, because they provide cover for war crimes:

Those who visit and then promote regime narratives are legitimizing the regime, they are white-washing Assad and often spreading conspiracies or engaging in atrocity denial. Often these people may be fringe figures, sometimes they will be ‘respectable’ politicians, but they all contribute to a campaign of disinformation and support for a brutal dictator. They have contributed to a climate of uncertainty among the general public which has made all attempts at practical solidarity with Syrians suffering oppression and war virtually impossible.

On April 17, 2018, Kucinich was pressured by his political rivals to reveal that he was paid $20,000 to speak at the EuroCSE conference by an umbrella nonprofit on behalf of the Syria Solidarity Movement, a California-based organization that opposes US-led regime change in Syria and shares regime propaganda and conspiratorial stories on its web site. These include unfounded claims that reputable human rights organizations like Amnesty International, Médecins Sans Frontières‎, and Human Rights Watch, along with multiple Syrian organizations including the volunteer rescue group known popularly as the White Helmets, are “front” organizations for a nefarious conspiracy to bring down the Assad regime through so-called false flag attacks.