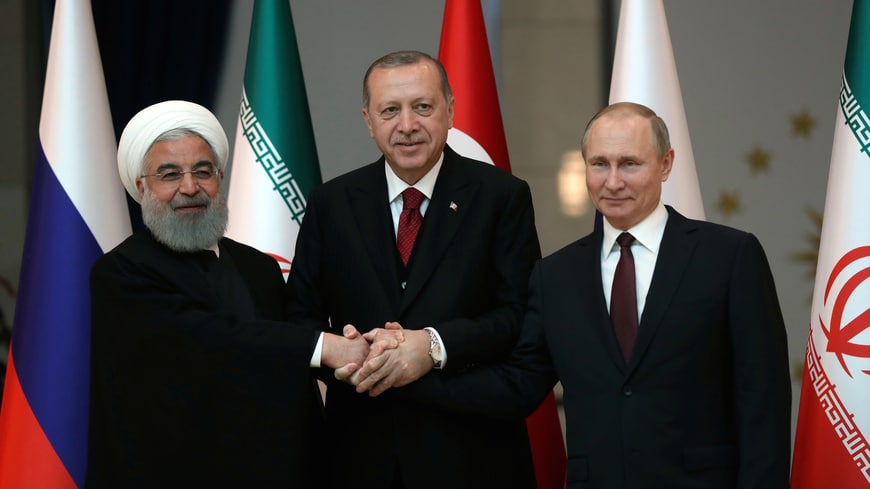 There was a lull in pro-Assad attacks on civilian areas in Syria on Thursday, a day after Russia and Iran — essential allies of the Assad regime — joined Turkey in a call for “calm on the ground”.

The Syrian Network for Human Rights reported only three fatalities across the country yesterday, the lowest total this year amid pro-Assad offensives and mass killing of civilians — enabled by Russian airstrikes — both in northwest Syria and on East Ghouta near Damascus.

With pro-Assad forces having reoccupied almost of East Ghouta, with only the town of Douma holding out, focus is now on whether offensives will resume against other opposition areas such as Idlib and northern Hama Provinces in the northwest and on Daraa — where the Syrian uprising began in March 2011 — in the south.

During the winter, pro-Assad units, supported by Russian aerial operations, re-entered Idlib Province — almost all of which has been held by the opposition since 2015 — and claimed part of the southeast. At the end of January, the offensive was halted as troops redeployed to East Ghouta. Since then Turkish forces, who have allied with rebels to take part of the northwest from Kurdish militia, have been establishing a ring of observation posts around Idlib and northern Hama Provinces.

Despite that line, Russia and regime warplanes have continued to attack civilian areas inside the provinces. Earlier this week, scores of people were killed and wounded before Thursday’s apparent pause.

The roots of a possible partition go back to August 2016, when Turkish President Recep Tayyip Erdoğan and Russian counterpart Vladimir Putin reconciled in a meeting in Moscow. Ankara accepted the Russian-Iranian-regime siege and mass killing in eastern Aleppo city as they reclaimed it in December 2016, while Moscow assented to Turkey’s military intervention in the northwest alongside rebel forces.

Despite public declarations by Turkey, Russia, and Iran of “de-escalation zones” across the country, Turkey acceded to the ongoing pro-Assad assaults outside the northwest — notably the East Ghouta operation which has killed more than 1,700 people in the past two months — and has not checked the Russian-regime bombing of civilian areas.

Iran has publicly objected to any acceptance of any opposition area, including in the northwest, and the Assad regime has pledged to overrun not only opposition territory but also Kurdish-held positions such as the city of Raqqa in northern Syria.