On Syria, Academic Freedom, and Responsibility 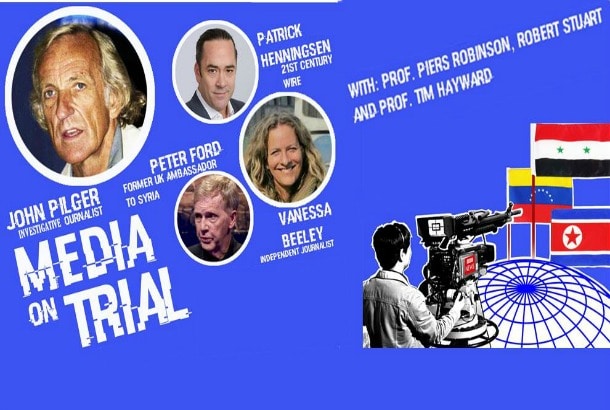 “The duty of intellectuals should be to ensure accountability, not to engage in frivolous revisionism”

Last week I noticed how a UK academic had loudly invoked “academic freedom” to justify his dissemination of pro-Assad and pro-Russia propaganda and disinformation, going to the lengths of writing an open letter to a student to defend himself.

I had been planning to write a response: “You are free to say, write, and promote whatever you want, no matter how damaging this might be to analysis, dialogue, and the recognition of Syrians. But this is not the same as academic responsibility, with regard to information and engagement with students and the general public.”

This morning Muhammad Idrees Ahmad of Stirling University has beat me to the punch, in an article for Open Democracy:

In February 2016, when the siege of Aleppo was heading toward a murderous denouement, former journalist Stephen Kinzer wrote a strong denunciation of western media that went viral. Among other things, Kinzer blasted the media for failing to report “from the ground” and for overlooking the fact that in Russia and the regime’s assault, Aleppo residents were “finally see[ing] glimmers of hope”. Kinzer’s curious indictment was based entirely on two sources: an anonymous Aleppo resident “on social media” and “Beirut-based analyst Marwa Osma”[sic] (he meant Marwa Osman, a blogger for the Iranian Supreme Leader’s personal website). Kinzer’s previous article was titled: “On Syria: Thank you, Russia!”.

It is entirely appropriate then that Philip Hammond should cite Kinzer in defence of his Orwellian “Working Group on Syria, Propaganda and Media” (SPM). They share the same modus operandi: they treat opinions as facts and resist empirical evidence. They assert their scepticism of the “dominant official narrative” while credulously parroting the Kremlin’s official line. And by framing the debate in populist terms—dissidents versus “the media”, sceptics versus “the establishment” — they embrace a worldview where a consensus among various international media, human rights organizations, multilateral institutions, war crimes investigators, and the people affected becomes proof that there’s a vast international conspiracy to malign Bashar al-Assad and Vladimir Putin.

One can of course dismiss this as a somewhat eccentric attempt by generalists to divert themselves by bumbling around a subject they little understand (SPM doesn’t have a single Syrian, Syria scholar, or Middle East-North Africa specialist). But the operation becomes malicious when its principals start combining overt sympathy for the regime and casual denialism with an assault on academic freedom.

In line with the upside down logic of his collaborators, Hammond paints a picture of SPM as a dissident faction under assault from a “partisan” media eager to revoke their “academic freedom”.

“Every Freedom Comes with Responsibilities”

This picture is self-serving and false. Long before The Times discovered Hammond’s group, its activities had already caught the attention of the former Guardian editor Brian Whittaker. And three months before The Times published its story, SPM had initiated an assault on academic freedom by sending an official complaint to my university on Sheffield University letterhead. They were upset that in a Twitter exchange I had referred to some of their work as “illiterate, Islamophobic drivel” (a judgment I stand by). Tim Hayward, a founder of the group, had also made an official complaint to Edinburgh University against a Lebanese PhD student whose views he found inconvenient (bear in mind that these are senior white academics targeting junior scholars from Middle Eastern/Muslim backgrounds).

As an academic, Hammond should know that targeting people’s institutions to try to constrain them in public debates is insidious. Conversely, he should also know that when we say something indefensible in the public, we can’t expect our academic positions to shield us from public scrutiny.

Every freedom comes with associated responsibilities. No academic has a right to pollute public discourse with deliberate falsehoods without risking opprobrium. Ideas have consequences, and intellectuals, like all citizens, bear the responsibility for their words and deeds. The Time is correct in noting that instead of legitimate academic inquiry, SPM is engaged in obfuscation and sophistry. Their work does not engage with facts; it simply amplifies slanderous opinions by various Kremlin-friendly commentators. Their most frequent references are not to credible sources but various fringe figures including social media personalities, retired soap stars, starstruck socialites and sojourning pensioners.

SPM lionizes Vanessa Beeley, the venerated high priestess of truther cosmology, who cites her selfie with Bashar al Assad as her “proudest moment”; Eva Bartlett, another common reference, wears an “I ♥ Bashar” bracelet. SPM principals refer to both as “independent journalists” (Piers Robinson has suggested that The Guardian could become more “ethical, independent and glamorous” by hiring the two). Another trusted source is former Bolivian soap star Carla Ortiz, a frequent guest of the regime.

To quote Brian Whitaker, SPM is “more like a propaganda exercise than a serious academic project”. A group that is sceptical of everyone from Amnesty International, Medecins Sans Frontieres, Channel 4, BBC, The Guardian, the UN and the Organization for the Prohibtion of Chemical Weapons suspends critical judgment when it comes to sources like Russia Today, Sputnik, or 21stCenturyWire (a conspiracy site set up by the former editor of alt-right shock-jock Alex Jones’s “InfoWars”). They profess to be critical of western “official claims” but encourage followers to get the truth from Bashar al Assad and the Russian Ambassador.

All of this would be comical if it weren’t so pernicious. Tim Hayward, the co-founder of SPM, has mocked the survivors of the April 2017 chemical attack (he later deleted the Tweet after it was quoted in The Times story). Piers Robinson, has repeatedly promoted a radio interview with Vanessa Beeley in which she calls the Syrian White Helmets legitimate targets for killing (a war crime in international law). The group has also weaponized Islamophobia to smear critics of the regime. They have slandered the White Helmets and the Syrian American Medical Society (SAMS) as “Al Qa’eda”. (As a proud supporter of both organisations, I was accused of “support[ing] Al Qaeda” by SPM’s Tara McCormack.) Beeley, with whom the group founders frequently tour, considers Britain a “police state” but encourages her followers to report me, George Monbiot, Professor Scott Lucas, The Guardian, Channel 4, and the BBC to authorities under the Terrorism Act of 2000. 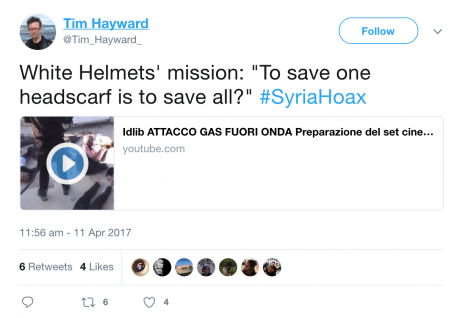 These things have real-life consequences. The UN, Amnesty International, Human Rights Watch, and Medecins Sans Frontieres have all found a pattern of attacks on rescue workers and medics suggesting a deliberate attempt by Russia and the regime to target them. SPM is serving up rationales for such targeting. They also use the common conspiratorial trope of “just asking questions” to manufacture doubt, to surround established facts with baseless speculation so that truth gets lost in the swirl of competing claims. They use the formof truth-seeking to obscure truth. The style should be familiar from the so-called “9/11 truth movement”: use any improbable explanation to avoid acknowledging the obvious.

Syria is the most documented war in history and there is a vast body of evidence covering every aspect of the conflict. The picture is not equivocal. To quote the UN Commission of Inquiry the regime is responsible for “the crimes against humanity of extermination; murder; rape or other forms of sexual violence; torture; imprisonment; enforced disappearance and other inhuman acts”. These facts are not in doubt. The duty of intellectuals should be to ensure accountability, not to engage in frivolous revisionism.