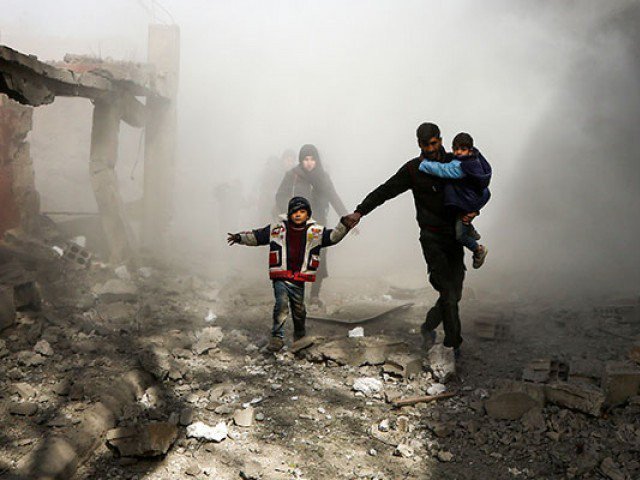 Father of victim: “What happened today in East Ghouta is genocide in all its facets”

UPDATE 1025 GMT: The UN has confirmed that half of the aid on a convoy for East Ghouta could not be delivered on Monday because of shelling by pro-Assad forces.

A statement from the Secretary General’s office cited “insecurity”. It also noted that regime forces had stripped most medical supplies from the 46 trucks, nine of which remained “sealed shut” and five were only partially unloaded amid the attacks on Douma.

The pro-Assad attacks killed at least 85 people across East Ghouta on Monday.

The delivery was only the third allowed by the Assad regime since last summer, as it hopes a tightening five-year siege will break resistance in the area near Damascus.

Turkey is setting up camps to another 170,000 people in northwest Syria, amid signs that many of East Ghouta’s residents will be forcibly displaced.

“The Turkish Red Crescent and AFAD (Disaster and Emergency Management Authority) started preparations to set up camps to host 170,000 people near Idlib [Province] and the areas of [the] Euphrates Shield Operation,” Foreign Ministry spokesman Hami Aksoy said on Tuesday.

Turkish President Recep Tayyip Erdoğan and Russian counterpart Vladimir Putin spoke by phone about the East Ghouta situation late Tuesday. Erdoğan’s office did not refer to the Idlib camp but said the two men agreed that the delivery of humanitarian aid to civilians and ending the “disaster” is “essential”.

Turkish military intervention from August 2016 has helped ensured an opposition-held area across most of Idlib Province and northern Aleppo Province, despite attempts by pro-Assad forces to take over the area.

Meanwhile, a pro-Assad offensive has captured about one-third of East Ghouta, near Syria’s capital Damascus, with regime and Russian attacks killing about 1,100 people and wounding thousands in the past month.

On Tuesday, the residents of Hamouriya signed a surrender deal. Talks are ongoing for the capitulation of Misraba.

The Russian Defense Ministry said rebels and their families can have safe passage out of East Ghouta: “The Russian Reconciliation Centre guarantees the immunity of all rebel fighters who take the decision to leave eastern Ghouta with personal weapons and together with their families.”

The arrangements echo the capitulation and forced displacement from eastern Aleppo city in December 2016. Pro-Assad forces, enabled by Russian airstrikes, took over the area after a five-month siege and bombardment that caused thousands of casualties and forcibly displaced about 50,000 people.

Inside East Ghouta those who remain are mourning the victims of the mass killing.

Nazir Al-Midani, the father of 9-year-old Hala, recalled how he could not save her despite building a bunker: “My daughter Hala died here. This is where she took her last breath. I hid her below ground but this is where she suffocated.”

My message to everyone is, what happened today in East Ghouta is genocide in all its facets. Everyone has betrayed us. Everyone is watching how we are dying and no one is intervening. If you don’t do anything about it, then all of you are violating international law and supporting our annihilation. 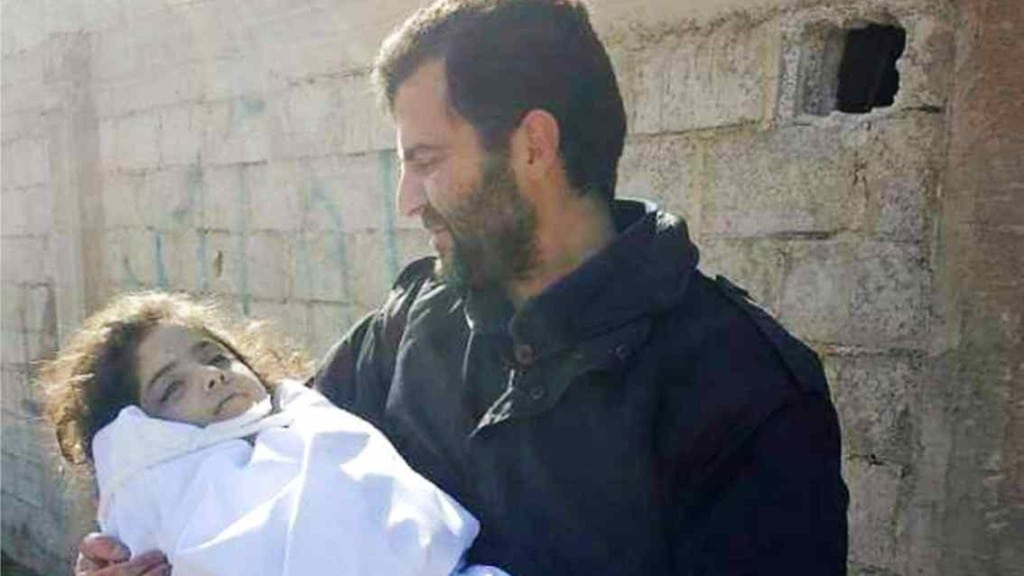 A boy in East Ghouta mourns his younger brother: 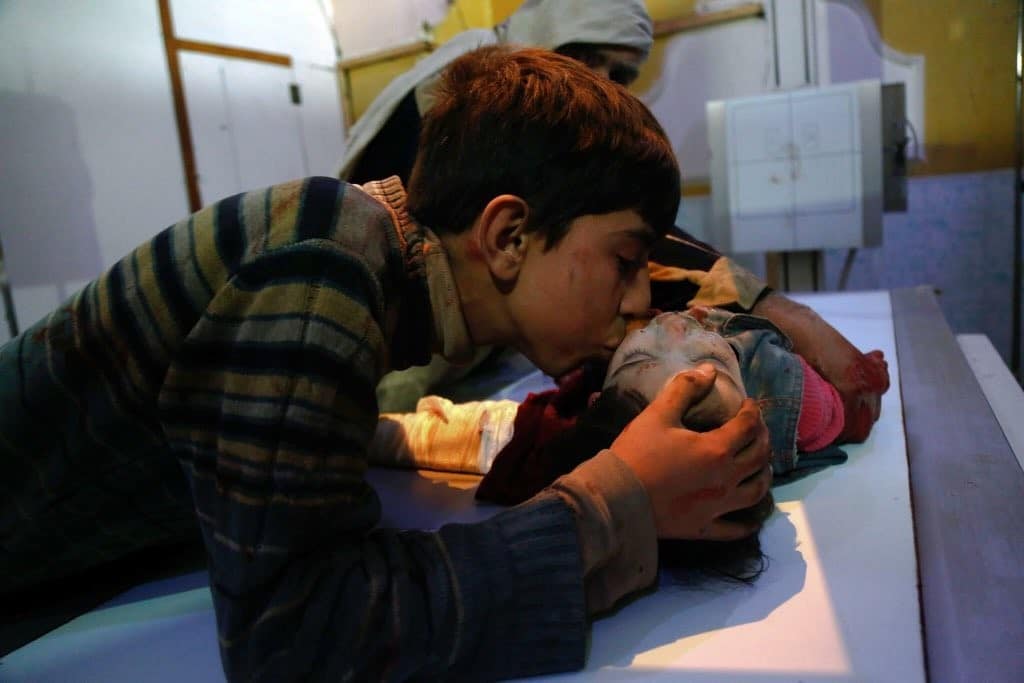 “Gas Attack” on Surrendered Hamouriya Was Fumes from Explosives

As the residents of Hamouriya surrendered, the opposition’s Health Directorate said a Monday “gas attack” was actually fumes from high-potency explosives.

Thirty people suffered effects from the fumes, with 17 treated in medical facilities. At least 23 people were killed in Hamouriya by the bombardment.

The UN team investigating possible war crimes in Syria has linked Russia for the first time, concluding that a Russian warplane carried out a bombing in November which killed at least 84 people and wounded more than 150.

The bombing was part of a Russian-regime assault on opposition-held Idlib Province and western Aleppo Province, seeking to support a pro-Assad ground offensive. The strike was on the town of Atareb, west of Aleppo city.

The UN panel said the bombings may not have specifically targeted civilians, but it ruled that the use of unguided blast bombs in a densely-populated area could amount to a war crime.

The panel cited evidence from early-warning observers in Syria, who tracked the warplane from Russia’s Hmeimim airbase in western Syria to Atarib, where the market was crowded with people who had left work.

See Bellingcat’s investigation of the bombing

The Russian mission to the UN did not immediately respond to the findings.

The panel also rejected the US-led coalition’s account o airstrikes last March on a school building in Raqqa Province, which investigators said killed at least 150 of the 200 civilians sheltered after fleeing fighting elsewhere.

The panel found no evidence to support the coalition’s claim that the school was occupied by Islamic State fighters.

The coalition attack did not amount to a war crime because there was no intention of hitting a civilian target, but had violated international law by failing to take adequate precautions, the panel concluded.

The international coalition also inflicted countless civilian casualties in daily airstrikes on ISIS fighters in Raqqa city, attacking even though civilians were being used as human shields.

The panel will present its findings to the UN Human Rights Council in Geneva next week.

The Syrian Democratic Forces said Tuesday that it is moving fighters from eastern Syria to the Kurdish canton of Afrin in the northwest, under attack by a Turkish-rebel offensive:

zWe regretfully make the decision today…to move our fighters from their battlefront positions against Daesh [Islamic State] terrorists in the Deir e-Zor countryside and send them to the Afrin fronts to confront the vicious Turkish aggression.

We never imagined it would come to this.

The SDF, led by the Kurdish militia YPG, was created in October 2015 to fight ISIS. It has been the main recipient of US support in Syria since then.

The Turkish-rebel ground offensive on Afrin, supported by shelling, has taken all of northwest Syria along the border and some of the canton’s town, such as Raju. The frontline is now 12 km (7.5 miles) from Afrin city.

Turkish Presidential Spokesman İbrahim Kalin said on Wednesday that Ankara expects the US to stop the “shifting” of the SDF:

In this regard, we have taken the necessary steps via official channels and we will continue to take [such steps]. In particular, it is expected that the US must certainly step in and halt the shifting of YPG/PYD forces, which are moving under its control, from Manbij to Afrin. This is our natural right.

High-ranking officers are among 39 Russian troops and crew killed in the crash of a transport near the Hmeimim base in western Syria on Tuesday.