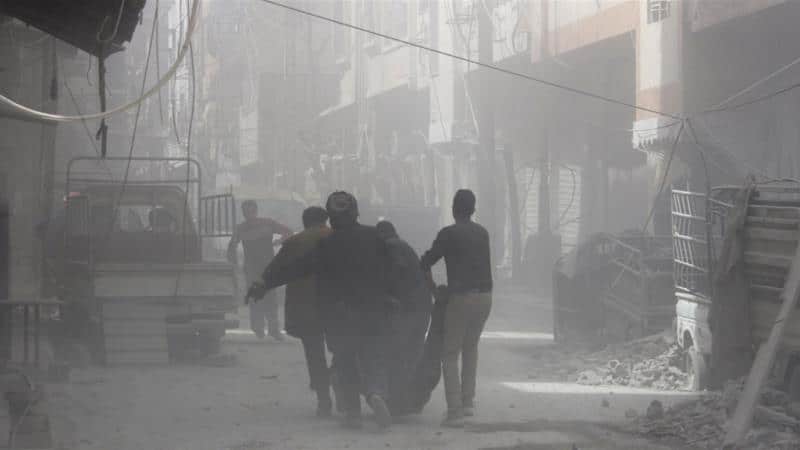 Bunker-busters and incendiary munitions used by Russia on town of Erbin, killing children and women

UPDATE 1015 GMT: Covering the displacement of people in East Ghouta by its attacks alongside those of pro-Assad forces, Russia has proclaimed another “humanitarian corridor” for civilians to return to territory now held by pro-Assad forces.

“The third humanitarian corridor has started operating in Eastern Ghouta….Civilians return to liberated settlements of Saqba and Kafr Batna, humanitarian aid is delivered there,” the Russian “Center for Reconciliation” said in a statement.

Many of the civilians who fled Efrin to regime areas want to return to their city but are being prevented from doing so by Assad regime forces manning checkpoints. Previously, the same checkpoints demanded huge bribes for those wanting to leave Efrin.

At least 56 people were killed on Tuesday in East Ghouta, near Syria’s capital Damascus, in the latest attacks by the Assad regime, its foreign allies, and Russian warplanes.

The toll reversed a 48-hour decrease in casualties, indicating that pro-Assad forces will press their assault despite a Russia-proclaimed agreement for surrender talks in Douma, the center of the opposition enclave, and claims of an arrangement for rebels and their families to leave Harasta.

The escalation started Monday night when at least 16 children and four women were reportedly killed in the bombing of a school being used as an underground shelter in Erbin. Local sources say a Russian warplane used a “bunker-buster” bomb to penetrate three floors before striking the basement.

Hard to put into words the current situation in eastern Ghouta. Those who think that it can't possibly get worse are proven wrong.
In addition to chlorine gas, incendiary & ordinary bombs dropped by the regime & Russia, the Russian air force has now started using bunker-busters

About 1,600 people have been killed and thousands injured since the pro-Assad offensive to take East Ghouta, besieged for more than five years, began in early February. Reports say the Assad regime and its allies, enabled by the Russian bombing, have claimed about 70% of the enclave, but more than 300,000 people are estimated to remain in the opposition area. Tens of thousands are living in basements, hoping to avoid death.

The UN human rights chief, Zeid Ra’ad al-Hussein said on Monday that the offensive and siege have have “involved pervasive war crimes”, with the “use of chemical weaponry, enforced starvation as a weapon of warfare, and the denial of essential and lifesaving aid, culminating in the current, relentless, month-long bombardment”.

If there is hell on earth, it is in #EasternGhouta. Daily life has escalated to nightmare proportions where civilians wonder not if they will die but when. Martyrs, wounded, fires, thick smoke, mortar shells, and death are everywhere. #SaveGhouta #Syria 20 Mar #actforghoutanow pic.twitter.com/vepz4itrUn

Syrian State media said on Tuesday that at least 35 people were killed by rocketing of a Damascus suburb.

A police source, blaming East Ghouta rebels, said the attack was on a market Jaramana, southeast of the capital.

There was no independent confirmation of the source of the rocketing.

A Deal for Rebels to Leave Harasta?

Two opposition sources said fighters of the rebel faction Ahrar al-Sham have agreed to leave Harasta, one of the last remaining opposition-held towns in East Ghouta, in a deal with Russia.

The sources said the fighters will lay down their arm in return either for safe passage to other opposition areas or for pardons for those who stay under a capitulation agreement.

“The deal has been finalised and it could come into effect soon after a ceasefire is announced as early as Wednesday,” said “one official familiar with the talks”, which have been conducted for several days. He said it will begin with the evacuation of wounded civilians after residents had endured “untold suffering” from the pro-Assad assault.

But one source said obstacles may delay implementation for a few days.

Did Russian Hacking of Surgeon Lead to Bombing of Aleppo Hospital?

A British surgeon says Russian hacking of his mobile phone may have led to Moscow’s bombing of an Aleppo hospital in 2016.

In an unprecedented arrangement, David Nott gave remote instructions via Skype and WhatsApp from the UK to allow
doctors to carry out surgery in an underground hospital. However, after the BBC featured the cooperation, Nott believes hackers targeted his computer.

Nott suspended the cooperation and the Red Cross is now meeting with staff over the dangers of hacking.

The thing that gets me is that we now cannot help doctors in war zones, if somebody is watching what we are doing and blows up the hospital then that is a war crime.

It is a crime against humanity that you can’t even help a doctor in another country carry out an operation. It is a travesty.

BBC Newsnight first broadcast footage of the jaw reconstruction surgery on September 13, 2016. The operating theater was hit on October 3.

While the hospital was attacked by pro-Assad forces at least 17 times, but Nott believes that the obtaining of coordinates allowed the theater to be targeted.