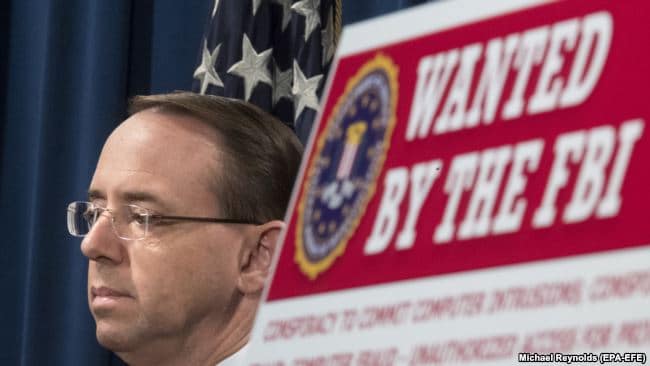 US authorities have charged nine Iranians and an Iranian company over hacking scheme which the Americans say stole “massive amounts” of data from hundreds of universities, dozens of companies, the UN, and parts of the US Government.

Deputy Attorney General Rod Rosenstein announced the charges on Friday: “For many of these intrusions, the defendants acted at the behest of the Iranian Government and, specifically, the Islamic Revolutionary Guards Corps.

Officials said the defendants were affiliated with the Mabna Institute, a company which they claimed has conducted hacking on behalf of the regime for several years.

Rosenstein said those charged could face extradition in more than 100 countries if they travel outside Iran.

One of the named individuals, Behzad Mesri, was charged in 2017 with hacking into computers of the cable TV network HBO, stealing episodes and plot summaries for unaired programs — including Games of Thrones — and threatening to release the information unless he was paid $6 million.

The Justice Department said the Mabna Institute stole more than 31 terrabytes of academic data and intellectual property from 144 US universities and 176 universities in 21 other countries. More than 100,000 professors were targeted, with hackers breaking into the accounts of about 8,000 of them.

Prosecutors said the Labor Department, the Federal Energy Regulatory Commission, and the UN were also targets.

He asserted, “The US will definitely not benefit from the sanctions gimmick aimed at stopping or preventing the scientific growth of the Iranian people.”