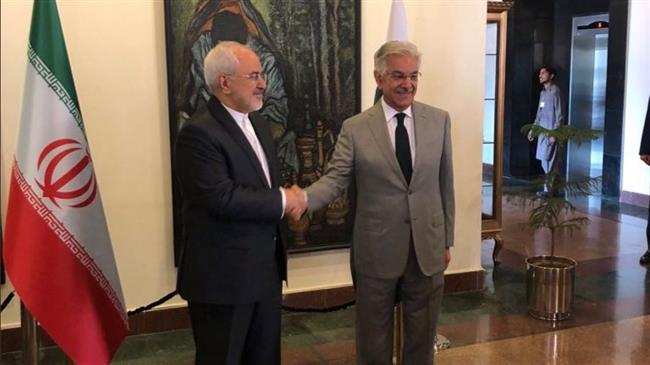 Zarif held talks on Tuesday with Pakistani counterpart Khawaja Mohammad Asif and other officials on matters including border security, trade, and regional relations, including with Pakistan’s historic rival India. The Foreign Minister is accompanied by a large delegation of politicians and business leaders on the three-day visit.

Zarif told reporters yesterday, “It is necessary for Iran and Pakistan, as two friendly neighbors with common border, to have strong cooperation to guarantee the security of the countries’ borders and prevent activities by the terrorists.”

Relations between Iran and Pakistan have been periodically strained by attacks on Iranian forces by insurgents in Sistan and Baluchestan Province in the southeast of the country. Tehran’s officials have accused Pakistan of providing effective sanctuary by failing to take action against the groups.

Zarif promised on Monday that, in return for Pakistani cooperation, Iran will ensure its territory is not used by any insurgents against Pakistan.

The Foreign Minister also tried to balance between Iran’s developing relations with India, vital for the Islamic Republic’s economic recovery, and with Pakistan.

See Who is Winning the “Great Balancing Game” Between Pakistan, India, Saudi Arabia, and Iran?

The Indians and Iranians are developing Chahbahar as the trade link between India, the Persian Gulf, Iran, and central Asia. The $85 million project is just 90 km (56 miles) from the Chinese-backed Gwadar port in Pakistan.

Iran has also been unsettled by the deployment of Pakistani troops in Saudi Arabia, for training and logistics, as the Saudis lead a deadly military intervention in the Yemen civil war.

See Who is Winning the “Great Balancing Game” Between Pakistan, India, Saudi Arabia, and Iran?