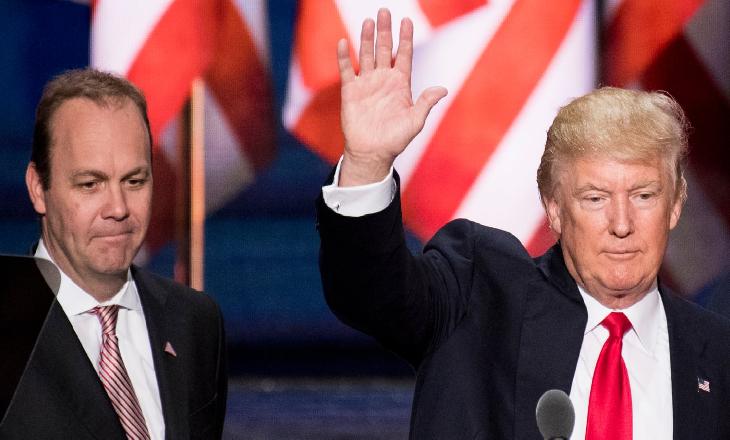 Developments on Day 400 of the Trump Administration:

Gates, the third Trump associate to accept guilt, is now cooperating with Mueller’s team. His plea could increase pressure on Manafort, indicted along with his aide in October, to also provide information.

Gates and Manafort were accused of money laundering, tax, and lobbying charges over their political consultancy with a pro-Russian Ukrainian party and movement of millions of dollars through foreign and US banks. Additional charges were filed earlier this week and Gates’ lawyer pleaded guilty to lying to prosecutors.

One of the meetings cited in the indictment, a 2013 discussion of pro-Russian interests in Ukraine, also included Congressman Dana Rohrabacher, an ardent defender of Moscow who has been under scrutiny for his links with Russian officials.

Gates was Manafort’s top aide for more than a decade, including most activities during the campaign, and remained close to the Trump camp after Manafort stepped down as campaign manager in August 2016.

Manafort vowed on Friday to maintain his fight against the charges:

I continue to maintain my innocence. I had hoped and expected my business colleague would have had the strength to continue the battle to prove our innocence. For reasons yet to surface he chose to do otherwise. This does not alter my commitment to defend myself against the untrue piled up charges contained in the indictments against me.

Kushner — under scrutiny over his meetings with foreign officials and initial failure to disclose the conversations and his financial interests — is continuing to view top-secret intelligence with an interim security clearance. He is Trump’s envoy for the Middle East and involved in other key foreign policy areas.

But on February 16, White House Chief of Staff John F. Kelly said personnel with interim clearances will no longer be able to view top-secret information. Trump could give Kushner a high-level security clearance, but said on Friday that he will leave the decision to Kelly.

Kushner’s lawyer Abbe Lowell insisted nothing is unusual about the further delay:

My inquiries to those involved again have confirmed that there are a dozen or more people at Mr. Kushner’s level whose process is delayed, that it is not uncommon for this process to take this long in a new administration, that the current backlogs are being addressed, and no concerns were raised about Mr. Kushner’s application.

Security clearance experts said it is rare for an individual to have such a high level of interim clearance for such a long period of time. Typically, senior officials do not get interim access to top-secret and compartmented material, for the sake of protecting sensitive sources, for more than three months.

Kelly has told associates that he is uncomfortable with Kushner’s uncertain security clearance status and his unique role as both a family member and staffer, according to “people familiar with the conversations”. He said he would not be upset if the president’s son-in-law and his wife, Ivanka Trump, left their positions as full-time employees.