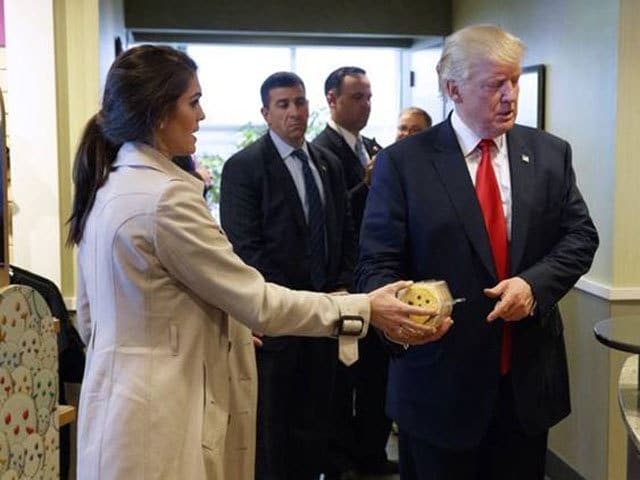 Aboard Air Force One on a flight home from Europe last July, President Trump and his advisers raced to cobble together a news release about a mysterious meeting at Trump Tower the previous summer between Russians and top Trump campaign officials. Rather than acknowledge the meeting’s intended purpose — to obtain political dirt about Hillary Clinton from the Russian government — the statement instead described the meeting as being about an obscure Russian adoption policy.

The statement, released in response to questions from The New York Times about the meeting, has become a focus of the inquiry by Robert S. Mueller III, the special counsel investigating Russian interference in the 2016 election. Prosecutors working for Mr. Mueller in recent months have questioned numerous White House officials about how the release came together — and about how directly Mr. Trump oversaw the process. Mr. Mueller’s team recently notified Mr. Trump’s lawyers that the Air Force One statement is one of about a dozen subjects that prosecutors want to discuss in a face-to-face interview of Mr. Trump that is still being negotiated.

The revelation of the meeting was striking: It placed the President’s son and his top campaign officials in direct contact with a Russian lawyer who promised damaging information on Mrs. Clinton, and an email to the President’s son emerged saying that the information was part of Russia’s effort to help the Trump campaign. The Special Counsel is investigating how those revelations were handled in real time in part because the President was involved in his administration’s response.

Some lawyers and witnesses who have sat in or been briefed on the interviews have puzzled over Mr. Mueller’s interest in the episode. Lying to federal investigators is a crime; lying to the news media is not. For that reason, some of Mr. Trump’s advisers argue that Mr. Mueller has no grounds to ask the president about the statement and say he should refuse to discuss it.

What is already clear is that, as Mr. Trump’s aides and family members tried over 48 hours to manage one of the most consequential crises of the young administration, the situation quickly degenerated into something of a circular firing squad. They protected their own interests, shifted blame and potentially left themselves — and the President — legally vulnerable.

A New Witness About Obstruction of Justice

The latest witness to be called for an interview about the episode was Mark Corallo, who served as a spokesman for Mr. Trump’s legal team before resigning in July. Mr. Corallo received an interview request last week from the Special Counsel and has agreed to the interview, according to three people with knowledge of the request.

Mr. Corallo is planning to tell Mr. Mueller about a previously undisclosed conference call with Mr. Trump and Hope Hicks, the White House communications director, according to the three people. Mr. Corallo planned to tell investigators that Ms. Hicks said during the call that emails written by Donald Trump Jr. before the Trump Tower meeting — in which the younger Mr. Trump said he was eager to receive political dirt about Mrs. Clinton from the Russians — “will never get out”. That left Mr. Corallo with concerns that Ms. Hicks could be contemplating obstructing justice, the people said.

In a statement on Wednesday, a lawyer for Ms. Hicks strongly denied Mr. Corallo’s allegations.

“As most reporters know, it’s not my practice to comment in response to questions from the media. But this warrants a response,” said the lawyer, Robert P. Trout. “She never said that. And the idea that Hope Hicks ever suggested that emails or other documents would be concealed or destroyed is completely false.”

How a False Memo Was Constructed

Early on the morning of Friday, July 7, reporters from The Times approached White House officials and lawyers with questions about the Trump Tower meeting a year earlier. The reporters said The Times was preparing a story revealing that the meeting with the Russians had taken place, and asked the White House for more information about its purpose.

The President and senior White House officials were in Germany for the G-20 summit meeting and asked for more time to respond, citing the time difference and conflicting schedules. They scheduled a conference call with the reporters for early the next morning.

The call never happened, so the Times reporters submitted a list of 14 questions about the meeting to the White House and to the lawyers of the Trump campaign aides who attended the meeting. Among the questions: What was discussed, and what did the attendees think was going to be discussed?

President Trump’s aides received the list midflight on Air Force One on the way back from the summit meeting and began writing a response. In the plane’s front cabin, Mr. Trump huddled with Ms. Hicks. During the meeting, according to people familiar with the episode, Ms. Hicks was sending frequent text messages to Donald Trump Jr., who was in New York. Alan Garten, a lawyer for the younger Mr. Trump who was also in New York, was also messaging with White House advisers aboard the plane.

Marc E. Kasowitz, the president’s personal lawyer, was not included in the discussion.

The President supervised the writing of the statement, according to three people familiar with the episode, with input from other White House aides. A fierce debate erupted over how much information the news release should include. Mr. Trump was insistent about including language that the meeting was about Russian adoptions, according to two people with knowledge of the discussion.

By early afternoon, The Times received a separate statement, from Jamie S. Gorelick, a lawyer at the time for Jared Kushner, the president’s son-in-law and senior adviser. The statement said little about the meeting, except that Mr. Kushner had “briefly attended at the request of his brother-in-law Donald Trump Jr.”

It left nearly all of the questions unanswered — and seemed to put the onus on Donald Trump Jr. to answer them. Nearly four hours later, the statement that had been cobbled together aboard Air Force One was sent to The Times. The statement was in Donald Trump Jr.’s name and was issued by Mr. Garten.

“It was a short introductory meeting,” it read. “I asked Jared and Paul to stop by. We primarily discussed a program about the adoption of Russian children that was active and popular with American families years ago and was since ended by the Russian government, but it was not a campaign issue at that time and there was no follow up.”

According to four people familiar with the discussions, Donald Trump Jr. had insisted that the word “primarily” be included in the statement.